Baby Emilia was delivered at 26 weeks after doctors feared she wasn’t getting enough nutrition, and at 8 ounces, some experts believe she’s the lightest preemie ever born.

A fetus in the 26th week of pregnancy typically weighs around 21 ounces, the girl’s doctor, Dr. Sven Schiermeier, told Central European News (CEN). Emilia was born in a hospital in the western German city of Witten.

Schiermeier and his team decided to deliver her by caesarean section because the placenta wasn’t providing sufficient nutrition and they feared she would die in the womb.

"Even children with a birth weight of 14 ounces rarely survive,” he told CEN. “We have to thank Emilia as well for her own survival. She is a little fighter."

Emilia’s parents, Lukas and Sabine Grabarczyk, told CEN there was no question they were going to give their child a chance, even if the odds for her survival were low.

Because of her premature birth, Emilia has an increased risk of hyperactivity and learning difficulties, but so far she shows no signs of serious disability.

She was initially fed with a tiny tube, and doctors used a cotton swap soaked in sugar water to soothe her and relieve pain, CEN reported. When she was just 12 ounces, she underwent abdominal surgery.

“There were many difficult days and many tears, but she clearly wanted to survive,” Sabine told CEN.

Now, at 9 months old, she weighs 106 ounces and is becoming more robust.

According to CEN, the previous record for lightest premature baby was held by Rumaisa Rahman, who was delivered at 25 weeks and weighed 8.6 ounces. 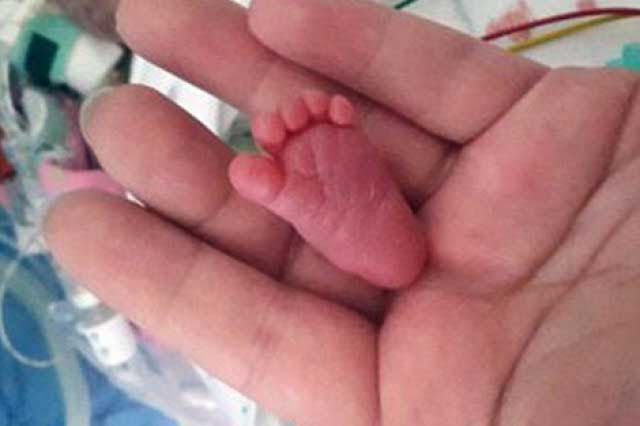