Here, we report the existence of meningeal lymphatic vessels in human and nonhuman primates (common marmoset monkeys) and the feasibility of noninvasively imaging and mapping them in vivo with high-resolution, clinical MRI. On T2-FLAIR and T1-weighted black-blood imaging, lymphatic vessels enhance with gadobutrol, a gadolinium-based contrast agent with high propensity to extravasate across a permeable capillary endothelial barrier, but not with gadofosveset, a blood-pool contrast agent. The topography of these vessels, running alongside dural venous sinuses, recapitulates the meningeal lymphatic system of rodents. In primates, meningeal lymphatics display a typical panel of lymphatic endothelial markers by immunohistochemistry. This discovery holds promise for better understanding the normal physiology of lymphatic drainage from the central nervous system and potential aberrations in neurological diseases. 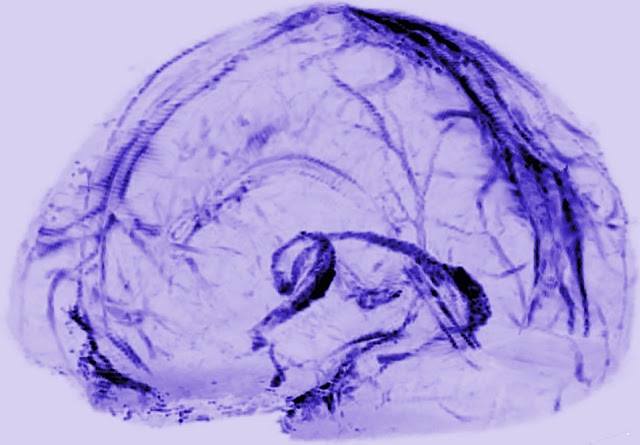 You are now among the first people to see the brain’s lymphatic system. The vessels in the photo above transport fluid that is likely crucial to metabolic and inflammatory processes. Until now, no one knew for sure that they existed.

Doctors practicing today have been taught that there are no lymphatic vessels inside the skull. Those deep-purple vessels were seen for the first time in images published this week by researchers at the U.S. National Institute of Neurological Disorders and Stroke.

The lymph vessels probably escaped detection because they’re inside a thick membrane, the dura mater, which is the consistency of leather. They run alongside blood vessels that are much larger, and on MRI the signal that creates the images is dominated by the blood vessels.

Reich adds the other obvious but important factor: “And, I mean, no one was looking for them.”…
The assumption was never that the brain doesn’t drain waste. The major pathway taught in medical school is that waste around cells goes into cerebrospinal fluid—the clear fluid that bathes the brain and spinal cord—and from there gets absorbed directly into the blood through structures called arachnoid granulations. Reich also explained that some fluid is understood to drain through tiny pores in our skulls, mostly at the top of our noses, and then get absorbed into the lymphatic system through the mucous membranes of the nose, and then, from there, go down into the lymph nodes of the neck.

It now seems clear that there is a third pathway through which byproducts get out of the brain—and it may be the most important—through these specialized vessels in the dura mater.

“Looking back, those other two really seem insufficient,” said Reich.

It remains a mystery exactly how that lymph fluid gets into these vessels. There are a lot of open questions that show how far we are from fully understanding many neurologic disorders—or even basic day-to-day functioning of the nervous system.

Courtesy of Doximity
Posted by Galen Breningstall, MD at 10:26 PM