After her fertility treatments, Egyptian Naglaa Mohamed felt blessed when she found out she was pregnant with twins. However, the pregnancy was difficult, and Naglaa often was left extremely tired and weak. But it wasn't until the delivery the doctors discovered something was terribly wrong. Just minutes after the first baby, Manar, was born, doctors faced serious complications with the remaining twin.

Doctors performed an emergency C-section and quickly learned that the second baby was conjoined…attached at the head! 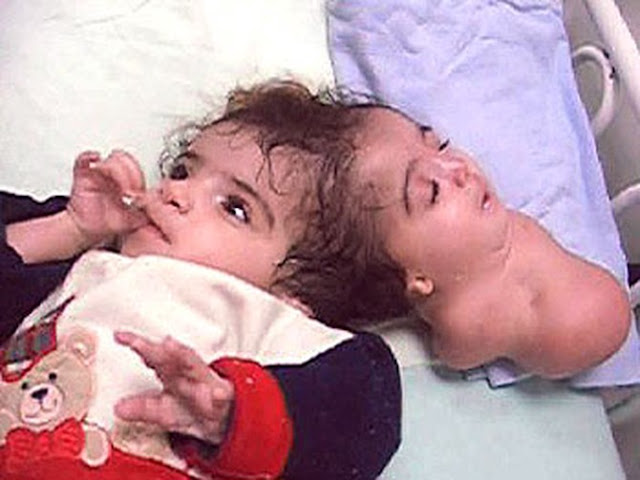 However, that's not all! The twins had the most unusual birth defect in the world. There are only 10 documented cases in history of craniopagus parasiticus, where one of the conjoined twins fails to fully develop a body. The head of the attached child—later named Islaam—was fully developed with eyes, a nose, mouth and even a brain. It was able to blink and smile but was not able to survive on its own.

"If you look to the babies from the front, you can see quite clearly Manar has her own face, but from the side she's completely attached to her other twin," says Dr. Abla El Alfi, one of the doctors involved in the procedure to detach Islaam from Manar. "Islaam had completely different reactions than Manar. Sometimes Manar was smiling and Islaam was crying. And you can see the different facial reactions of the two babies."

Manar and Islaam had two different brains but shared a common blood vessel that fed off of Manar's vital organs. Because Islaam was so dependent on Manar's body for survival, Manar suffered severe heart failure six times in the first few months of her life. Keeping Manar alive was a daily struggle.

"Islaam didn't have a heart to survive on," Dr. El Alfi explains. "She was surviving on the heart and lungs of Manar. She was getting nutrition from Manar. She was exchanging gases through Manar's lungs. And she was having blood supplied from Manar's heart."

For 10 months, Manar and Islaam remained in the hospital until Manar's condition became so critical doctors feared she wouldn't survive without a miracle.

Because Islaam was literally sucking the life out of Manar, doctors were forced to perform a radical surgery they had never done. In fact, it had only been attempted once in history, and no child had ever survived it! A team of 14 doctors from Benha Children's Hospital outside of Cairo was assembled to perform the highly complicated surgery. The Benha Children's Hospital is a national government referral center that receives critically ill cases from all over Egypt. The team included Dr. Walid Sharshera, neurosurgeon; Prof. Mohamed Farouk, lead anesthesiologist; Dr. Nassif Hefnawi, lead plastic surgeon; Dr. Abla El Alfi, head of the intensive care team; and Prof. Mohamed Lottfy, lead neurosurgeon.

"It was very risky surgery," Dr. El Alfi says. "The mortality rate is 100 percent because nobody had survived it. We had a lot of meetings and we reviewed all the literature of what had happened in cases like this all over the world."

The only other time this was attempted was in the Dominican Republic, where doctors operated on 8-week-old Rebecca Martinez who was also born with a parasitic head. Sadly, she did not survive.

After months of preparation, the team of surgeons worked seven hours straight to carefully separate Manar from the undeveloped twin. The most critical part of the operation was the actual separation of the two brains, which took another two hours. If not done properly, Manar would die.

Here's the miracle: Manar survived! She is the first baby in the world to ever survive this surgery.

Prof. Lottfy was the first doctor consulted. "The first time when I saw her, I went there and examined [Manar] and when I looked at the eyes, you can see the individual, she's searching for help," he says. "She's saying, 'Help me.' She's searching all over. Then I became emotionally attached to her. And I decided from the first moment to rescue [her]. Then I talked about my decision with Manar's doctors and went, again, to Cairo. I chose my team. I said to them, 'We have a mission to rescue Manar. If you accept this mission, to be devoted at any time to go to Benha, free of charge, we shall go over and rescue Manar. If you accept this, be with me.'"

How was Manar able to survive this miraculous procedure? "She survived for many reasons…she survived six attacks of heart failure. She was really determined and a fighter," Prof. Lottfy explains.

Manar is now doing so well she was recently able to leave the hospital for the very first time since she was born. And her first trip is all the way from Egypt to The Oprah Winfrey Show!

Objective: Craniopagus parasiticus is an extremely rare condition. The first attempt to separate such twins was performed in the Dominican Republic in 2004. The infant died 7 hours after surgery. The aim of this report is to present a case in which surgical separation was successfully performed on February 18, 2005. In February 2006, the child was still alive and in relatively good health.

Methods: The authors operated on a patient with craniopagus parasiticus at Benha Pediatric Hospital in Egypt, 45 km north of Cairo. The child was 10 months old when the surgery was performed. By minimizing the time of surgery and adequate control of intraoperative bleeding, a successful surgical separation was achieved. Computed tomography, magnetic resonance imaging, magnetic resonance angiography, and computed tomographic angiography provided the information necessary to perform surgery.

Results: The child underwent operation at the age of 10 months; the duration of surgery was 9 hours. Bleeding was the most serious problem, with the child receiving four liters of blood. The main arterial supply to the parasite was via the middle cerebral artery and was ligated in the Sylvian fissure. Bleeding, however, was mostly venous and was mainly controlled by diathermy and thrombin soaked packs of Surgicel, as well as clipping. After separation of the parasitic head, the dura was repaired using artificial dural grafts. Free bone flaps from the parasite were used to cover the osseous defect in the autosite. Skin flaps from the parasite were also used to cover the cranium.

Conclusion: This is the second case of craniopagus parasiticus in which separation was attempted. The first patient, operated on in the Dominican Republic, died 7 hours after surgery. In the present case, the child is still alive and without neurological deficit.