Monday, Alta Fixsler passed away after the government of the United Kingdom sentenced her to death. She committed no crime or wrongdoing. She was just 2 years old, innocent as could be. But Alta suffered from a severe hypoxic ischemic brain injury.

Doctors at the Royal Manchester Children’s Hospital Pediatric Intensive Care Unit in Manchester, United Kingdom, concluded that Alta’s life was not worth living. Her parents, both devout Hasidic Jews, objected to the decision since their faith requires them to protect and uphold the dignity of every life.

But the government decided that it has the power to decide if Alta’s life was worth living. A British High Court ignored the Fixslers’ wishes and upheld the doctors’ decision. When Alta’s parents appealed to the European Court of Human Rights, it too upheld the decision.

The High Court showed a complete disregard for the Fixslers’ Jewish faith, insisting, "Alta is not of an age, nor in a condition to have knowledge of and to adopt her parents’ values." Yet, according to Jewish culture, Alta was a member of the faith at conception. The government’s contempt for religious freedom and life itself is despicable.

And Alta did have a chance at life, just not in the United Kingdom. Both Israel and the United States offered to assess Alta’s state and provide treatment. Alta was not only a child of God; she was the daughter of an American citizen.

Her parents fought hard for relocation and secured a visa for Alta to come to the United States. But in an act of callousness, and for no discernible reason, the British and European courts denied her the opportunity to travel to America or Israel for continued care. Instead, they sentenced her to death.

The U.K.’s High Court of Justice was explicit, writing, "that there was a risk that, once [Alta] was transferred to Israel, the decision of the judge that her treatment should be withdrawn would be reversed, contrary to her best interests." In other words, the court deemed living was not in her best interest.

The stunning statement demonstrates the incredible foresight of America’s founders. The Declaration of Independence asserts, "We hold these truths to be self-evident, that all men are created equal, that they are endowed by their Creator with certain unalienable Rights, that among these are Life, Liberty and the pursuit of Happiness."

Alta Fixsler, the two-year-old, brain-damaged child at the center of a legal battle between her parents and the U.K. National Health Service, passed away Monday night, approximately 90 minutes after medical personnel removed her the machines that had kept her alive since her birth.

A minyan was gathered around Alta in her hospice room, singing songs of hisorerus, until around 6:25 p.m. local time (1:25 ET), when the doctors and nurses walked in, and Avraham and Chaya Fixsler kissed their daughter, as the hospital personnel removed her from life support.

A minyan gathered in Alta Fixsler’s hospice room in the moments before she was removed from life support.

Alta Fixsler suffered a severe brain injury at birth, and was unable to breathe or eat on her own. The Manchester University NHS Foundation Trust, the hospital system responsible for Alta’s care under the U.K. National Health Service, said that there was no potential for her condition ever to improve, there was no medical benefit to continuing her life support, that she suffered pain and it would be humane to remove her from life support.

But the Fixsler family, as Orthodox Jews, insisted that Alta be kept alive. The family undertook an extensive lobbying and outreach effort, with U.S. and Israeli governments interceding with the British government on Alta’s behalf, asking that the girl, whose mother is Israeli and father is Israeli-American, be allowed to leave to one of those countries for medical treatment. Jewish charitable organizations had arranged transport, and there would be no cost to the U.K. government.

But the British courts upheld the hospital’s determination that Alta’s life support be removed, and the political lobbying effort was unsuccessful. The family even lost a final battle to at least be allowed to bring their daughter home to die, when a court ruled earlier this month that the withdrawal of treatment must be done in a children’s hospice. 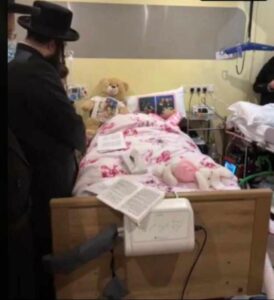 Avraham Fixsler stands near the bed of his daughter Alta, shortly before she was removed from life support.

After she was removed from the machines, Alta breathed on her own for approximately 90 minutes, with her oxygen levels continually fluctuating. Shortly before 8 p.m., she breathed her last.

Moments after Alta’s passing, Rabbi Moshe Dovid Niederman of the UJO of Williamsburg, one of the askanim who lobbied on Alta’s behalf, told Hamodia, “Baruch Dayan Ha’emes. We mourn the loss of the life of precious Alta bas Avraham a”h, dear not only to her parents, but to the Jewish community, and all people around the world who value human life.

“It is especially devastating that the U.K. rejected the pleas from both the US. and Israel, two of the U.K.’s closest allies, that the U.K. allow Alta to be sent to one of those countries, which were willing to provided her care. Why was this chance for the child to live denied?

“Instead of following the Hippocratic oath to ‘do no harm or injustice’ to their patients, doctors today took an action that resulted in their patient’s death.

“This utter travesty against this helpless, pure, lovely child, will never be forgotten. A country that supposedly doesn’t have capital punishment, today enacted a death penalty couched in fancy legalese.”

In a statement to Hamodia, Sen. Schumer said, “I extend my prayers and support for the Fixsler family during this very difficult time. May Alta’s memory be a blessing. I continue to believe the policy followed here was wrong on many levels and regret that our multiple, and legally and morally, well-grounded pleas were unheeded by the British authorities.”

Seven hundred mourners gathered for the funeral Monday night outside the Belz Beis Hamedrash in Manchester.

The Belzer dayan, Harav Ahron Grinfeld shlita, noted how the entire kehillah came together for the young Alta, a”h and her family, and how this was emblematic that she serves as a karban tzibbur, as a holy neshamah that left this world in purity.

Rav Saadya Grinfeld spoke emotionally about Mr. and Mrs. Fixsler, who had accepted the decrees of Hashem without question.

Rav Yisroel Goldberg contrasted the devotion of the Fixsler parents with the “values” of a world that considers it merciful to end the life of a child.

Alta’s father then bid his daughter farewell in an emotional hesped, telling her that he did whatever he could, and that as a Yid he did what a Yid must do. He mentioned that a father can never do enough, and perhaps there was some avenue they did not cover, but nevertheless he tried his best. He begged that Alta should plead at the kisei hakavod that Hashem should give strength to her mother and the entire family to continue on.

Kevurah will be in Eretz Yisrael.