A little girl who miraculously survived being struck by a car three years ago is defying the odds, as

she celebrates a special milestone amid her continuous recovery.

After months of surgeries and years of therapies, Shaylie Edwards, now 6, was able to achieve the incredible: She graduated from kindergarten.

"This kid was just meant to do something amazing," Shaylie’s mom, Erica Edwards of Reno, Nevada, told Fox News Digital.

On June 6, 2019, Shaylie had finished her last day of preschool and was ready for summer break.

After dinner, she and her then-7-year-old sister Emma convinced their dad, Shannon Edwards, to take them to a nearby park to play.

Erica Edwards stayed behind to do the dishes and had the windows open. Suddenly, she heard a commotion outside.

"I ran out back, looked over my fence and right in my vision was Shaylie on the road," Edwards said.

A car coming along the crosswalk hit both Shaylie and her father.

When he saw the car coming toward them, dad Shannon Edwards lifted Shaylie up to get her out of the way — but when the car hit him, he lost his grip on his daughter.

Shaylie hit the hood of the car and flew 40 feet in the air before she landed on the pavement, Erica Edwards told Fox News Digital.

The helmet the girl had been wearing — because she was planning to ride her scooter in the park — was smashed to pieces.

Erica and a bystander performed CPR on little Shaylie until paramedics arrived.

Shaylie rode in one ambulance while Erica Edwards and her husband rode in another to Renown Medical Center in Reno.

Dad Shannon Edwards, 46, suffered seven fractures in his face; he needed full facial reconstruction. In total, he spent two-and-a-half weeks in the hospital. Today he has four permanent titanium plates in his face, said Erica Edwards. 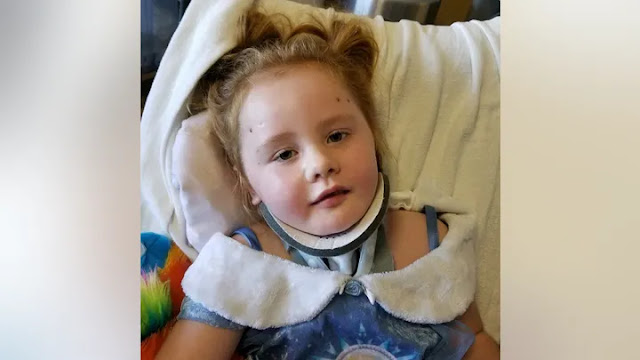 As the hospital's trauma team performed tests on Shaylie to determine her treatment, Erica Edwards asked to stay with her daughter.

Because the mom was surprisingly calm, the hospital team let her in the room. That calm, Erica explained, came from God.

"I was a very spiritual person before this — I always believed in God, but I [wasn’t] much of a churchgoer, not much of a follow-the-Bible-to-the-book type of person," she said.

"But I'm a full believer now … God speaks to me all the time. And it was through this accident that this voice came to me."

"It was a lot of just, ‘Stay calm, just stay calm,’" she said. "It has to be a higher power, a God, a somebody who was just kind of grounding me for what was to come."

"If it wasn't for that grounding, I wouldn't have gotten through the last three years of fighting to get my baby back, because it has been a literal fight every single day."

Shaylie was moved to the pediatric ICU (PICU), where she was in the care of Dr. Kris Deeter, a pediatric intensivist at Renown Children’s Hospital in Reno and the medical director for Pediatrix Critical Care and Hospitalists of Nevada.

"I could tell right away that we were dealing with a pretty severe brain injury," Dr. Deeter told Fox News Digital. "She was completely unresponsive, she had no reflexes at that time, no motor movement right away … I knew that she was going to have a hard, long road."

During Shaylie’s first five days in the hospital, doctors focused on protecting her brain from further injury, such as swelling or bleeding.

Once her brain was stabilized, the medical team checked Shaylie’s lungs, kidneys and liver to ensure they were functioning properly, Deeter said.

Then, doctors moved to get Shaylie off the ventilator and off sedatives, so she could start to regain her strength and begin the recovery process.

After two weeks in the PICU, Shaylie finally opened her eyes. That, for Dr. Deeter, was a turning point in Shaylie’s care.

"When we started seeing that little twitch and that little smile come out, we all knew we were good," Deeter said. "She's a fighter."

It was also the moment that Erica Edwards knew her baby girl was going to be OK.

"When you saw her eyes open, you knew that something was going to come of this young lady," Erica said. "She wasn’t going to be in the hospital forever."

"I think it’s that moment when her eyes opened, and they were so clear that the fire just started in me," Erica added. "I knew I had to do whatever I could … to get her back."

After three months in the hospital, Shaylie headed to rehab in Los Angeles. Weeks later, she returned

"For us to get released from Renown and go home was scary, but such a relief," Erica said. "Our family hadn’t been home in three months, so that part was amazing. But then the rehabilitation started and it was scary."

Shaylie was 4 years old at the time, but when doctors evaluated her, they determined she was at the level of a 5-month-old.

For the first year-and-a-half, Shaylie attended rehab five days a week. When she wasn’t in therapy, her parents were working with her at home.

Finally, after months of hard work, Shaylie regained her ability to eat, talk and walk, with the help of a walker that she used. 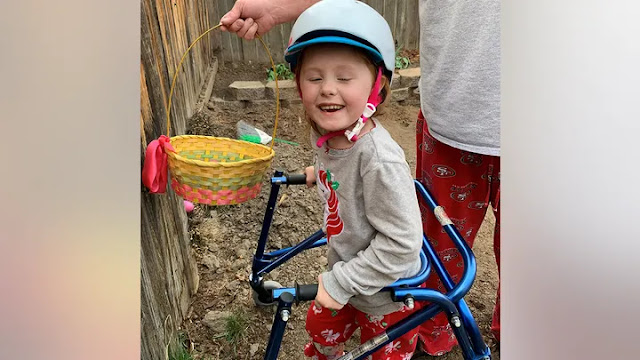 "So many steps were involved in doing that," Erica said of Shaylie’s therapies. "The list is amazingly huge of all the work her therapists did."

Through it all, Erica said faith helped her family move forward.

"Faith for me and my journey has been a number-one priority," said Erica Edwards. "To recognize that and follow it just makes things a lot easier on the day-to-day, because this fight is real."

"I’m going to have to continue to fight for her for years," she added. "I don’t know that it’ll ever stop. I hope that there’s a day, but I’m not sure. And my faith is what’s getting me through. It’s a beautiful thing."

Today, Shaylie is still in speech, occupational and physical therapies, but she continues to improve. The family is also looking for new and improved intensive therapies to help Shaylie move forward, said Erica.

"We are willing to do whatever it takes to get this little girl her life back," she said.

Though it took roughly over a year for her to start forming words again, Shaylie is now just as chatty as she was before the accident.

Other things have returned, too.

"Some memories are even coming back," Erica Edwards said. "It's pretty amazing to hear her have memories and be the same sassy, funky, happy little girl."

"All those things are a huge, huge blessing, a blessing from God," the mom continued. "There's just something about her that God, the universe, whatever, didn't want to let go of. And I'm excited to see where this little girl's life takes off to," she added.

In June, Shaylie graduated from kindergarten. To celebrate, the Edwards family traveled to Disneyland. "We had a blast," Erica said.