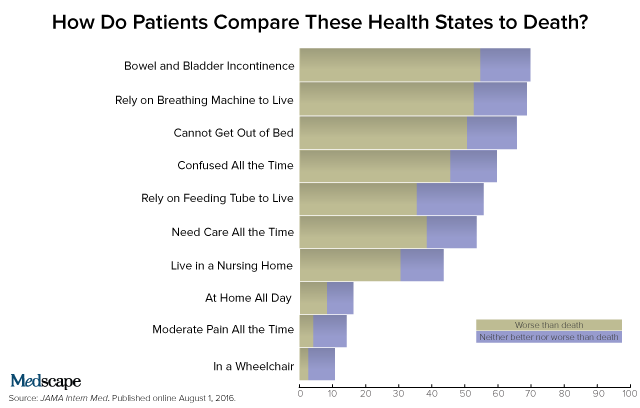 The authors of the study, published online August 1 in JAMA Internal Medicine, said their findings should challenge researchers of patient-centered outcomes and crafters of quality measures to consider new metrics "such as the avoidance of states worse than death."

Lead author Emily Rubin, MD, told Medscape Medical News that she doesn't believe most people with bladder and bowel incontinence, for example, would choose to die rather than continue living. The study was meant to be more qualitative than quantitative.

"I would not take this data too literally," said Dr Rubin, a fellow in pulmonary and critical care medicine at the Hospital of the University of Pennsylvania, Philadelphia. "But it's telling how patients answered the questions."

Asked to comment on the study, one leader in patient-centered outcomes research said the methodology was flawed and the percentages of patients identifying states worse than death misleadingly high.

Albert Wu, MD, MPH, a professor at the Johns Hopkins Bloomberg School of Public Health, Baltimore, Maryland, told Medscape Medical News that the Likert scale questionnaire administered to patients was too simplistic of a research tool to get at the truth. The standard, more nuanced way to discern patient preferences for health states is the use of "health utility" measures, said Dr Wu, director of his school's Center for Health Services and Outcomes Research.

One type of health utility measure takes the form of a time trade-off. To obtain a rating for blindness in one eye, an individual is asked to choose between two hypothetical choices — 20 years with such blindness, or 15 years with perfect health. If the individual chooses 20 years of partial blindness, the question is repeated, but with a lower number of perfect-health years. The goal is to arrive at two options — say, 20 years of partial blindness and 17 years of perfect health — that leave the individual indifferent about what to choose. That exercise produces a health utility rating of 85% (17 years divided by 20 years).

The standard gamble is another way to measure health utility, and its opposite, debility. In this hypothetical exercise, a person might be asked to imagine having CHF. He or she can either remain at the current level of CHF disability, or gamble on two other outcomes — a 100% chance of sudden death, or a probability of a cure, also expressed as a percentage. The interviewer varies the cure probability with the goal of reaching a point of indifference between remaining disabled, and taking the gamble.

Dr Rubin told Medscape Medical News that she had considered using a health utility measure in her survey, but ultimately chose a simpler approach, reiterating that she wasn't striving for quantitative precision. In addition, the inquiry into health states was part of a larger study that did not lend itself to health utility measures, "which are hard to administer and time-consuming."

Dr Rubin's study points out several reasons why the findings should not be interpreted literally — that is, someone who views a condition as worse than death would rather die. Real-life patients who rank their condition this way may choose to receive life-prolonging care because they believe their health will improve. Or they may wish to endure something like incontinence or being bed-ridden for the sake of their family. In addition, they may underestimate how well they can adapt to, and tolerate, conditions originally deemed to be worse than death.

"There are people with incontinence who live full lives," said Dr Rubin.

That said, studies of various health interventions from surgery to medication need to consider outcomes besides mortality, given what they mean to patients, Dr Rubin said. Her study also has clinical implications.

"It points to the importance of understanding what any given person may find intolerable at the end of his or her life so we can individualize patient care," she said.