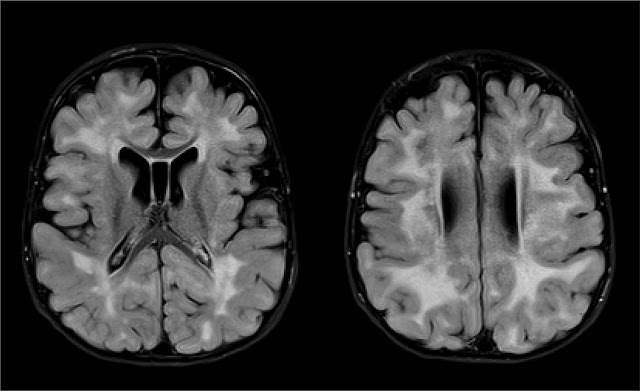 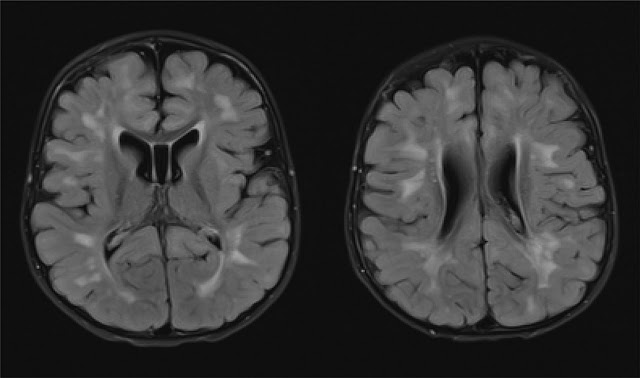 While delayed myelination has been reported, there are few reports of neuroimages. Awareness of the MRI presentation of JS is crucial to prevent unnecessary evaluation in this condition.

Abstract
This report presents two families with interstitial 11q24.2q24.3 deletion, associated with malformations, hematologic features, and typical facial dysmorphism, observed in Jacobsen syndrome (JS), except for intellectual disability (ID). The smallest 700 Kb deletion contains only two genes: FLI1 and ETS1, and a long noncoding RNA, SENCR, narrowing the minimal critical region for some features of JS. Consistent with recent literature, it adds supplemental data to confirm the crucial role of FLI1 and ETS1 in JS, namely FLI1 in thrombocytopenia and ETS1 in cardiopathy and immune deficiency. It also supports that combined ETS1 and FLI1 haploinsufficiency explains dysmorphic features, notably ears, and nose anomalies. Moreover, it raises the possibility that SENCR, a long noncoding RNA, could be responsible for limb defects, because of its early role in endothelial cell commitment and function. Considering ID and autism spectrum disorder, which are some of the main features of JS, a participation of ETS1, FLI1, or SENCR cannot be excluded. But, considering the normal neurodevelopment of our patients, their role would be either minor or with an important variability in penetrance. Furthermore, according to literature, ARHGAP32 and KIRREL3 seem to be the strongest candidate genes in the 11q24 region for other Jacobsen patients.

Abstract
Jacobsen syndrome refers to a congenital anomaly caused by deletion at 11q23.3-qter. We here describe two siblings with the same 11q23.3-qter deletion. Both parents were healthy with a normal karyotype. Cytogenetic microarray analysis revealed no mosaicism in either parent but the mother showed uniparental disomy encompassing the deleted region found in the two siblings. The pattern of X chromosome inactivation was almost completely skewed in the mother. These data suggested that the mother was a carrier of the 11q23.3-qter deletion but that this had been rescued by disomy formation during early embryogenesis except for her germinal cells.

Abstract
Jacobsen syndrome (JS) is a rare contiguous gene disorder caused by partial deletion of the distal part of the long arm of chromosome 11 ranging in size from 7 to 20 Mb. We report a term male neonate with an interstitial deletion of about 12.3 megabase (Mb) of chromosome 11q24.1qter. Our case is the first reported newborn patient with 11q24 deletion.
Posted by Galen Breningstall, MD at 11:21 AM