Sevy was born in Sofia, Bulgaria. Because she was born with an extra chromosome, in a place where she would never be accepted, she spent the first twelve years of her life in institutions. Her beginning was hard and filled with hurt and trauma. But in 2016, she was finally found and brought home to her forever family in Texas where she is now loved like crazy, living a life full of joy and adventure. Her family recognized her love for art from the beginning. She has flourished as an artist and has found her voice through her work.

When we first brought her home, she was very reserved and didn’t trust us and neither of us really knew how to communicate. Sevy is almost completely non-verbal. Being in institutions for 12 years, of course it’s going to be hard to trust anyone. Especially with me, being her primary caretaker, it was really difficult to bond with her because she wanted nothing to do with me.

We knew she enjoyed art because she was always drawing — even when we first met her in the orphanage. We didn’t think much of it at the time. I’m a writer and I like to write at night so Sevy would sit down next to me with a stack of paper and just draw all night.

About a year ago, I started paying a little more attention to her while she drew and realized she knew what she was doing and was a really good artist… we could tell that she had intention when she drew or painted.

The Eichers gave Sevy other supplies to work with –plywood, old house paint, and paint brushes. Using the house paint and a crowbar to get sharp lines, Sevy created a beautiful painting on the plywood with layers and layers of color. Lisa says:  That’s when we realized, she wasn’t just playing around, she was totally an artist.

Lisa, who is a lifestyle blogger, posted Sevy’s work on Instagram, and the positive response was overwhelming. The Eichers decided to provide Sevy with proper tools so she could fully develop her talent. Eventually, they also created an Instagram just for Sevy’s art – and she got over 10,000 followers overnight.

Now, Sevy has sold out two entire collections of her art- to buyers as far away as France and the Netherlands. Her whole family has come to together to help support her dream. Her dad Joey cuts the plywood and assembles the canvases. Her siblings help prep the canvases and name the paintings. And her mom Lisa takes pictures of Sevy with her finished works and posts them online.

The family is also starting a nonprofit called Sandal Gap Studios, with the goal to foster inclusivity in art by featuring works from artists with Down syndrome.

Lisa is amazed and thankful for the impact that Sevy’s artwork is having:

Sevy has really changed the whole trajectory of our lives which is just really cool and when you think about it — there was this 12-year-old girl with no hope in an institution in Bulgaria and now she’s having an impact on our world. It’s beyond changing our family, hopefully it’s changing a community and the world. It’s beyond just selling her art, that’s such a small part of it, she’s inspiring us to do more and be more.


The Eicher family seems like something out of a movie, and no, it’s not because they have pet pigs, a rabbit, a full-grown cat that still resembles a kitten, a tortoise, and five dogs (four of which only have three legs). Nor is it because mom, Lisa Eicher, has competed twice on American Ninja Warrior and is currently training for the upcoming season. It’s more than that.

The Houston-area Eicher family is a real life Incredibles family — each member coming together to battle misconceptions of the special-needs community.

High-school sweethearts Joey and Lisa Eicher have four children, each with bright personalities and full hearts, and two of which were adopted from Bulgaria and just happen to have an extra chromosome.

About a year ago, one of those adopted children with Down syndrome, Sevy Marie, completely changed the trajectory of the Eicher family’s lives forever.

Sevy Marie Eicher is an artist with Down syndrome. She was not always an artist, though. Just two years ago, she was living in an orphanage in Sofia, Bulgaria, where she grew up moving from one institution to another with little hope of being adopted because of her disability.

The Eicher family were no strangers to adopting from Bulgaria, or from adopting a child with Down syndrome, as they adopted Archie in 2011 at the age of 7. Archie, now 14, was brought home to a younger sister, Ace (now 10), and instantly connected with the family. The family added one more to the Eicher clan in 2014 when Radko was born.

In 2016, Lisa and Ace ventured back to Bulgaria to pick up Sevy and bring her home.

“She was on the older end for orphans,” Lisa Eicher says. “Usually orphans at her age aren’t even adoptable and are just sent off to institutions and lost. But as soon as we saw a photo of her we knew that she was our kid and we had to go get her.”

Sevy did not connect with the family as instantly as Archie had, though.

“When we first brought her home, she was very reserved and didn’t trust us and neither of us really knew how to communicate,” Lisa says. “Sevy is almost completely non-verbal. Being in institutions for 12 years, of course it’s going to be hard to trust anyone. Especially with me, being her primary caretaker, it was really difficult to bond with her because she wanted nothing to do with me.”

With little knowledge of Sevy — she had never gone to school, never seen a doctor, couldn’t communicate verbally — it was difficult for the Eicher family to bond with the Bulgarian 12-year-old. One thing they did notice early on, was that she liked to draw.

Like many children her age, Sevy would often spend her playtime doodling with crayons and markers.

“We knew she enjoyed art because she was always drawing — even when we first met her in the orphanage, ” Lisa recalls. “We didn’t think much of it at the time. I’m a writer and I like to write at night so Sevy would sit down next to me with a stack of paper and just draw all night.

“About a year ago, I started paying a little more attention to her while she drew and realized she knew what she was doing and was a really good artist. ”

“We don’t have any background in art whatsoever so we had no idea the extent of how good her drawing and paintings were, but we could tell that she had intention when she drew or painted.”

Curious to see what else Sevy could do, the family gathered some old sheets of plywood and house paint from the garage and asked Sevy if she would like to paint. She immediately started throwing paint onto the plywood and rummaging through the garage gathering tools like crowbars, scrapers, and old paint brushes to use.

The piece that resulted was a myriad of colors and textures. Sure, many may think it is all random, but when Sevy works you can see the gears turning in that head of hers. She uses each tool and each color carefully to get the effect she is looking for. While having a similar aesthetic and process, each piece produced by Sevy is completely different from the last.

“That’s when we realized, she wasn’t just playing around, she was totally an artist,” Lisa says.

Unsure of whether they were “just being those parents” who wanted to believe their child was exceptionally good at something, Lisa decided to post some of the photos of Sevy’s art on her social media. Being a lifestyle blogger with over 28,000 followers on Instagram, there were plenty of people who were ready to pitch in their thoughts.

Luckily, many of the comments consisted in things like, “Wow! That’s incredible work!” and “Did she really paint that herself?” 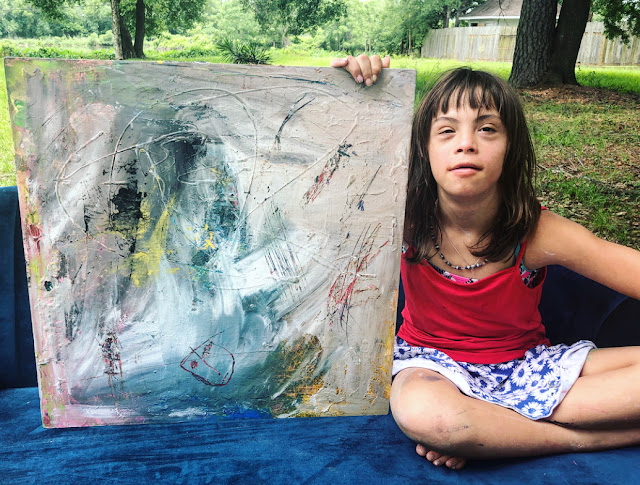 Knowing there was something truly artistic within Sevy, the Eichers set out to provide her with the right tools so she could truly begin to chase her passion. And it didn’t take long for people to take notice. After a few paintings were posted on Lisa’s social media, followers started requesting to buy the 13-year-old’s pieces…

Sevy Marie Art has sold out two collections in the past year (priced between $300 to $2,000 per work) in as little as 30 minutes. From locals to collectors in France, The Netherlands and Ireland, there is no cease in demand for these expressive pieces.

The first collection, “Girl Unlocked,” was about allowing Sevy to find her artistic voice through her paintings. It was also how the family realized they were all coming together to help contribute to each piece, and ultimately, the fight against misconception…

Each painting typically has about 10 layers on them before Sevy has deemed them finished. Being ambidextrous, her process is a flurry of paint. At certain times, she might have a crowbar in one hand and a foam roller in the other — texturizing and rolling out paint at the same time.


Of course she has to revitalize the creative juices with frequent dance parties involving the whole family before settling back down at a corner of the canvas and furiously painting away. Once Sevy feels the piece is finished and signs, someone in the family will name the piece.