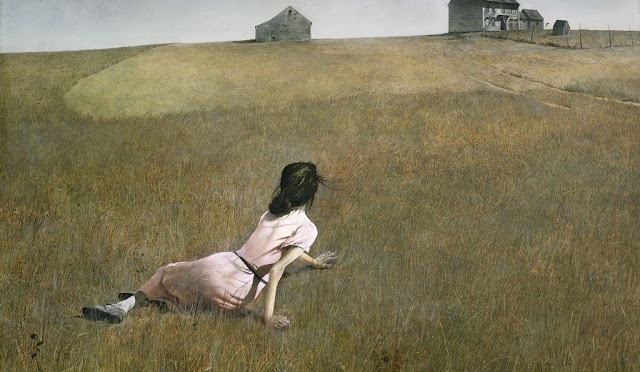 This figure, Christina Olson, suffered from a mysterious disease that gradually diminished her ability to walk. At the time, locals believed she had polio, but the disease was never definitely diagnosed before her death.

Olson was born in 1893, before the large-scale outbreaks of polio hit the U.S., writes to Christopher Wanjek at Live Science. As a three year old, she walked on the outer edges of her feet but her limbs gradually weakened, leaving her immobile in her 20s. She may have also lost some sensation in her limbs—when she fell asleep next to a stove in her 50s, she supposedly burned herself without noticing.

“All of these things to me speak against polio,” Patterson tells Wanjek. Polio symptoms tend to be worst at the beginning of the disease and improve over time, the opposite of Olson's experience. Instead, Patterson believes she suffered from Charcot-Marie-Tooth disease, a hereditary condition of the peripheral nerves that afflicts about 2.8 million people worldwide.

It is one of the most famous paintings in American history: Christina's World, by Andrew Wyeth. The painting, which hangs in the Museum of Modern Art in New York, depicts a young woman in a field, gazing at a farmhouse on an idyllic summer day.

But this lovely image has a dark side.

The subject in the painting is Christina Olson, Wyeth's good friend and neighbor. For most of her life, she suffered from a mysterious disorder, which slowly took away her ability to walk, and eventually to use her hands. She died at the age of 74 after a difficult life, and her disease has never been diagnosed.

After closely examining a range of evidence about her condition, Mayo Clinic child neurologist Marc Patterson has pinpointed a diagnosis. He thinks she likely had an early-onset form of Charcot-Marie-Tooth Disease, a group of inherited disorders that affect the peripheral nerves and can lead to significant problems with movement. He will deliver his diagnosis at the 23nd annual Historical Clinicopathological Conference, held Friday, May 6 at the University of Maryland School of Medicine. The conference is devoted to the diagnosis of disorders that afflicted historical figures; in the past, experts have focused on the diseases of luminaries such as Lenin, Darwin and Lincoln.

Dr. Patterson, a professor of neurology, pediatrics and medical genetics at the Mayo Clinic in Rochester, Minnesota, reviewed her medical history, and also considered Wyeth's art that portrayed her, including Christina's World.

"This was a fascinating case," he says. "This painting has long been a favorite of mine, and the question of Christina's ailment was an intriguing medical mystery. I think her case best fits the profile of this disease."

Also speaking at the conference will be Thomas B. Cole, associate editor for the Journal of the American Medical Association. Dr. Cole is an expert on art devoted to medical topics.

The conference was founded in 1995 by Philip A. Mackowiak, MD, Carolyn Frenkil and Selvin Passen History of Medicine Scholar-in-Residence at the University of Maryland School of Medicine. "This is a amazing piece of medical detective work," says Dr. Mackowiak. "It brings home the fact that medicine has learned enormous amounts in the past few decades."

In Christina's World, one of the most beloved works of American art, Andrew Wyeth painted Christina Olson crawling crablike across the field below her house, raised on emaciated arms, with a swollen knob for an elbow, and hands clenched and gnarled. The significance of these physical abnormalities, and the message Wyeth endeavored to convey via the portrait, are considered here in light of Christina's medical history and the disorder it most likely signifies.

She began life as a small, blond-haired girl with a “silver giggle,” who seemed no different from other children. However, by the time she reached the age of 3, she was walking on the outsides of her feet with on odd gait. Even so, she was a bright, fiercely determined child, who stomped around ignoring her disability as it gradually worsened. By the time she was 13 years old, she stumbled and fell frequently, though with a mind wonderfully “bright, curious and hungry.”…

Her letters at that time, however, told a different story, one involving a series of “bad falls…
Christina’s balance soon worsened to the point that it was unsafe for her to look up without having a firm grip on something to steady her. Although she was still able to walk, her crablike gait forced her to use the entire width of the road when ambulating. Her mother made her kneepads to wear under her skirt as protection against her many falls. Her hands as yet unaffected were capable of the intricate work of a talented seamstress…

By the time she reached 26, Christina could walk only 3 or 4 steps without assistance, and her hands had become so misshapen and unsteady she had to use her elbows, knees, and wrists to do those things formerly done with her hands. Offers of help were gently but firmly refused. By the end of her fifth decade, she had lost the ability to stand and had to crawl to get where she wanted to go, though her mind continued to be as sharp as ever…

When she was 56, she developed a severe illness thought to have been pneumonia. One evening, while recuperating, she sat with one leg stretched out beneath a stove and fell asleep. When she awoke, the heat from the fire had seared the flesh from her withered leg. The third-degree burn healed slowly in response to repeated application of cod liver oil….

Having eliminated these possibilities, only one of the hereditary motor and sensory neuropathies remains as Christina’s probable diagnosis—one that presents in childhood and follows a slowly progressive course over the life of the patient—in short, “Charcot-Marie-Tooth disease.”
Posted by Galen Breningstall, MD at 1:19 PM