At 3 ½ years of age, this boy was experiencing ponderous medical problems.  He was admitted for somnolence and lethargy.  At baseline he was bradycardic and his temperature was 36.5.  He had undergone a right frontotemporal parietal craniotomy for right functional hemispherectomy.  He had been treated with ketogenic diet and a vagal nerve stimulator.  He was receiving levetiracetam, valproate, oxcarbazepine and phenobarbital, as well as gabapentin (probably for irritability, not epilepsy).  Previous medications had included lacosamide and topiramate.  There had been numerous recent admissions for status epilepticus.

An electroencephalogram 5 months earlier had shown multifocal epileptiform discharges in the left hemisphere and right posterior quadrant, as well as suppression of the right hemisphere and slowed posterior dominant rhythm. 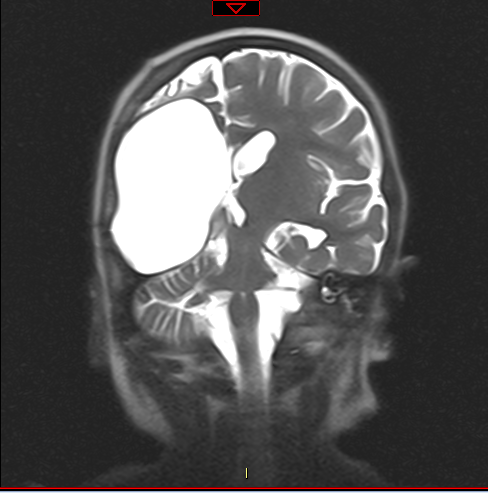 Shortly after admission, the patient had a fever of 40.3, which was treated aggressively with antibiotics.  No focus of infection was identified.  The patient was oliguric and fluid challenges did not increase urine output.  A renal ultrasound showed mild left hydronephrosis. He was having increased oxygen requirement from his baseline, most likely secondary to fluid overload from renal failure. CXR did not show pneumonia. He was placed on the hospital ventilator at family request to see if this would improve things. His oxygen requirement remained the same and his end tidal then also started to climb. He also progressively took less of his own spontaneous breaths over the ventilator rate until he was riding the ventilator rate only. Ventilatory support was tapered and discontinued. He was deemed to have septic shock and acute renal failure.

The family had discussed with the PICU team their desire to keep patient comfortable and treat reversible causes, but that if at any point the process seemed irreversible, that they would want to know.  When the patient became hypotensive, the family chose to take him back to hospice.  They understood that with renal failure, he wouldn't tolerate fluid resuscitation and that continued fluid overload would cause worsening respiratory status.  They also did not want to risk increased cardiac stress with vasopressors, since he was already hyperkalemic and acidotic.  They wanted to be able to transfer him while he was still stable and not risk a sudden cardiac event.  It was very important to them that he did not pass away in the hospital if possible.

The patient passed away nine days later in hospice.
Posted by Galen Breningstall, MD at 2:44 PM