Krysta Davis made the devastatingly brave decision in the hope that her little baby would enable other tots to live healthy, long lives.

When she was 18 weeks pregnant, Krysta, from Cleveland, Tennesee, was told that her daughter had anencephaly - a serious birth defect meaning that she'd be born without parts of her brain.

Doctors told Krysta, 23 and partner Derek, 26, that they could induce labour immediately or Krysta could carry her to term knowing that their daughter could die in the womb. At best, she'd live for a few days after being born.

Knowing that their time was limited, they savoured every moment of pregnancy.

Krysta, an assistant manager, said: “Carrying her to full term would mean we had the option to donate her organs so that other mothers could bring home their babies when we couldn’t.

“That sealed the deal for us, for the entire pregnancy the majority of our strength came from her, it was very positive, and we did everything we could like most parents do.

“We found out her favourite band was Fleetwood Mac and did a lot of normal parent things, but we also had an extra ounce to cherish that little more.

“I knew I had to be happy throughout the entire pregnancy for her, there was no point putting myself or her through that when we had such limited time together.

“It was amazing feeling her kick, I didn’t know if she would move around at all but we found out, as she moved a lot.

“As we got further along into the pregnancy she moved more and more, I could watch her little feet move across my belly.

“I had nine months to carry her and fall in love but it was nothing compared to holding her and seeing her, I couldn’t see anything wrong with her when she was born, I was in love." 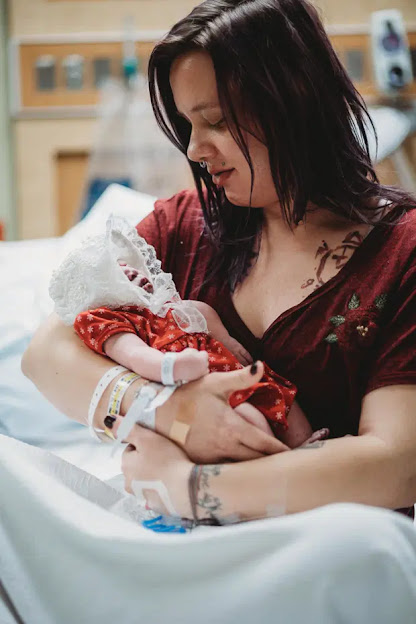 She miraculously survived for a week before passing away on New Year's Eve in the arms of her parents.

Her short life has allowed two other babies a chance at life, after her heart valves were donated and her lungs were given to a research foundation in desperate need of organs.

“After she passed, the surgeon came in and told he us he had not met a family like us in 12 years," said Krysta.

“It felt wonderful knowing that because of her two other kids get to go home, that touched us the most.

“Every time I look at the reminders of her, I treasure the moments, I still get a couple of tears coming down they are perfect moments.

“As hard as it is to give away those organs as it is your child, it makes a huge difference to others’ lives who wouldn’t have a second chance.”

Krysta tragically miscarried in September 2017 due to her polycystic ovary syndrome.

The couple believes that they made the right decision in carrying Rylei to term so that they could donate her organs.

Krysta said: “We were told there was a good chance she may not make it out alive on her own and if she did she may not survive the cord being cutting as she was living off me.

“It really stemmed from the love we have for her, no matter what the outcome we would carry her to term.”

During the delivery, another complication arose with Rylei emerging facing the wrong way.

Her favourite images showcase the raw emotion when a tearful Krysta sees Rylei for the first time and then the last time the nurse checked her heart rate before putting a monitor on her.

Additionally, photographer Autumn Cleek filmed some of Rylei’s final moments to help immortalise the couple's time with their daughter.

Clarissa who offers this service to parents saying goodbye, free of charge, said: “I’m a mother myself so to experience that hit me on a deeper level, it could happen to anybody and the thought of that is heartbreaking.

“I treated her how I would want to be treated in that situation when Rylei was born I fell in love too, it was emotional, I fell in love with them all.

“Rylei was absolutely beautiful, she had her brain exposed but Krysta didn’t see disability or her conditions, she saw her daughter and the pure love shone from her.