She knew they would only have a few fleeting months together, but in that time Sarah’s unborn daughter would transform her understanding of beauty, worth, and the gift of life.

Happily married and teaching history at the University of Oxford, Sarah Williams had credentials, success, and knowledge. It took someone who would never have any of these things to teach her what it means to be human.

This extraordinary true story begins with the welcome news of a new member of the Williams family. Sarah’s husband, Paul, and their two young daughters share her excitement. But the happiness is short-lived, as a hospital scan reveals a lethal skeletal dysplasia. Birth will be fatal.

Sarah and Paul decide to carry the baby to term, a decision that shocks medical staff and Sarah’s professional colleagues. Sarah and Paul find themselves having to defend their child’s dignity and worth against incomprehension and at times open hostility. They name their daughter, Cerian, Welsh for “loved one.” Sarah writes, “Cerian is not a strong religious principle or a rule that compels me to make hard and fast ethical decisions. She is a beautiful person who is teaching me to love the vulnerable, treasure the unlovely, and face fear with dignity and hope.”

In this candid and vulnerable account, Sarah brings the reader along with her on the journey towards Cerian's birthday and her deathday. It’s rare enough to find a writer who can share such a heart-stretching personal experience without sounding sappy, but here is one who at the same time has the ability to articulate the broader cultural issues raised by Cerian’s story. In a society striving for perfection, where worth is earned, identity is constructed, children are a choice, normal is beautiful, and deformity is repulsive, Cerian’s short life raises vital questions about what we value and where we are headed as a culture.

Sara Williams and her husband, Paul, have learned how to trust God by walking through the fires of suffering.

A routine 20-week pregnancy scan revealed a problem. Sarah’s baby had a lethal skeletal issue called thanatophoric dysplasia, a malformity of the skeletal structure where the bones don’t develop sufficiently to allow the proper development of the lungs. The baby was safe inside the womb but would die at birth or shortly thereafter.

Sarah remembers the shock of hearing that the best medical recommendation for her situation was to terminate the life of her baby. Her first instinct was to view this as solely a medical situation that demanded solely a medical response. Why go through the suffering of giving birth to a child that has no chance for survival?

She now considers that response a defense mechanism against her own fear and uncertainty.

Then an extraordinary thing happened to Sarah and Paul later that night, after their terrible diagnosis.

“As we prayed together, God spoke to us. We had no idea until that night what people experienced when they say that. I can only describe it as a deep sense that God was sitting on that sofa with us in our despair. He was saying, ‘Here is a sick and dying child. Will you love her for me and take care of her until she dies?’ That changed everything for us because suddenly our circumstances weren’t so much about our capacity to deal with this terrible situation, but about God’s love for this tiny, vulnerable baby that the hospital didn’t even think of as a human being.”

It’s a hard truth: God doesn’t always rescue us from our grief and pain. But He does always meet us in it.

Sarah and Paul faced great opposition from colleagues, friends, and doctors. Yet, during labor, Sarah felt God’s presence as never before, and knew He had come to take their baby (named Cerian, Welsh for loved one) home.

Thanatophoric dysplasia (TD) is the most common form of skeletal dysplasia known to be lethal in the neonatal period. The term thanatophoric derives from the Greek word thanatophorus, which means "death bringing" or "death bearing." Salient phenotypic features of TD include macrocephaly, narrow bell-shaped thorax with shortened ribs, normal trunk length, and severe shortening of the limbs. See the image below.

TD is divided into 2 clinically defined subtypes: TD type I (TD-I or TD-1) and TD type II (TD-II or TD-2). The clinical subtypes of TD are defined by either a curved or straight appearance of the long bones. TD-I, the more common subtype, is characterized by a normal-shaped skull and curved long bones (shaped like old-fashioned telephone receivers); the femurs are most affected in TD-I. TD-II is associated with a cloverleaf-shaped skull and straight femurs. However, reported cases have cited clinical overlap between these subtypes.

Both TD-I and TD-II are part of a group of skeletal disorders associated with mutations within the Fibroblast Growth Factor Receptor 3 gene (FGFR3). TD-I and TD-II are due to an autosomal dominant point mutation, with the gene responsible, FGFR3, being mapped to the short arm of chromosome 4 (4p16.3). Penetrance of this mutation is 100%. Currently, all cases of TD are due to de novo mutations in FGFR3. Germline mosaicism has not been clearly documented but remains a theoretical possibility... 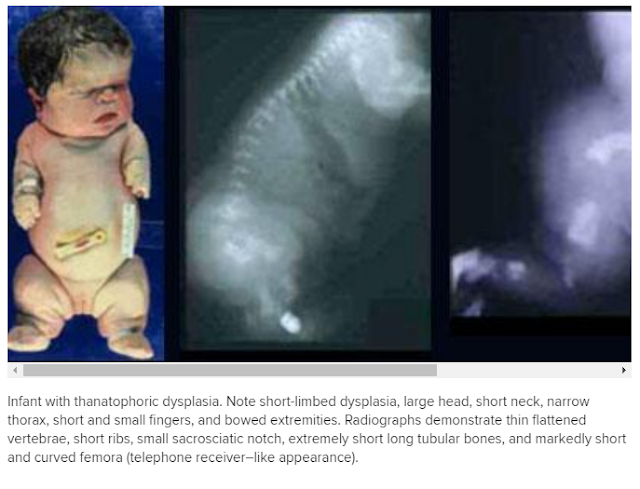 Newborns with TD are stillborn or die shortly after birth. Death occurs usually within 48 hours and is due to severe respiratory insufficiency from a reduced thoracic capacity and hypoplastic lungs and/or respiratory failure due to brainstem compression. Survival into early childhood has been rarely reported.

Males and females are equally affected.

TD is lethal in neonates. Although extremely rare, survival beyond the neonatal period has been described in the medical literature.

Posted by Galen Breningstall, MD at 10:26 AM