Children’s vocabulary skills are linked to their economic backgrounds. By 3 years of age, there is a 30 million word gap between children from the wealthiest and poorest families. A recent study shows that the vocabulary gap is evident in toddlers. By 18 months, children in different socio-economic groups display dramatic differences in their vocabularies. By 2 years, the disparity in vocabulary development has grown significantly.

The study, conducted by researchers at Stanford University, tested the language processing of 18- and 24-month-old toddlers using pictures, instructions, and eye response. Each toddler sat in her caregiver’s lap as images of two familiar objects were shown on a screen. (The caregiver wore sunglasses so the child could not be influenced by the caregiver’s responses to the questions or images.) A recorded voice identified one of the objects by name and used it in a sentence (Look at the doggy). The researchers filmed the child’s eye movements, tracking which picture the child looked at (vocabulary) and how long this took in milliseconds (processing time). (Watch a two-minute video of the study at www.youtube.com/watch?v=I7HN5LJOc-w&feature=youtu.be.)

Children from higher economic backgrounds looked at the identified object faster and spent more time looking at the correct image. At 24 months, children from the lower economic group were performing at the same level as the 18-month-olds from the high economic group in both speed and accuracy. The study also focused on the way children process new vocabulary. Here, too, young children from homes with low incomes lag behind children of the same age who are growing up in more affluent circumstances.

This new information connects to what researchers discovered earlier. The landmark Hart and Risley study in 1995 identified “remarkable differences” in the early vocabulary experiences of young children. Researcher and author Betty Hart described the results of their observations: “Simply in words heard, the average child on welfare was having half as much experience per hour (616 words per hour) as the average working-class child (1,251 words per hour) and less than one-third that of the average child in a professional family (2,153 words per hour). This is important because vocabulary development during the preschool years is related to later reading skills and school success in general. 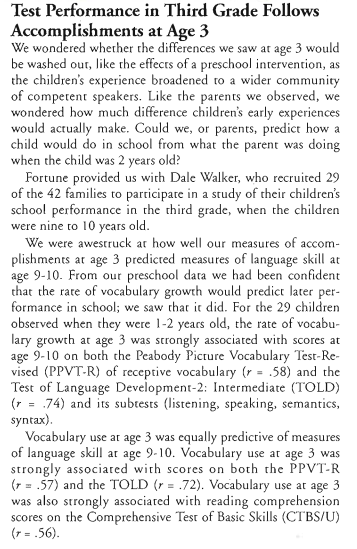 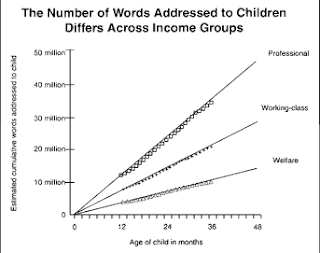 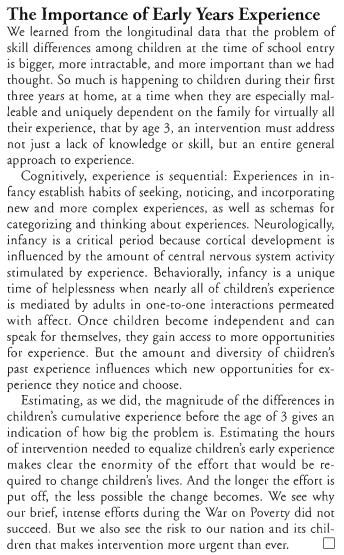 At the University of Kansas in the mid-1990s, child psychologists Betty Hart and Todd Risley discovered that the amount of language a child heard spoken in the home was tightly correlated with socioeconomic status. Tina Rosenberg summarized some of their seminal findings in a New York Times’ “Fixes” column earlier this year:

The disparity was staggering. Children whose families were on welfare heard about 600 words per hour. Working-class children heard 1,200 words per hour, and children from professional families heard 2,100 words. By age 3, a poor child would have heard 30 million fewer words in his home environment than a child from a professional family. And the disparity mattered: the greater the number of words children heard from their parents or caregivers before they were 3, the higher their IQ and the better they did in school. TV talk not only didn’t help, it was detrimental.

And as the Stanford study suggests, language disparities are taking root well before the age of 3. Left unaddressed, those gaps could have life-changing consequences. Citing earlier research on the early childhood language gaps, Fernald and her co-authors write: “Such a large disparity cannot simply be dismissed as a transitory delay, given that differences among children in trajectories of language growth established by 3 years of age tend to persist and are predictive of later school success or failure.”