A key mechanism that causes ALS

Israeli researchers announced on Tuesday that they uncovered a key mechanism that causes the neurodegenerative disease ALS, in a study published in the journal Nature Communications.

This breakthrough could unlock a way to delay or reverse the condition which affects hundreds of thousands of people worldwide, The Times of Israel (ToI) reported.

The team consisted of researchers from Tel Aviv University and Sheba Medical Center in central Israel, as well as from institutes in Germany, France, Britain and the United States.

They found that a buildup of a protein called TDP-43 near neuromuscular junctions — which translates neural signals into motor activity — causes neurons to degenerate and die.

As a result, this leads to amyotrophic lateral sclerosis (ALS), also known as Lou Gehrig’s Disease, which causes the loss of the ability to walk, talk, or even breathe.

“The paralysis caused by the disease results from damage to the motor neurons, which leads to the degeneration of nerve endings and to the loss of muscle innervation,” said Prof. Eran Perlson, ToI reported.

“Until now, we could not understand the basic biological mechanism causing the initial damage behind this vicious cascade,” he added.

The scientists were able to restore motor neuron activity using an experimental molecule to break down TDP-43 in animals, according to ToI.

Perlson explained that the discovery could “lead to the development of new therapies… and thereby heal the nerve cells before the irreversible damage that occurs in the spinal cord.”

Researchers at Tel Aviv University's Schools of Medicine and Neuroscience uncovered, for the first time, the biological mechanism causing nerve destruction in the most common type of neurodegenerative disease, Amyotrophic lateral sclerosis (ALS).

The novel study, which was published in Nature Communication journal, indicates that the course of this fatal disease, also known as Lou Gehrig's disease, can be delayed and even reversed in its early stages.

One out of every 400 people will be diagnosed with ALS and given a life expectancy of about three years. Over those years, ALS patients will lose ability to control muscle movement, leading to paralysis. Currently, there is no cure.

Prof. Eran Perlson, who led the study with assistance from TAU doctoral students and Sheba Medical Center, noted that it remains unclear what causes the debilitating illness.

An illustration showing the TDP-43 protein destructively accumulating in motor nerve extensions, specifically in the neuromuscular junctions of ALS patients, where it traps messenger RNA molecules and prevents the synthesis of proteins essential to mitochondrial function. TEL AVIV UNIVERSITY

"Only about 10% of the patients carry a familial background with known genetic mutations, but the remaining 90% are a mystery. The paralysis caused by the disease results from damage to the motor neurons, which leads to the degeneration of nerve endings and to the loss of muscle innervation. This consequently leads to the degeneration of the nerve and the death of motor neurons in the spinal cord, however until now we could not understand the basic biological mechanism causing the initial damage behind this vicious cascade," he said.

To address the mystery, the researchers analyzed a protein called TDP-43, which had been shown in earlier studies to accumulate in unusual amounts and localization in the brains of about 95% of all ALS patients.

The team revealed a novel biological link between the protein's accumulation and the degeneration of the synapses between the motor neuron endings and the muscles, called neuromuscular junctions, which translate neural commands into physical movements. In muscle biopsies taken from ALS patients the researchers found that the toxic protein accumulates also in high proximity to these neuromuscular junctions during the early stages of the disease and before patients develop any serious symptoms. In a series of experiments performed by the researchers, both in cells of ALS patients and in genetically modified model animals, they discovered that the accumulation of the TDP-43 protein in the neuromuscular junction inhibits the ability to locally synthesize proteins that are essential to mitochondrial activity, which provides the power of fundamental cellular processes. The dysfunction of mitochondria in nerve terminals leads to neuromuscular junction disruption and ultimately to the death of the motor neurons. "It’s important first to understand the spatial complexity of motor neurons," Perlson said.

"The motor neurons are found in the spinal cord and need to reach every muscle in the body in order to operate it. One can imagine, for example, an extension cable coming out of the spinal cord and reaching the muscles in the little toe in our foot. These extensions can be as long as one meter in adults and are called axons. In earlier studies, we have shown that to maintain this complex organization motor neuron axons require an increased amount of energy, particularly in the most remote parts, the neuromuscular junctions. In our current study, we focused on a pathological change in TDP-43 protein that takes place in these axons and at neuromuscular junctions. In a normal motor neuron, this protein is mainly found in the nucleus. We showed that in ALS this protein exits the nucleus and accumulates throughout the entire cell and particularly in the neuromuscular junction. As the function of motor neurons depends on these neuromuscular junctions located on the remote end of the 'extension cable', we realized that this finding could be of critical importance. We discovered that the accumulations formed by the TDP-43 protein in neuromuscular junctions trap RNA molecules and prevent the synthesis of essential proteins to mitochondrial function. Mitochondria are organelles found in cells and are the main energy providers for numerous cellular processes, including neural transmission. The condensation of TDP-43 protein in neuromuscular junctions results in a severe energy depletion, prevents mitochondrial repair, and consequently leads to the disruption of these junctions, degeneration of the entire ‘extension cable’ and to the death of motor neurons in the spinal cord," he continued.

Perlson concluded that in the future if doctors could diagnose and intervene early enough, maybe it will be possible to inhibit the destructive degeneration in ALS patients' muscles.

Mislocalization of the predominantly nuclear RNA/DNA binding protein, TDP-43, occurs in motor neurons of ~95% of amyotrophic lateral sclerosis (ALS) patients, but the contribution of axonal TDP-43 to this neurodegenerative disease is unclear. Here, we show TDP-43 accumulation in intra-muscular nerves from ALS patients and in axons of human iPSC-derived motor neurons of ALS patient, as well as in motor neurons and neuromuscular junctions (NMJs) of a TDP-43 mislocalization mouse model. In axons, TDP-43 is hyper-phosphorylated and promotes G3BP1-positive ribonucleoprotein (RNP) condensate assembly, consequently inhibiting local protein synthesis in distal axons and NMJs. Specifically, the axonal and synaptic levels of nuclear-encoded mitochondrial proteins are reduced. Clearance of axonal TDP-43 or dissociation of G3BP1 condensates restored local translation and resolved TDP-43-derived toxicity in both axons and NMJs. These findings support an axonal gain of function of TDP-43 in ALS, which can be targeted for therapeutic development. 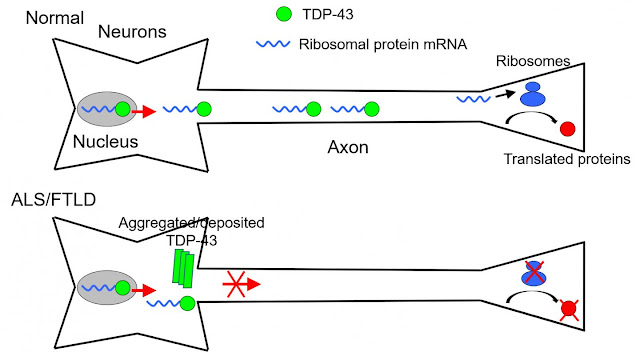 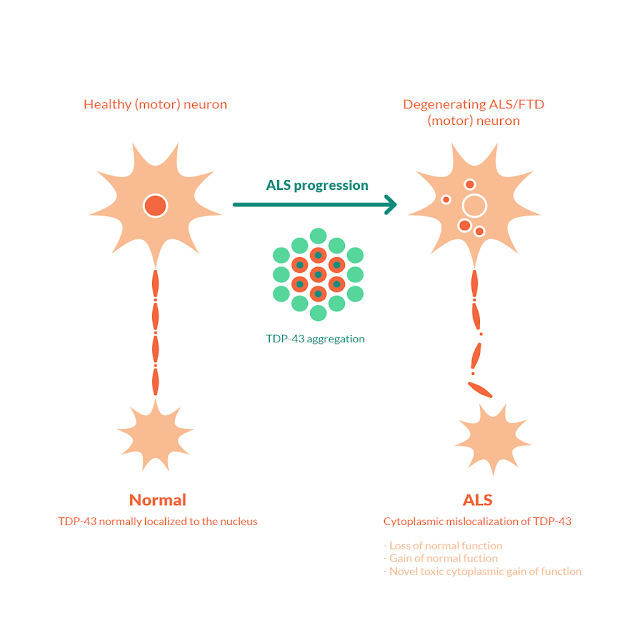