Riley and Harrison have a rare, terminal disease called Infantile Neuroaxonal Dystrophy (INAD). They were born after easy pregnancies, no complications and no indication that anything was wrong. Riley was born in 2013 and was meeting her milestones (talking and starting to walk) but at 13 months, Riley started to lose the abilities she had gained. She started falling over a lot, having trouble holding her head up, swallowing and many other seemingly simple tasks. Then Harrison was born in July 2015 (right before Riley turned 2), also without complications. But in 2016, Riley was diagnosed with INAD after losing her ability to walk, talk, or crawl. Because INAD is genetic, Harrison was tested and had just turned 1 when we got his diagnosis, and he wasn't even showing symptoms yet. It was the worst day ever - finding out that the 2 youngest children had INAD.
Now, in 2021, both children are bed-bound, can't move, fragile and floppy as newborns, on feeding tubes, cannot talk and rely on parents or nursing staff to take care of all their basic human needs. Despite these circumstances, the children are extremely well-cared for and happy. The family is mostly in good spirits. Whitney and Jason are great parents, the nurses are wonderful people, Natalie and grandparents help out, and the community has rallied around this family - for which Jason & Whitney are extremely grateful.
Riley is almost 8 (her birthday is Halloween) and Harrison is 6. They both weigh over 50 pounds (25kg) and it is getting harder to carry them to bed at night and into the living room in the morning, to get them into the bathroom for showers and its harder to get them up the steep ramp & into the van for trips and doctor appointments. Although there life expectancy is 8-12 years of age, we still need to make modifications to our home and vehicle in order to make them more comfortable and to make caring for them easier and safer.
The Frosts need your help to raise enough money to:
put a track system in the house
modify the van with a wheelchair lift and change the seating for Natalie & nursing staff
pay bills (Whitney's parents are paying her mortgage)
The Frost Family would also like to collect money to be able to help other families. Whitney has helped other families in the past and would like to continue to do that.
Thank you for helping whether its by donating, sharing their story or following along. Thank you so much for being here.
https://www.gofundme.com/f/frostarmy 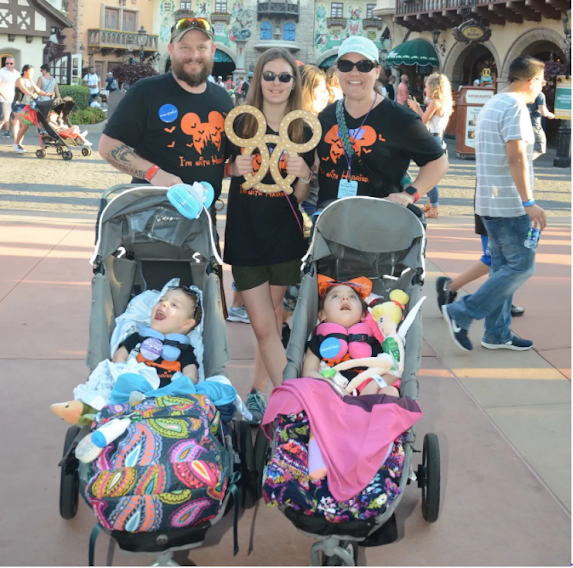 Slightly homicidal and obsessed with crime shows, Riley is a handful. She vocalizes when she's happy and heavy sighs when she isn't. She loves chaos and going out whenever she can. Her hair and nails always look amazing thanks to her nurse.

Harrison is the sweetest boy you'll ever meet. He's head over heels in love with his nurse and his favorite place is his bed. He doesn't like leaving the house but enjoys fart noises and cuddles. He is the most laid back kid in the world.

By the time Harrison was almost a year old, Riley and Harrison had been diagnosed with a very rare terminal disease called infantile Neuroaxonal dystrophy. Because of this they both received Make-A-Wish trips and both chose Disney, Riley going at Christmas in 2017 and Harrison going in Halloween of 2018.

Whitney Frost has always done her best to remain strong for her kids, but it certainly hasn't been easy. Two of her three children have been living with a rare genetic disorder known as infantile neuroaxonal dystrophy, or INAD, which she regularly chronicles on TikTok, where she's amassed more than 1.7 million followers. But Whitney has shared an unexpected and tragic update: her son Harrison quietly died at the age of 6 on New Year's Day...

According to a GoFundMe page recently set up for the family, Riley was the first to be diagnosed with INAD in 2016 after losing the ability to walk, talk, or even crawl. Though Harrison was two years behind her and not showing any symptoms at the time, doctors encouraged Whitney and her husband to have him tested, since the condition is genetic.

Sadly, Harrison was also diagnosed with INAD just shortly after his first birthday.

"It was the worst day ever — finding out that the two youngest children had INAD," the GoFundMe page explains.

In time, Whitney's reality as a mother of three would change dramatically. In addition to raising her now 17-year-old daughter Natalie (who does not have INAD), she suddenly became a special needs mom responsible for the increasing demands of her youngest children's care.

Still, the most heartbreaking part about INAD is what it does to a person's life expectancy.

In fact, most patients don't get to live past the age 12 — and that's if they're lucky.

In Harrison's case, he died at home before he could even live to see his seventh birthday.

In a TikTok shared on Saturday, Whitney revealed that her boy was surrounded by family when he died, and assured her followers that he "went quickly" and "did not suffer."

"We are devastated," Whitney admitted in the video captions. "But glad he's no longer in pain."

According to People, his mom had previously shared a positive update about his health status, reporting that he was doing well despite his recent setback. But on Saturday, it appears that the 6-year-old's health took a turn for the worse.

Over the past few days, hundreds of comments have flooded the grieving mom's post.

“From all of us … I think it’s safe to say we are collectively crying with you," wrote one TikToker. "Never doubt what a wonderful life you gave him. It was full of love."

“I am so sorry," added another. "I’m a silent viewer, but my heart is with you in these heavy times. No words can life the burden.

“I’m picturing Harrison running and playing in Heaven," said someone else. "No more pain and sickness.”

“Be free, Harrison!" wrote yet another follower.

Before her son's death, Whitney checked in to thank everyone for their love and support.

But sadly, she had some more upsetting news to share: Riley isn't doing well now, either.

Struggling through tears, Whitney explained that her 8-year-old is currently suffering from a gastrointestinal bleed, a fever, and other complications tied to her illness, and that at the moment, things don't look good.

"Her stomach contents are almost black, so that's something that we're worried about," the mother said. "She also has crackling sounds in her lungs so she's had to sleep on her side all day so that she can breathe better."

Whitney has continued to update her followers, who are constantly checking in to make sure she's doing OK.

In one update, she said that friends and family have come over to help watch Riley in the wake of Harrison's death, so the exhausted mother can get some much-needed rest. She also shared that Riley seems to be doing "OK" though her health still seems touch-and-go.

The rest of the family, however, is struggling.

“I don’t know what to say … We’re not doing OK, we’re just coping," said Whitney. "And we’re not all coping in a very healthy way right now, which is fine."

As for Harrison, Whitney says she expects his funeral to take place on January 15. She also shared that the family donated his brain to a research hospital in hopes that it will help doctors better understand the debilitating genetic disorder.

In the meantime, friends, family, and followers are continuing to leave messages of encouragement on her page, and donate to the Frost family's GoFundMe campaign, which has raised more than $25,000 toward their $50,000 goal.