A father is celebrating a milestone that doctors said his son would never live to see with a six-week birthday celebration.

Dallan Cloward will turn 30 in August. When he was born, doctors told his parents he wouldn't live past 2 years old.

"I still so remember thinking, 'I can't get too attached because it will hurt more when we lose him,'" Dallan Cloward's father, Chad Cloward, told KPNX. "Then after a day or two of thinking that -- it hit me -- that if I don't give him every ounce of love I can, I will regret that for my entire life once he passes."

Dallan Cloward was small and had a cleft lip and cleft palate when he was born in 1986. His parents later learned he had been born with Wolf-Hirschhorn syndrome, a rare developmental disorder that causes delayed growth.

Dallan Cloward weighed 4 pounds when his family took him home "wearing the only thing that fit, a Cabbage Patch doll outfit," according to the Beehive.

Doctors told the Clowards that Dallan Cloward would basically "have no learning ability and would be in a vegetable state," Chad Cloward said.

But Dallan Cloward defied expectations. He sat up at 16 months and started crawling at 2 1/2 years old. He earned the nickname "The Battler" as he dealt with sudden seizures, frequent doctor visits and a regimen of medications, the Beehive reported.

He went to school. He started walking at 15 years old. And in 2008, when he was 21 years old, he graduated from high school, according to the Beehive. 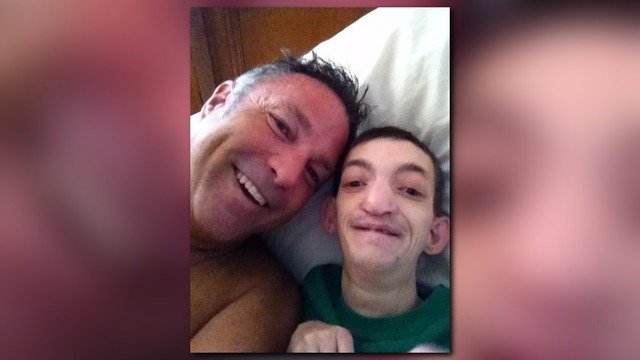 Chad Cloward told KPNX he plans to celebrate the achievement with a six-week celebration of his son's birthday.

"He never thinks of the past and doesn't worry about tomorrow, he enjoys the moment," Chad Cloward told the news station.

http://www.fox25boston.com/news/trending-now/father-celebrates-sons-birthday-30-years-after-doctors-said-he-would-only-live-to-2/381424072
Courtesy of my daughter

When Dallan was three and a half, Chad and Corina’s second child, Mikenna, was born. Shortly after, Dallan suffered a major setback, going “from an improving four-year-old, 20-pound child to a disappearing 10-pound child in just six months,” Chad says. “He lost his ability to crawl, sit up and for another unknown reason lost all his hair.”

Dallan had a wonderful teacher in Joe Zimmerman at Franklin Elementary, where he also found a friend, Nikki, who had the same rare disease as Dallan.

Others played important roles in Dallan’s life, and, in return, “Dallan has touched many lives,” Chad says.

Dallan moved on to Stapley Junior High School, where his teacher was Jennifer Alig. In February 2002, at age 15, Dallan walked for the first time.

When Dallan transferred to Dobson High School, Jen Alig went with him.

“She has truly been a Godsend for us and for Dallan,” Chad says. When Jen called to say Dallan would be graduating, Chad says, “Even though I knew this was his last year, it tugged at my heart.”

Dallan’s milestone caused Chad to reflect on his own life. “I can always look to Dallan for inspiration. Even though he can’t speak he touches more lives than great orators, he never goes out of his way to have anybody notice him; people are simply drawn to him,” Chad says.