Zeesy Bruk, all of 5, is no stranger to overcoming challenges. Her parents, Rabbi Chaim and Chavie Bruk are co-directors of Chabad-Lubavitch of Montana in the city of Bozeman (population about 42,000), which serves one of the smallest and most isolated Jewish populations in the United States.

In fact, her father says that it’s their family’s faith and inspiration that helped them reach their most recent milestone: her appointment as Montana’s 2016 Children’s Miracle Network Hospitals Champion Child. This coming year, Zeesy and her family will serve as local, state and national spokespeople advocating for charitable needs at children’s hospitals throughout America. 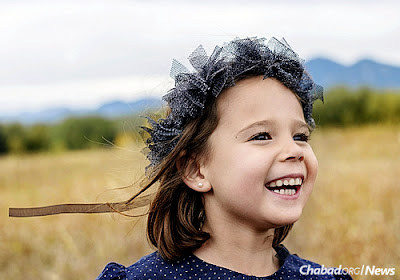 “Zeesy was named the ‘2016 Champion Child’ for the state due to her courageous battle with a rare genetic metabolic disorder characterized by deficiency of a protein required for glucose to cross the blood-brain barrier,” read a statement from Shodair Children’s Hospital in Helena, Mont., the only Children’s Miracle Hospital in the state. “This disease can sometimes be misdiagnosed as epilepsy, which is what Zeesy was initially diagnosed with due to her frequent seizures. However, her parents continued to look for answers as Zeesy continued to experience tantrums and developmental regressions.”

Living far from large hospitals—children do not come to Shodair for medical treatment, but for genetic counseling—the Bruks determinedly took their daughter to see specialists in Utah, Colorado and New Jersey in their quest for answers. The challenge was compounded by the fact that Zeesy, like her siblings, was adopted as an infant, so the Bruks were short on details about her genetic history.

Eventually, it was determined that Zeesy had GLUT-1 Deficiency, a disorder so rare that she is the only person known to have it in the entire state of Montana.

Working with experts at Shodair, the Bruks put Zeesy on a glucose-free diet. As one of the few families who keep kosher in Montana, the Bruks were no strangers to special diets, so they took cutting out glucose in stride. Seven months later, they report seeing developmental increases, and are looking forward to more positive progress in the coming months and years.

“There is no doubt that our family was greatly buoyed by our faith in G‑d and the inspiration we gain from the teachings of the Rebbe [Rabbi Menachem M. Schneerson, of righteous memory], whose vision prompted us to make Montana our home nearly a decade ago,” says Rabbi Bruk. “The fact that Zeesy will now be traveling and inspiring others is the natural outgrowth of how we live our lives.”For its part, the hospital notes that she “continues to have a carefree attitude and doesn’t let this diagnosis get in the way of her living and loving her life.”

As Dr. Abe Elias, director of medical genetics at Shodair, puts it: “Zeesy’s spunk and tenacity will serve her as she learns, with the help of her parents, how to navigate and manage this genetic disorder, and live life to the fullest.”

During her time as a Champion Child, the 5-year-old will serve as ambassador for the Treasure State, bringing awareness to the various medical challenges facing many young people today. Along those lines, she will unite later this year with Champion Children from each state; they will visit Washington, D.C, and Orlando, Fla., as part of an official Ambassador Tour to highlight the vital work of children’s hospitals nationwide.

Zeesy’s first appearance is scheduled to take place on Monday, March 14, at the Children’s Miracle Network Spring Kickoff Luncheon in her hometown of Bozeman.