A currently 12 1/2  year old boy was found to have hydrocephalus on prenatal imaging.  He was born at 38 weeks gestation, weighing  5790 g (12.7 lbs).   The birth head circumference was 57 cm. A ventriculoperitoneal shunt was placed.  A brain biopsy showed gliovascular tissue with focal dense astrogliosis and fragments of grey matter with marked vascular congestion.  There was no definite evidence of neoplasm.His subsequent history has been one of developmental delay and cognitive compromise, intractable epilepsy and motor impairment.  He has a vagal nerve stimulator.  He receives antiseizure pharmacotherapy with felbamate and lacosamide. A recent electroencephalogram showed essentially continuous paroxysmal/electrographic ictal appearing discharges that waxed and waned with altering morphologies, amplitudes and frequencies over the left hemisphere. In addition, subclinical ictal appearing discharges were present in the right hemisphere. Clinical seizure could not be correlated with such observations. For behavioral and sleep issues he receives risperidone and clonidine.  He can ambulate independently, but uses a wheelchair for community ambulation. On the K-BIT2 his IQ composite was 40, verbal 43 and nonverbal 40. 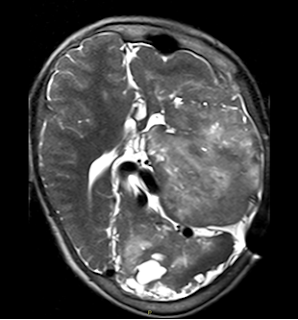 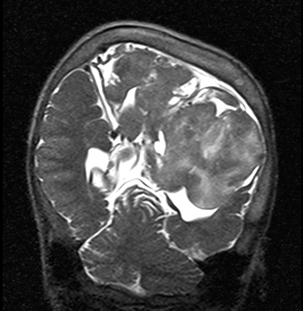 T2 images There is a masslike region throughout nearly the entire left cerebral hemisphere with areas of cystic change posteriorly. Numerous cystic structures with failure of CSF suppression (suggesting complexity) were present. 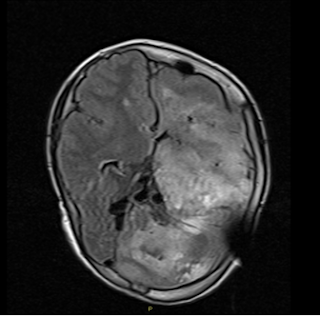 FLAIR image  A large dysplastic, mass like, FLAIR hyperintense region is present in the left frontal, parietal, and occipital region.
Posted by Galen Breningstall, MD at 9:39 AM