Objective: To report the distinctive clinical features of cryptogenic new-onset refractory status epilepticus (C-NORSE) and the C-NORSE score based on initial clinical assessments.

Methods: A retrospective study was conducted for 136 patients with clinically suspected autoimmune encephalitis who underwent testing for autoantibodies to neuronal surface antigens between January 1, 2007, and August 31, 2016. Eleven patients with C-NORSE were identified. Their clinical features were compared with those of 32 patients with anti-NMDA receptor encephalitis (NMDARE).

Results: The clinical outcome of 11 patients (median age, 27 years; 7 [64%] women) with C-NORSE was evaluated after a median follow-up of 11 months (range, 6–111 months). Status epilepticus was frequently preceded by fever (10/11 [91%]). Brain MRIs showed symmetric T2/fluid-attenuated inversion recovery hyperintensities (8/11 [73%]) and brain atrophy (9/11 [82%]). Only 2 of the 10 treated patients responded to the first-line immunotherapy, and 4 of the 5 patients treated with IV cyclophosphamide responded to the therapy. The long-term outcome was poor in 8 patients (73%). Compared with 32 patients with NMDARE (median age, 27 years; 24 [75%] women), those with C-NORSE had more frequent prodromal fever, status epilepticus, ventilatory support, and symmetric brain MRI abnormalities, had less frequent involuntary movements, absent psychobehavioral symptoms, CSF oligoclonal bands, or tumor association, and had a worse outcome. The C-NORSE score was higher in patients with C-NORSE than those with NMDARE.

Since the discovery of autoimmune encephalitis (AE) and autoantibodies against neuronal cell-surface antigens or synaptic proteins (NSA antibodies), a few cases of FIRES15 or NORSE16 associated with NSA antibodies have been documented. Furthermore, a recent large cohort demonstrated that a half of 130 patients with NORSE remained cryptogenic, but 37% were immune mediated; among those, the most common etiology was anti-NMDA receptor (NMDAR) encephalitis (NMDARE).

Therapeutic approach with IV cyclophosphamide (IVCPA) has also been proposed in even cryptogenic cases. However, only 1 of 63 patients (2%) with cryptogenic NORSE (C-NORSE) received IVCPA in the cohort. In an emergency condition, antibody testing results may not be readily accessible, but it is important to differentiate C-NORSE from antibody-mediated encephalitis at an early stage…

The first-line immunotherapies are usually not effective in patients with NORSE,3 FIRES,5 or AERRPS.6 Lack of response is consistent with the absence of NSA antibodies; however, inflammation-mediated epileptogenesis has increasingly been proposed. One study showed upregulation of interleukin (IL)-6, C-X-C motif chemokine 10, and IL-8 in CSF of patients with AERRPS, suggesting a role for the innate and adaptive immune system,35 since IL-6 is a booster of adaptive immune mechanisms while IL-8 and CXC-10 enhance the innate immunity; IVCPA exerts its main activity rather on the T-cells than on the B-cells. Although we did not examine CSF cytokine or chemokine levels in our cases, IVCPA might have some beneficial effects on inflammation-mediated mechanisms.

In practice, physicians must judge whether their patients with NORSE are cryptogenic or immune mediated based on initial clinical assessments because antibody testing results are usually not readily accessible. Therefore, we listed 8 distinctive features in table 2 and created the C-NORSE score. When the patient has 5 or more of the first 6 clinical features without etiology readily identified, NSA antibodies would be less likely detected, and conventional AED treatments would not be expected to provide remarkable beneficial effects. In our cases, all had 5 or more C-NORSE scores. This scoring strategy may help physicians to identify cryptogenic cases, but this scoring system should be validated in the different cohort in the future. 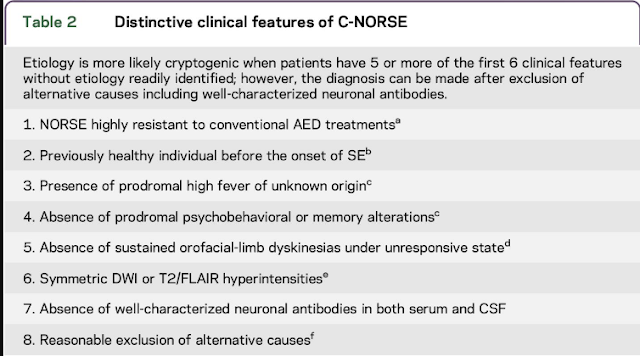 It is known that 80% of patients with NMDARE achieve a good outcome at 24 months.36 Such a good outcome and lack of evident brain damage on MRI are strongly related to early and intensive immunotherapy, and the absence of a substantial infiltration of the brain with inflammatory cells and the lack of complement activation may protect the brain from massive structural damage.37 However, epilepsy-related irreversible brain damage occurs quickly in C-NORSE; therefore, it may require more aggressive and early initiation of immunotherapy such as IVCPA than antibody-mediated encephalitis…

Many issues remain unknown, including etiology, epileptogenesis, and response to immunotherapy in C-NORSE. Genetic analysis was not performed in our patients. One might argue that these patients may include those with seronegative autoimmune limbic encephalitis or genetic epileptic disorder underdiagnosed or with some new antibodies not detected yet. We cannot rule out such possibilities. It remains to be determined whether early administration of IVCPA and IVMP or IVIg with conventional AED treatment would improve long-term outcomes. These issues should be addressed in the future.