Stephen Hawking, one of the greatest scientists of the modern age, died this week at 76. The pioneering astrophysicist spent his life changing the way we think about the universe, but some people say his obituaries show how much work remains in changing how we think about people with disabilities.

Social media users decried some coverage of Hawking's death as "ableist," a term to describe discrimination or prejudice against people who are disabled. Hawking, who was diagnosed with amyotrophic lateral sclerosis (ALS) when he was 21, used a wheelchair and communicated through a computerized voice system. While the media described his remarkable scientific achievements, many also fixated on his ALS, something advocates say perpetuates stereotypes about people living with disabilities…

"There are people who think he's a hero because he lived with this degenerative motor neuron disability. Well, no. The alternative to that was dying," said Colleen Kelly Starkloff, co-founder of the Starkloff Disability Institute, which works to change attitudes about people with disabilities. Starkloff and her late husband Max Starkloff, who was disabled, met Hawking at a White House reception in 1998. "He wanted to live. He wanted to make a contribution. He was a curious man, and he did a great deal to help us think differently about the universe. ... His pictures will draw attention to his disability. What should be focused on primarily was that this man was a genius and that he advanced physics in a way that most people have not." 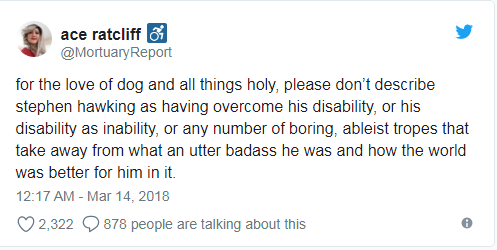 Many stories about Hawking's death used phrases such as "overcame his disability," or "in spite of his disability," which Starkloff said have negative connotations. As one Twitter user wrote, "We really need to stop referring to disability and success/achievement as if they're somehow diametrically opposed."…

Hawking's accomplishments were extraordinary for anyone, able-bodied or not, and yet in a headline recapping his life Buzzfeed wrote "Stephen Hawking, Astrophysicist With A Paralyzing Disease, Dies At 76."

From the Washington Post's obit: "Stephen W. Hawking, the British theoretical physicist who overcame a devastating neurological disease to probe the greatest mysteries of the cosmos and become a globally celebrated symbol of the power of the human mind, died March 14 at his home in Cambridge, England."

From CNN's obit: "Stephen Hawking, the brilliant British theoretical physicist who overcame a debilitating disease to publish wildly popular books probing the mysteries of the universe, has died, according to a family spokesman."

From USA TODAY's obit, which has since been corrected: "Despite his physical ailments, he was known for a direct and dry wit, often combining the marvelous and mundane in his observations."

"What did he overcome? His disability didn't go away," Starkloff said. "I think the writers are trying to say that this man was a very accomplished man, but they don't have to put it in the sense that he overcame this devastating neurological disease. He dealt with his disability — that's what we say. You deal with it. You manage your disability. You accept it for part of who you are. And you live your life as fully and productively as you want to."

Hawking said his disability may have even aided him in his work.

"My disabilities have not been a significant handicap in my field, which is theoretical physics," Hawking wrote in a 1984 article for Science Digest. "Indeed, they have helped me in a way by shielding me from lecturing and administrative work that I would otherwise have been involved in."…

She suggests journalists use "simple language" when writing about people with disabilities and pay attention to subtleties. There's a big difference between saying "Hawking became disabled at the age of 21" and saying "Hawking suffered from a  degenerative disease since he was 21."

Say a person has a disability, not that they're crippled, handicapped or a victim.

When talking about people who don't have a disability, don't refer to them as "normal." Instead, use "able-bodied."

Hawking said multiple times that his life was full. He fell in love, had three children and spent his career looking for answers to some of the universe's most fundamental questions.

"I accept that there are some things I can't do," he told the Associated Press in 1997. "But they are mostly things I don't particularly want to do anyway. I seem to manage to do anything that I really want."