A little boy born with no eyes and a gap in his face is bravely raising awareness of what it's like to live with facial differences.

Christian Buchanan, six, was born with a condition called Tessier cleft lip and palate - so rare there are only thought to be 60 cases documented in medical history.

The condition is caused by the facial tissues not joining properly during a baby's development.

It can leave sufferers with severe facial disfigurement, unable to eat, speak and see.

Christian's mum, Lacey, from Woodbury, Tennessee, said as a result of her son's condition he's never been able to see.

"His condition was caused by amniotic banding syndrome," she said.

"Fibrous bands can form in the womb and if they attach to the baby they cut off blood flow, so Christian's banding happened to attach to his face."

When Christian was born, he was unable to eat due to the large gaps on his face where the cleft palate was and has used a feeding tube since he was four days old.

Despite learning and speech difficulties, Christian's condition hasn't stopped him from living a full life.

Lacey explained, “Christian is a very typical six-year-old little boy. He's learning to read, he likes to wrestle with his little brother - all the things that any six-year-old would enjoy.

“The biggest way Christian’s condition affects his daily life is his vision impairment."

“Because he is completely blind, he has to learn to navigate the world in the dark.

"Our world is made for sighted people and he has to learn to live in it without the benefit of sight and so we have to do things a little differently sometimes but its totally doable and he is doing it.”

The six-year-old has so far had seven operations, three to reconstruct his face and close the gaps that the cleft created.

And mom Lacey said he is set to have more surgery, with the hope that one day he will be able to speak and eat properly.

While she hoped to bring her son up in a world that understands different conditions, Lacey said she's been shocked by people's reactions to Christian.

“I was unaware before Christian was born that there is this huge social stigma about being different, looking different, and most people didn’t know how to handle somebody with that type of difference," Lacey said.

“Just recently we had an issue, we were in a store and Christian was playing with a little toy in the shelf and a lady walked by and said, ‘eww'."

Lacey said Christian has heard people making comments, hearing kids say things like "why does he look like that?" and "what's wrong with his eyes?".

She said she always answers back in a very positive, upbeat tone, telling people it's just how he was born.

When kids ask why he has red eyes, Lacey tells them, "That's just how he was made, he has got red eyes, you know, it's cool." 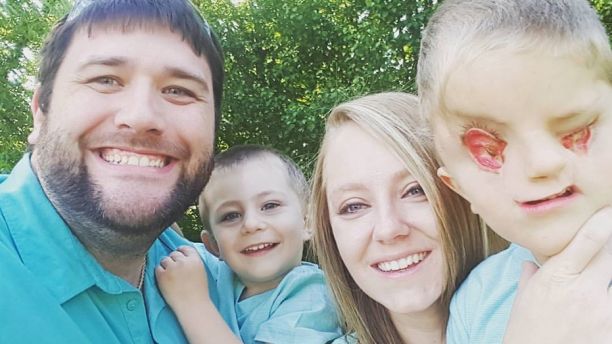 And she said her son has learned to tell people "that's just how God made me."

As well as being a keen violinist, Christian is currently working towards an orange belt in karate.

Lacey said, “I would definitely describe Christian as independent.

"I remember a few years ago he started saying, ‘I want to do it all by myself mummy'.

“He’s curious and he wants to explore the world and he’s not afraid to do it.”

Despite how brave her son is and how far he has come, Lacey said she can't help but worry about his future.

That's why she's determined to raise awareness of disabilities, to help make the world a better place for her son, and many others like him.

She added, "I want to share my family’s story to raise awareness for disabilities in general and specifically facial differences.

"And I hope that I’m fostering an atmosphere of acceptance and understanding and respect for differences so that the world will just be a better place for Christian one day.”