Introduction
An increased number of newborns with microcephaly were noted in late 2015 in the Northeast of Brazil during the ongoing Zika virus (ZIKV) outbreak.  Because Brazil has a high number of cases with central nervous system abnormalities related to ZIKV congenital infection, we assessed the perinatal case fatality rate (PCFR) in congenital Zika syndrome (CZS) from April 2015 to April 24, 2017, in the State of Rio Grande do Norte (RGN), a Brazilian Northeast State highly impacted by ZIKV outbreak and endemic for arboviruses. RGN has a population of 3,400,000 inhabitants. Such data will help inform public health policies to measure the impact of ZIKV on human health and to control Aedes aegypti mosquito populations.

Study design
We obtained the data through the epidemiologic bulletin from the RGN Department of Health on microcephaly and other congenital abnormalities from April 2015 to April 29, 2017. We selected variables from the bulletin that provided descriptive epidemiologic information for our study and allowed the calculation of the PCFR.

Measurements and definitions
i. Perinatal period commences at 22 completed weeks (154 days) of gestation and ends seven completed days after birth.
ii. PCFR is defined as the number of deaths as a fraction of the number of sick persons with a specific disease (×100).

Results
There were 486 cases of microcephaly and other congenital abnormalities notified in RGN, of which 144 were confirmed and 106 remain under investigation. The remaining 238 cases have been ruled out by presenting normal examinations or by presenting microcephaly by noninfectious causes. Of the total confirmed cases, 26.7% (38/142) died after birth or during pregnancy. A total of 4.2% of confirmed deaths, (6/144) × 100% = 4.2%, were related to ZIKV infection during pregnancy. The six cases were confirmed by reverse transcription-polymerase chain reaction or IgM and IgG antibodies against ZIKV. The remaining cases of deaths remain under investigation. An increased prevalence of microcephaly and other congenital abnormalities ( Fig ) was observed, especially after September 2015, with the highest rate in November 2015 (22.3 cases per 1000 live births). Before this ZIKV outbreak, the rate in RGN between 2010 and 2014 was approximately 1.8 cases/year. 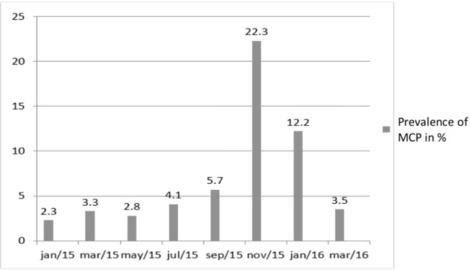 Prevalence of microcephaly (MCP) in Rio Grande do Norte State.

Discussion
We found a high PCFR (4.2%) in CZS. Because CZS could only be confirmed by reverse transcription-polymerase chain reaction or IgM and IgG antibodies against ZIKV, we did not include 15 cases with suggestive brain computed tomography scan abnormalities to calculate the case fatality rate. Thus, our results might represent an underestimation of the true burden. In another study with 602 cases of CZS, which included only live-born infants, the mortality rate ranged from 4% to 6%.  Different from our research, which focused on case fatality rate, this cited study calculated the mortality rate (number of deaths as a fraction of the number of deaths in the general population). Additional studies should be performed in other areas of Brazil's Northeast region endemic for arboviruses to assess the PCFR among CZS cases. Limitations include the fact that despite the growing number of cases of CZS, local health-care providers are still facing difficulties to measure the true incidence and prevalence of CZS in the RGN. This limitation might be related to the under-reporting of cases, the lack of resources for diagnostic tests (laboratory and imaging), and poor clinical research infrastructure development.

Conclusion
Because RGN is endemic for arboviruses, the ZIKV outbreak is likely to increase the infant mortality rate in future years. A longer follow-up time will provide unprecedented data regarding chronic neurological complications.