Claudia Martinez, 28, is a walking miracle. She's also a fourth-year medical student at the same hospital that has treated her throughout six brain surgeries.

The Brawley, Calif., native who was raised in Houston, Texas wanted to be a doctor since she was a little girl but she never could have imagined the journey it would take her on, which she now describes as  "a blessing in disguise."

Martinez received a devastating diagnosis as an undergraduate student at the University of Houston. Plagued by headaches and blackouts, Martinez was told her debilitating condition was called Chiari Malformation, which involves brain tissue extending into the spinal cord. It could cause paralysis. But despite the diagnosis, surgeries, and going in and out of hospitals, Martinez graduated with a 4.0 and got accepted into her dream medical school, the University of Texas at Houston, where she was being treated.

"My journey has been long and at times has felt impossible, but what keeps me going is my future patients," Martinez told Fox News. "I've learned we don't necessarily need a cure. We need inclusion, we need patience, we need accessibility, and we need individuals who are willing to work with us to give us the reasonable accommodations that, by law, we are entitled to."

Martinez suffered a seizure during her first year of medical school and had to undergo experimental surgery. During her third year, she suffered a stroke that left her unable to function from the neck down. She was transferred to TIRR Memorial Hermann Hospital for intense neuro-rehabilitation where she learned to walk, feed, dress, and bathe once again.

Martinez has organized the Conquer Chiari 5k Walk three times, raising over $55,000 for Chiari research, and plans to hold the fourth walk this year.

"Yes, I'm here to advocate for myself, but more importantly for those who do not yet have a voice, for those coming after me, and for my future patients," she added. "If I can set a trail to guide others so they don't have to suffer as much as I have, then it will all be worth it."

Martinez has shared her journey on Instagram, inspiring others through her honesty and fight. 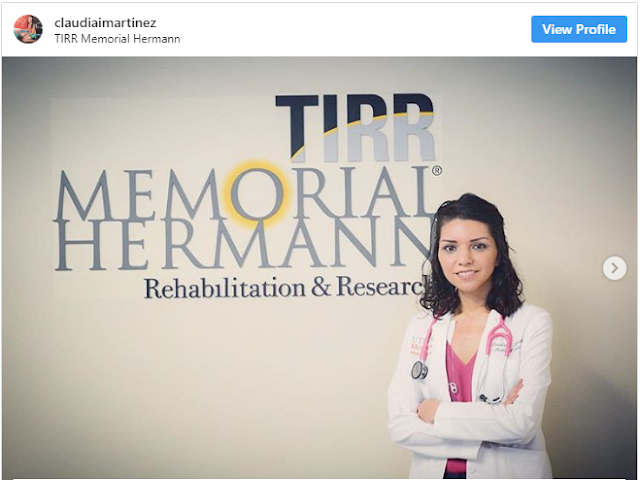 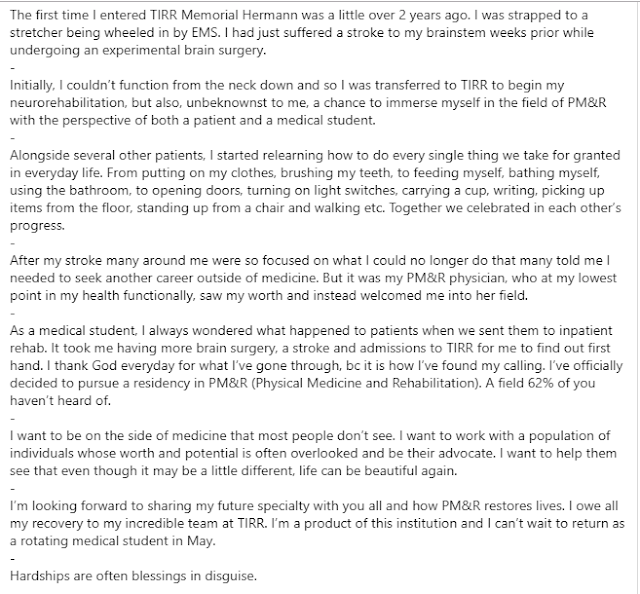 "I thank God every day for what I’ve gone through, [because] it is how I’ve found my calling," Martinez wrote on her Instagram. "I’ve officially decided to pursue a residency in PM&R (Physical Medicine and Rehabilitation)."

She added: "I want to be on the side of medicine that most people don’t see. I want to work with a population of individuals whose worth and potential is often overlooked and be their advocate. I want to help them see that even though it may be a little different, life can be beautiful again."
But Martinez doesn't use med school or being a patient as an excuse.

She also mentors college students, especially underrepresented minorities who are interested in pursuing medicine, through programs like Aspirations in Medical Professions, SMDEP Mentorship Program, Pre-Jamp symposium, and on her own.

The 28-year-old volunteers with RSVP (Rehabilitation Services Volunteer Project), a non-profit that provides physical rehabilitation services and medical equipment to underinsured individuals in Houston with disabilities.

And if that isn't enough, Martinez is in the process of starting her own non-profit that will work to give patients adaptive medical equipment and make adjustments to their home to make them ADA compatible.

Posted by Galen Breningstall, MD at 10:30 AM