A 52‐year‐old woman with previous diagnosis of CP and developmental delay, early‐onset epilepsy (generalized tonic‐clonic seizures and complex partial seizures), and episodic migraine without aura was referred to our Movement Disorders Clinic because of episodes of abnormal gait. Since childhood, she presented paroxysms of painful and disabling dystonic gait that were triggered by 10‐ to 20‐minute walks, with a frequency of four to five episodes per month. Dystonic position of the legs was mainly in adduction, flexion, and equinovarus. Symmetry, intensity, and latency were variable. These episodes improved after a few minutes of rest. They were unrelated with fasting or postpandrial state and unresponsive to levodopa (video at article).

Head circumference was normal. EEG recorded during an episode of dystonia was normal. Cranial MRI and CT scan findings were consistent with bilateral putaminal iron deposition. A lumbar puncture showed hypoglycorrhachia (34 mg/dL) with a blood glucose level of 90 mg/dL and a CSF/blood glucose ratio of 0.37. Heterozygous pathogenic p.Arg126Cys mutation in SLC2A1 gene was disclosed... 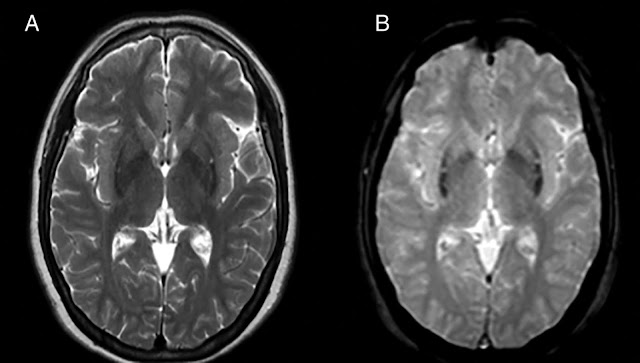 After 6 months on strict ketogenic diet (KD), no further disabling episodes of PEID occurred, and migraine and seizures were controlled. Moreover, symptoms recurred transiently after a short period of incomplete adherence to KD.

Most SLC2A1 mutations are de novo. No phenotype‐genotype correlations have been clearly established, although some types of mutations have been related to specific clinical manifestations.2 Patients who carried the mutation of our patient (pArg126Cys) had been previously reported3-5 and presented symptoms that included intellectual impairment, different types of seizures, spastic paraplegia, paroxysmal choreoathetosis, PEID, gait ataxia, dysarthria, and microcephaly with a variable age at diagnosis.

The clinical spectrum of the disease is wide, and, as this case report illustrates, the delay on diagnosis is sometimes considerable. In patients with a chronic neurological disorder, paroxysmal manifestations such as PEID are an important clue to the diagnosis of GLUT1‐DS. Recognition of this syndrome is of critical importance given that treatment with KD may improve seizure control and movement disorders. Although degree of response clearly depends on the delay of diagnosis and severity of the manifestations, we have shown that this treatment could be worth trying in adult patients with long‐lasting disease when motor manifestations are disabling.

Posted by Galen Breningstall, MD at 8:19 AM