The sydrome of the trephined

An 18-year-old male, nursing home resident, presented to the hospital with labored breathing and acute respiratory failure. The patient at baseline was nonverbal with a Glasgow coma scale (GCS) of 10/15. Approximately a year prior to presentation, the patient had suffered from traumatic brain injury after a fall. He underwent large left-sided craniectomy with a bone flap and placement of VP shunt at an outside hospital at the time. At initial presentation to our hospital, the patient was started on broad-spectrum intravenous antibiotics to cover for pneumonia. On day 3, the patient was noted to have sinus bradycardia with heart rate in the 40 s and low blood pressure at 90/60. On examination, the patient had a GCS of 8/15 with unequal pupils. Emergent CT head revealed sinking skin flap syndrome with paradoxical brain herniation and 19.9 mm midline shift (Figure 1). The patient was placed in Trendelenburg position and transferred to the intensive care unit for close monitoring. An urgent neurosurgery consult was also obtained, and cranioplasty was advised but the family deferred. The patient’s VP shunt was adjusted to increase the intracranial pressure. A repeat CT scan after 5 days revealed stable midline shift with no interval changes and improvement in mental status (Figure 2). 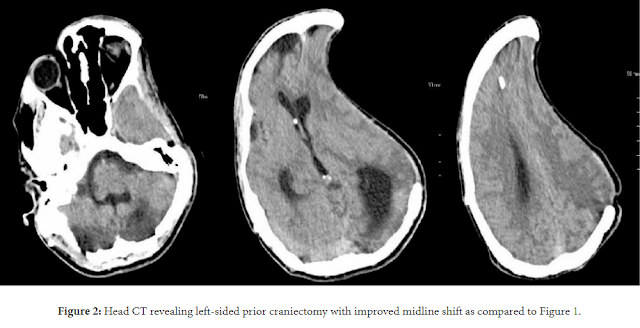 The syndrome of trephined is an uncommon postoperative complication that usually occurs after months of surgery in patients who undergo large craniectomy for various reasons like traumatic brain injury, malignant middle cerebral artery infarction, contusions, and subdural hematomas. The first case of sinking skin flap syndrome was reported by Yamamura et al. back in 1977. After that, sinking skin flap syndrome has been reported fairly in the literature. In a study of 108 patients performed back in 2008 who underwent decompressive crainectomy, syndrome of trephined was reported in 13% of patients between 28 and 188 days after the surgery.

Patients often present with symptoms of neurologic deterioration including new onset headache, dizziness, mood changes, fatigability, or seizures. Some patients present with delayed dysautonomic symptoms like postural hypotension and urinary and bowel dysfunction. Physical examination often reveals a large skull defect with an overlying depressed skin flap. The ubiquitous CT findings include paradoxical herniation, sunken skin flap sign, and deviation of the midline structures. The CT head without contrast of our patient revealed small slit-like ventricles and left-sided craniectomy defect with a sunken brain/skin flap. In addition, it was noted that the adjacent brain had an outwardly concave appearance with an associated midline shift to the right by 19.9 mm (Figure 1).

The pathophysiology of this syndrome is not clear. Some authors suggest that large craniectomies convert the cranium from a closed box to an open cavity which alters the brain pathophysiology. The atmospheric pressure and gravity overwhelms the intracranial pressure which leads to paradoxical herniation and sunken skin flap syndrome. Langfitt TW theorized that atmospheric pressure is directly transmitted to the intracranial cavity, which increases inward shifting of the scalp over the surgery site.

The treatment options in this catastrophic syndrome are limited and not clearly defined. The primary goal of treatment in syndrome of trephined is the restoration of external pressure that is exerted by the depression of the craniectomy site. The data supporting conservative management in patients with neurological deterioration are lacking. However, trendelenberg position largely reverses the paradoxical herniation in this syndrome. In some cases, intrathecal saline infusion was found to be effective in reversing the impending herniation.

Abstract
BACKGROUND:
Syndrome of the trephined is a unique neurosurgical condition that is seen in patients that have undergone craniectomy. While the symptoms of the condition range from mild to severe, the only definitive treatment for the condition is replacement of the bone flap. This article presents a novel, temporary treatment for syndrome of the trephined in a patient with severe symptoms who was unable to undergo immediate cranioplasty due to infection.

CASE DESCRIPTION:
A 25-year-old gentleman with a history of trauma resulting in hydrocephalus, craniectomy, and eventually ventriculoperitoneal shunt placement presented with a cranial wound infection requiring removal of his bone flap. While being treated with antibiotics, with his bone flap removed, he developed severe syndrome of the trephined. An emergency bedside procedure was developed and executed to treat his condition.

CONCLUSIONS:
Treating syndrome of the trephined with an external suction device proved useful and lifesaving fort the patient presented. Such a device can be made with common supplies found within any hospital. The technique used to treat the patient is novel and may be useful for others to consider if ever faced with a similar situation.
Posted by Galen Breningstall, MD at 4:26 PM