A Texas mom praised a United Airlines crew and passengers who accommodated her four-year-old son with autism who did not want to sit still on their flight home from a family vacation.

Lori Gabriel, of Cypress, who was about half an hour from Houston, told Fox News on Tuesday that on August 6 she was on a flight from San Diego to George Bush Intercontinental Airport in Houston with her son, Braysen, who usually loves to fly, when he “had a meltdown.”

“It was time for takeoff and Braysen had slipped out of his seatbelt and he wanted to sit on the floor. So, we were trying to get him back into his chair and get his seatbelt back on, and that’s when he had his meltdown and started kicking, screaming and hitting,” Gabriel told Fox News.

She said as she was trying to get him back in the chair, a flight attendant came over and told her the flight couldn’t take off until he was seated.

“I said, ‘I am sorry.’ I told her he’s autistic,” Gabriel said, adding that she was worried they were going to get kicked off the flight “since he wouldn’t sit down and I would have understood that because it’s a safety issue.”

Gabriel said the flight attendant was “so nice” and let her hold Braysen on her lap for takeoff. She said after the seatbelt sign had been turned off, “I just couldn’t hold him anymore because he was fighting me the entire time and that’s when he sat on the floor.”

Gabriel said a passenger sitting across from them, a United flight attendant who was not working during the flight, was being nice and said it was not a problem when he was kicking her feet as he was on the ground. 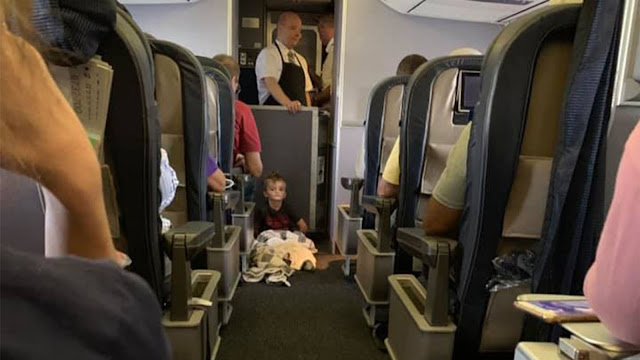 Gabriel said her son then made his way up to first-class and was “messing” with a man’s seat. Gabriel said the man told her not to worry about it and that he didn’t mind, even introducing himself to Braysen and giving him high-fives.

Gabriel, who shared what had happened on her Facebook page, said instead of handling the situation in a negative manner, members of the flight crew chose to accommodate her son’s needs.
She added they allowed Braysen to sit wherever he wanted.

“Huge thank you to United Airlines they accommodated his needs, made sure we were all OK, worked around where he choose to sit,” Gabriel wrote on Facebook after she had landed in Texas, adding that the flight attendants “couldn’t have done a better job.”

United Airlines responded to Gabriel’s shoutout on social media, “It sure sounds like Braysen and your family had a great flight. We are happy that our crew was able to make it an enjoyable experience. We are overjoyed to see that we have such loving and supportive passengers on board as well!”

“To the man in first-class seat 6C, you rock. Thanks for playing with Braysen and not minding him kicking your seat or messing with you! He loved your high fives!” Gabriel wrote in the Facebook post.

Gabriel told Fox News that at the end of the flight, the flight attendant who was sitting across from them gave her a hug and a handwritten note, writing that she commended Gabriel for her strength and said her family was “loved and supported.”

The woman wrote that she commended Gabriel for her strength and said her family was “loved and supported.”

“Do not ever let anyone make you feel as though you are an inconvenience or a burden. He is a blessing,” the woman wrote. “God bless your patience, your love, your support and your strength. Continue to be a super woman.”

In response, Gabriel posted a picture of the note on her Facebook page and wrote, “To the lady that wrote me this note in seat 7D thank you, you may not know how much that means to us when we feel defeated. Thank you for helping and being kind.”

Gabriel told Fox News that the woman “in seat 7D,” now identified as Camille Vaughn, saw the Facebook post and commented on it on Tuesday, writing, “Blessed to see this. Blessed to have met your family and made a difference. Thank you for sharing and I hope to one day see you again #Superwoman.”

“She made me speechless when she found me,” Gabriel told Fox News.

Gabriel said Braysen has been on flights to Kentucky and back before the San Diego flights and said there were no issues. She noted those flights were not as long as the trip back from San Diego, which was three and a half hours long versus two.

“I just never had so many strangers be so kind,” Gabriel told Fox News on Tuesday.

“It shows me that there are still good people in the world. It shows me that me and my family can go on vacations, we can go where all other families go. We can go anywhere, theme parks, we can do anything anyone else can because there are people who are caring and understanding.”