A number of nurses (36 to be exact) at Children’s Mercy Hospital in Kansas City, Mo., are expecting or have recently given birth. So far, 21 nurses who work in the hospital’s Level IV NICU —  the highest level of neonatal intensive care available, and the only Level IV NICU in the region, according to a hospital spokesperson — have delivered their babies. To date, 19 boys and two girls have arrived. 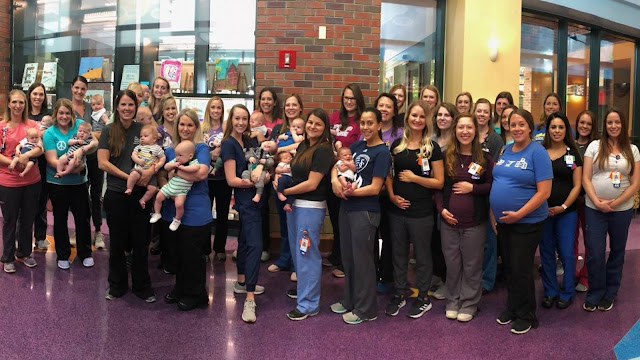 "I think being a mom has given me a whole new perspective and now when I take care of a baby, I really do — I know what that mom and dad feel like and this baby is their whole world," Sarah Carbaneau, a NICU nurse, told CBS News.aomen “are excited for each other” and noted being surrounded by so many other expecting moms has served as a support system.

"We can chat about it and vent about it and be excited for each other. Especially those of us who already have kids. Many of us give each other opinions on things. We have a Facebook group and we weigh in on everything from diaper rash to kids crawling out of their crib,” Janes, who is due at the end of November, said.

“It's a great support and there's always a mass of toddlers running around. And they're all getting to recognize each other, and that's fun,” she added.

A similar event happened at a Maine hospital earlier this year, albeit with fewer people: Nine nurses working for the Maine Medical Center’s labor and delivery unit were said to be expecting babies between April and July.

Nine nurses working for the Maine Medical Center's labor and delivery unit are reportedly expecting babies between April and July. 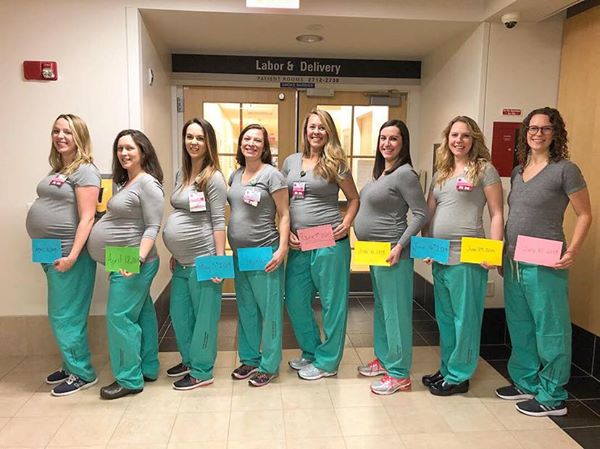 The women said they’re glad to be able to experience their pregnancies together.

"After each one of us started to say, 'We're pregnant,' I think it was a happier announcement each time, and we're all there for each other," nurse Erin Grenier told WMTV.

Another nurse commented on the great support system she has at work.

“It’s really nice coming to work and seeing other people who are just as pregnant and watching their bellies pop and just talking about these experiences that we are going through together,” nurse Amanda Spear said.

The nurses vowed to support each other from the beginning until the end of each of their pregnancies and plan to be present for the delivery of each baby.