The symptomatic presentation of cerebral schistosomiasis is uncommon. The case of a 25-year-old woman from Equatorial Guinea with headache and seizures secondary to cerebral neuroschistosomiasis, as confirmed by histopathological examination and microbiological study, is presented. A review of the literature on this subject is also provided.

We present the case of a 25-year-old woman from Equatorial Guinea. Her personal history was relevant, with a typhoid fever episode in 2001 and two episodes of paludism, the most recent in 2002. In March 2006 she presented with holocranial headache, hyperesthaesia in her right hemibody and clonic seizures that started in the right hemibody, secondarily generalised. There was no sign of fever or constitutional syndrome. Brain CT showed space-occupying lesions in the left cerebral hemisphere, and electroencephalogram (EEG) indicated epileptiform activity of the Grand Mal type. Treatment with methylprednisolone and phenobarbital was prescribed, and the patient became seizure free. The patient was referred to our hospital for evaluation in July 2006…

The patient was treated with phenytoin and dexamethasone from admission onward, with a subsequent reduction of brain oedema, allowing for a lumbar puncture with the following cerebrospinal fluid (CSF) test results: 5 leukocytes/mm3, 0 red blood cells (RBCs)/mm3, glucose 64 mg/dl, total proteins 0.28 g/litre and intrathecal synthesis of IgG. CSF microbiology tests were all negative. Empiric treatment was started with albendazole 400 mg every 12 h for 14 days, followed by praziquantel 60 mg/kg/day in two daily doses for 2 days. The steroid dose was progressively reduced after treatment, but 1 month later the patient again presented with seizures; an MRI showed a new lesion in the left parasagital parietal region. An open brain biopsy of this new lesion was carried out, revealing a whitish and opaque thickened meninges coating an avascular nodular white elastic tissue replacing the cerebral cortex. Histology revealed multiple epithelioid granulomas formed around parasite ova. Some of the eggs had an ovoid shape and were limited by a periodic acid-Schiff (PAS)-positive membrane, a feature that permitted identification as Schistosoma ova. In conjunction with the ova, giant multinucleated cells and a surrounding lymphocytic inflammatory infiltrate were also observed. Several completely fibrosed granulomas were also identified (fig ).

Direct microscopic examination was performed on fresh brain tissue, revealing Schistosoma spp. eggs. Treatment was initiated with oral praziquantel 60 mg/kg/day in two daily doses for 3 days, and completed with oral corticoid treatment in a slowly decreasing dose for an additional month. The patient became asymptomatic. At 14 months later she is free of symptoms and repeated MRI shows residual lesions. 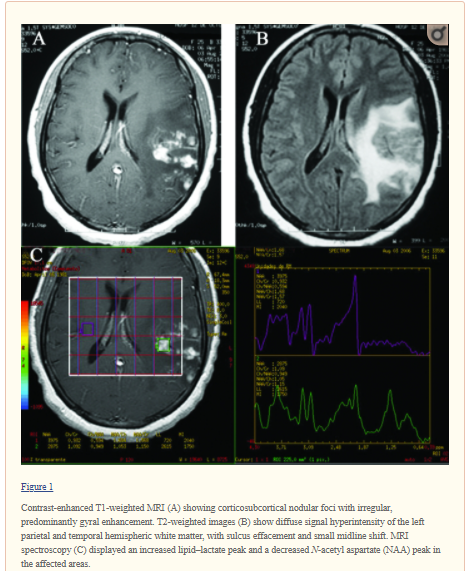 Objective: The purpose of our study was to describe the characteristic MRI appearance of cerebral infection with Schistosoma japonicum.

Conclusion: Cerebral infection with S. japonicum can cause a characteristic MRI pattern of a large mass comprising multiple intensely enhancing nodules, sometimes with areas of linear enhancement. The typical appearance may be useful for diagnosis in endemic regions and may potentially be useful in cases imported into countries in which the disease is not endemic. 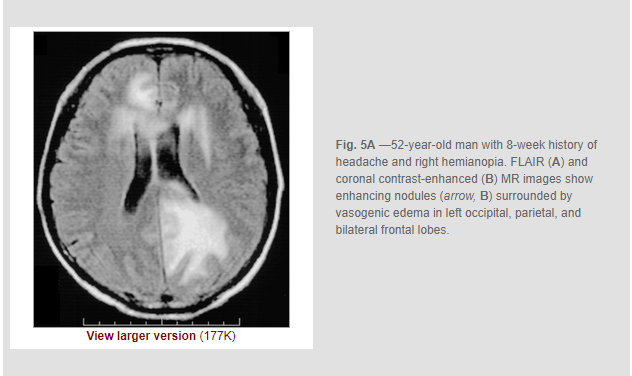 Posted by Galen Breningstall, MD at 10:32 AM