Dick Hoyt, who inspired thousands of runners, fathers and disabled athletes by pushing his son, Rick, in a wheelchair in dozens of Boston Marathons and hundreds of other races, has died, a member of the family said Wednesday.

Dick passed away quietly in his sleep at his Holland, Massachusetts, home on Wednesday morning, Russ Hoyt, another of his sons, told The Associated Press.

"He had an ongoing heart condition that he had been struggling with for years and it just got the better of him," Russ Hoyt said.

Russ and his other brother, Rob, broke the news to Rick.

Dick Hoyt first pushed his son, who is quadriplegic and has cerebral palsy, in the Boston Marathon in 1980. Dick and Rick, in a specialized wheelchair, completed 32 Boston Marathons together, until Dick, citing health issues, retired in 2014. He had planned on retiring after the 2013 race, but the father and son never finished because of that year's finish line bombing, so they came back one more time.

The Boston Athletic Association, which runs the marathon, called Hoyt a legend.

"The B.A.A. is tremendously saddened to learn of the passing of Boston Marathon icon Dick Hoyt," the organization said in a statement. "Dick personified what it meant to a be a Boston Marathoner, showing determination, passion, and love every Patriots Day for more than three decades. He was not only a fan favorite who inspired thousands, but also a loyal friend and father who took pride in spending quality time with his son Rick while running from Hopkinton to Boston."

Dick served as Grand Marshal of the 2015 race in recognition of his accomplishments. 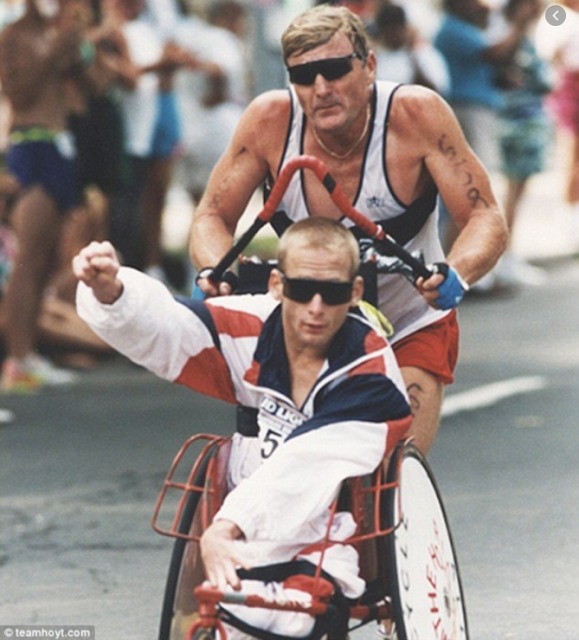 And even though his father stopped, Rick did not. Bryan Lyons, a dentist, took over pushing Rick starting in 2015 until his unexpected death last June at age 50.

The 1980 Boston Marathon was not the Hoyts' first road race.

In 1977, Rick told his father that he wanted to participate in a benefit run for a lacrosse player who had been paralyzed. They finished next to last, but that was just the start.

"Dad, when I’m running, it feels like I’m not disabled," Rick told his father after that first race, according to the website of Team Hoyt, the charity the family established to help disabled athletes.

They participated in more than 1,000 races, including duathlons and triathlons and in 1992 even completed a run and bike across the U.S., covering 3,735 miles (6,010 kilometers) in 45 days, according to the website.

In 2013, a statue of father and son was erected in front of a school in Hopkinton, near the Boston Marathon's starting line.

Rick was born in 1962 to Dick and Judy Hoyt. As a result of oxygen deprivation to Rick’s brain at the time of his birth, Rick was diagnosed as a spastic quadriplegic with cerebral palsy. Dick and Judy were advised to institutionalize Rick because there was no chance of him recovering, and little hope for Rick to live a “normal” life. This was just the beginning of Dick and Judy’s quest for Rick’s inclusion in community, sports, education and one day, the workplace.

Dick and Judy soon realized that though Rick couldn’t walk or speak; he was quite astute and his eyes would follow them around the room. They fought to integrate Rick into the public school system, pushing administrators to see beyond Rick’s physical limitations. Dick and Judy would take Rick sledding and swimming, and even taught him the alphabet and basic words, like any other child. After providing concrete evidence of Rick’s intellect and ability to learn like everyone else, Dick and Judy needed to find a way to help Rick communicate for himself.

With $5,000 in 1972 and a skilled group of engineers at Tufts University, an interactive computer was built for Rick. This computer consisted of a cursor being used to highlight every letter of the alphabet. Once the letter Rick wanted was highlighted, he was able to select it by just a simple tap with his head against a head piece attached to his wheelchair. When the computer was originally first brought home, Rick surprised everyone with his first words. Instead of saying, “Hi, Mom,” or “Hi, Dad,” Rick’s first “spoken” words were: “Go, Bruins!” The Boston Bruins were in the Stanley Cup finals that season. It was clear from that moment on, that Rick loved sports and followed the game just like anyone else.

In 1975, at the age of 13, Rick was finally admitted into public school. After high school, Rick attended Boston University, and he graduated with a degree in Special Education in 1993. Dick retired in 1995 as a Lt. Colonel from the Air National Guard, after serving his country for 37 years.

The Beginning of Team Hoyt

In the spring of 1977, Rick told his father that he wanted to participate in a 5-mile benefit run for a Lacrosse player who had been paralyzed in an accident. Far from being a long-distance runner, Dick agreed to push Rick in his wheelchair and they finished all 5 miles, coming in next to last. That night, Rick told his father, “Dad, when I’m running, it feels like I’m not handicapped.”

This realization was just the beginning of what would become over 1,000 races completed, including marathons, duathlons and triathlons (6 of them being Ironman competitions). Also adding to their list of achievements, Dick and Rick biked and ran across the U.S. in 1992, completing a full 3,735 miles in 45 days.

In a triathlon, Dick will pull Rick in a boat with a bungee cord attached to a vest around his waist and to the front of the boat for the swimming stage. For the biking stage, Rick will ride a special two-seater bicycle, and then Dick will push Rick in his custom made running chair (for the running stage).

Rick was once asked, if he could give his father one thing, what would it be? Rick responded, “The thing I’d most like is for my dad to sit in the chair and I would push him for once.”

The 2009 Boston Marathon was officially Team Hoyt’s 1000th race. Rick always says if it comes down to doing one race a year he would like it to be the Boston Marathon: his favorite race.

2013 was going to be Dick and Rick's last Boston Marathon together, but they were not able to finish due to the bombings. They vowed to be back in 2014 to finish "Boston Strong" with all the other runners, which they did; stopping many times along the 26.2 distance to take photos and shake hands of the many well wishers, and finishing with several of the runners from their Hoyt Foundation Boston Marathon team.

Dick and Rick will continue to do shorter distances races. Neither Dick or Rick are ready to retire yet.

Posted by Galen Breningstall, MD at 10:11 AM