New-onset refractory status epilepticus (NORSE) is a syndrome of prolonged seizures that typically develops in otherwise healthy, young individuals without a history of epilepsy or obvious initial cause. The term was first coined in a case series of 7 young women with prior good health who developed refractory status epilepticus (RSE) with an extensive, negative diagnostic work-up and poor outcome. While the incidence of RSE is estimated between 9–43% of all episodes of SE, no such data exists for NORSE. Patients with NORSE experience prolonged lengths of stay in the hospital/intensive care unit (ICU) and myriad complications with poor short and long-term outcomes. In one study, the average duration of NORSE was 36 days, and the average length of stay in the ICU was 33.5 days. The costs of NORSE are substantial both in terms of functional outcome and healthcare dollars.

The etiology of NORSE is often presumed to be due to viral encephalitis, but more than half of cases remain cryptogenic despite extensive investigations.   In retrospective case series, autoimmune or paraneoplastic causes of encephalitis with RSE make up the majority of cases with an established etiology, and a proportion of cryptogenic cases may be caused by antibodies yet to be described. Immunotherapy has been proposed as empiric treatment for RSE and emerging evidence suggests that this may benefit patients with NORSE specifically. Currently, there are no published protocols to guide the diagnostic work-up of NORSE, and while there are general recommendations for the management of RSE, no specific guidelines address which treatment options should be given and when, particularly when it comes to immunotherapy. We sought to identify practice patterns in the diagnosis and management of NORSE in order to identify commonalities that could be used to standardize the approach to these patients and to identify areas of uncertainty that require further study…

Within 24 h, most practitioners obtain a non-contrast head CT (100%), continuous EEG (89%) and lumbar puncture (LP; 76%). Microbe serologies, particularly viral studies, are sent during this period by 42%. Between 24–72 h, 55% obtain a brain MRI. More than one-third also begin an autoimmune work-up (42%), anti-neuronal antibodies (40%), and cytology/flow cytometry (35%) during this period. After 72 h, no clear consensus emerged regarding further work-up. The majority of practitioners reported that they would never obtain a SPECT, brain/body PET, genetic testing or angiogram without an additional indication. Similarly, heavy metals, porphyrins, ovarian/testicular ultrasound, 14-3-3 protein, and neoplastic screening CT of the chest, abdomen, and pelvis were not regularly considered as part of the work-up…

For a patient with NORSE refractory to an initial anesthetic agent, respondents indicated they would first administer: additional AEDs (77%), additional anesthetics (52%), and antimicrobials (37%). Steroids (24%) were considered next followed by plasma exchange (PLEX; 28%). A five-day course of pulse-dose methylprednisolone was the most commonly used steroid regimen and typically started immediately in patients with a suspected autoimmune or paraneoplastic etiology, or when clinical symptoms, including RSE, do not improve within 1 week. Following immunotherapy, respondents reported using the ketogenic diet (41%) or hypothermia (25%).

Nearly one-third (29%) of respondents reported they would never use IVIG in the setting of NORSE; 24% would not use PLEX. Further, 29% eventually transition to steroid-sparing immunosuppressants. Most respondents do not consider transcranial magnetic stimulation, electroconvulsive therapy, or epilepsy surgery unless indicated for another reason.

Efficacy was ranked the most influential determinant when choosing AEDs (64%) followed second by drug interactions (43%) and third by hemodynamic instability (36%). Respondents selected anesthetics in the following order: midazolam, propofol, pentobarbital/thiopental, and ketamine…

The most consistently tested causative agent was HSV, for which 99% tested CSF via PCR in the first 24 h. HSV is the most commonly diagnosed viral encephalitis and there is an established role for early treatment as delays beyond 48 h after hospital admission can be associated with a worse prognosis. Thus, it is often standard practice for anti-viral therapies to be started empirically and continued if diagnosis is confirmed. Ninety-two percent tested VZV within this same time period. We found that Enterovirus is less often tested at 61% compared to HSV and VZV, despite the combination of the three making up the vast majority of diagnosed viral encephalitides. Infectious etiologies with important public health implications, such as WNV and mycobacterium tuberculosis, as well as treatable disease like mycoplasma pneumoniae, were less frequently tested for and not included as part of the initial work-up. 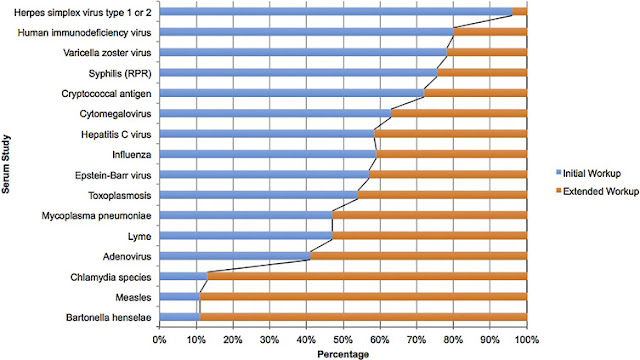 We found that one-quarter of respondents would never perform an autoimmune or paraneoplastic work-up in the setting of NORSE unless indicated for another reason. This could result in a significant number of missed diagnoses as a recent multi-institutional retrospective review of 130 NORSE cases found that autoimmune and paraneoplastic were the most common identifiable etiologies at 19% and 18%, respectively, with 52% remaining cryptogenic. Further, the favored initial autoimmune work-up primarily encompassed rheumatologic antibodies, e.g., ANA, dsDNA, rheumatoid factor, ANCA, etc., while an expanded work-up included anti-neuronal antibodies. Ideally, autoimmune and paraneoplastic evaluations would coincide, as there is no evidence that one is more prevalent in NORSE than the other. This may be due to the higher expense of the anti-neuronal/paraneoplastic antibody panels or long wait times for results after sending the specimens to the few labs that are equipped to perform the analysis.

There was a preference of sending a serum and CSF specimen for the anti-neuronal/paraneoplastic work-up, which the majority of providers (72%) agreed was more appropriate than sending any one specimen alone. This is consistent with increased sensitivity for NMDA receptor antibodies when both CSF and serum are tested (sensitivity 100% and 85.6%, respectively). Some providers may desire to avoid subjecting a patient to a repeat LP, after an initial one that was performed within 24 h to rule out infectious etiologies. However, repeat LP may ultimately be necessary in some situations even to fully rule out infectious causes as the HSV CSF PCR sensitivity increases 4 or more days after symptom onset.

A majority of respondents would not perform a malignancy work-up, e.g., CT, PET, or ultrasound, in the setting of NORSE despite paraneoplastic disorders (PND) being a commonly diagnosed etiology.  A neoplastic work-up would be particularly important in the setting of a positive anti-neuronal antibody, especially one with a known association with tumor (e.g., NMDA receptor antibodies and ovarian teratoma), as treatment of the tumor may be therapeutic/curative for the PND . There may exist some system barriers to obtaining inpatient PET scans, as RSE likely would not be a recognized indication. However, in situations where the etiology of NORSE is cryptogenic or the clinical scenario points to PND, then this work-up would be warranted.

Based on our survey of, expert opinion on the diagnostic approach to NORSE, studies performed within the initial 24 h of presentation include CT head, continuous EEG, LP and microbe serologies that include HSV, VZV, and bacterial evaluation. Thereafter, MRI brain followed by repeat LP to evaluate for an autoimmune or neoplastic cause should be obtained. Additional work-up should be individualized to the patient and based on clinical context.
Posted by Galen Breningstall, MD at 11:21 AM