The parents of a baby who died minutes after being born with a rare condition, in which the legs are either partially or completely fused together, have donated their child's body to research.

The baby, who reportedly could not be assigned a gender due to the condition, was diagnosed with sirenomelia, also referred to as "mermaid syndrome." 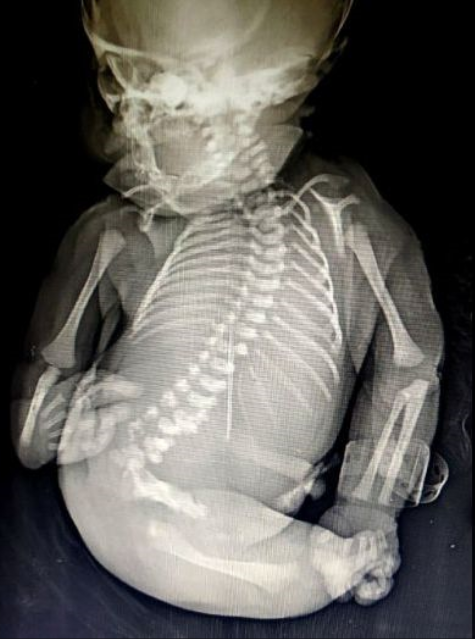 Born on Monday at a hospital in India, the baby died just 15 minutes after birth due to breathing issues, SWNS reported. The parents, who were not identified, reportedly new that their child would have congenital issues, but did not know about sirenomelia.

"While performing the delivery, we thought that a head or feet would come out," Dr. Sanjay Bansode, head of gynecology at Ramanand Teerth Rural Medical College, told SWNS. "But, to our surprise, the baby was born with mermaid syndrome."

Bansode said only 300 cases of the syndrome have ever been documented.

The exact cause of sirenomelia is unkown, according to the National Organization of Rare Diseases (NORD). It is often fatal during the newborn period and is associated with severe life-threatening complications.

"Babies with mermaid syndrome do not live more than 24 or 48 hours," Bansode said. "We are in the process of preserving the infant's body. The baby's parents have donated the body for research purpose for medical students."

Abstract
A 40-year-old pregnant woman presented with a fetal abdominal cyst and oligohydramnios. Color Doppler scan revealed a single blood vessel from the fetal aorta into a single umbilical artery. Severe oligohydramnios limited ultrasonographic evaluation of the fetal lower limbs, kidneys, or bladder. The pregnancy was terminated; the fetus showed fused lower limbs, bulging abdomen, and absent external genitalia and was diagnosed with type III sirenomelia. On autopsy, no normal bladder was observed, but duodenal atresia, anorectal atresia, and right renal agenesis were found. An intra-abdominal cyst, diagnosed histologically as a saccular cloaca, occupied the abdominal cavity. Ultrasonographic diagnosis of fetal sirenomelia is difficult due to poor depiction of the lower limbs. A vitelline artery leading to a single umbilical artery and a fetal abdominal cyst occupying most of the abdominal cavity are considered fetal sirenomelia associated with large defects of the gastrointestinal and genitourinary tracts.

Abstract
Sirenomelia is a rare congenital malformation that results in the fusion of the lower limbs together with multiple visceral anomalies. We report a case of sirenomelia observed in Mauritius and the different findings seen in the baby. The baby had fused lower extremities and bony structures for each leg were present. The umbilical cord consisted of a single artery and one vein. The external genitalia was absent and an imperforate anus was also seen. An x-ray revealed poorly expanded lungs and two distinct sets of femur and tibia were seen on imaging. However, a fused fibula and a fused talus were also noted. Multiple theories have been suggested for the pathogenesis of this condition, and despite recent progress in pathology, this condition remains debated.

PATIENT CONCERNS:
We report a case of combined sirenomelia, anencephaly and complete rachischisis, diagnosed in the 16th week of gestation.

DIAGNOSES:
To our knowledge, this is the 7th case in the literature and the first that is diagnosed so early in pregnancy.

INTERVENTIONS:
The final diagnosis is confirmed with radiological examination after the termination of pregnancy.

OUTCOMES:
Prenatal diagnosis of sirenomelia is difficult due to the presence of kidney agenesis and severe oligohydramnios.

LESSONS:
The combination of sirenomelia and craniorachischisis totalis is extremely rare and prenatal ultrasound scan are a challenge, even for experts in the field.
Posted by Galen Breningstall, MD at 10:07 AM