A friend recently told me of when her prenatal specialist would see her child during her sonograms, he would comment, “He’s perfect.” Once her son was born with Down syndrome, she visited that same doctor. He looked at her little boy and said, ‘I told you. He’s perfect.’

Her story tore me apart. While I was so grateful for my friend’s experience, it filled me with such sorrow because of what I should have had. I wish you would have been that doctor.

I came to you during the most difficult time in my life. I was terrified, anxious and in complete despair. I didn’t know the truth yet about my baby, and that’s what I desperately needed from you. But instead of support and encouragement, you suggested we terminate our child. I told you her name, and you asked us again if we understood how low our quality of life would be with a child with Down syndrome. You suggested we reconsider our decision to continue the pregnancy.

From that first visit, we dreaded our appointments. The most difficult time in my life was made nearly unbearable because you never told me the truth. My child was perfect.

I’m not angry. I’m not bitter. I’m really just sad. I’m sad the tiny beating hearts you see every day don’t fill you with a perpetual awe. I’m sad the intricate details and the miracle of those sweet little fingers and toes, lungs and eyes and ears don’t always give you pause. I’m sad you were so very wrong to say a baby with Down syndrome would decrease our quality of life. And I’m heartbroken you might have said that to a mommy even today. But I’m mostly sad you’ll never have the privilege of knowing my daughter, Emersyn.

Because, you see, Emersyn has not only added to our quality of life, she’s touched the hearts of thousands. She’s given us a purpose and a joy that is impossible to express. She’s given us bigger smiles, more laughter and sweeter kisses than we’ve ever known. She’s opened our eyes to true beauty and pure love.

And my prayer is when you see that next baby with Down syndrome lovingly tucked in her mother’s womb, you will look at that mommy and see me then tell her the truth: ‘Your child is perfect.'” 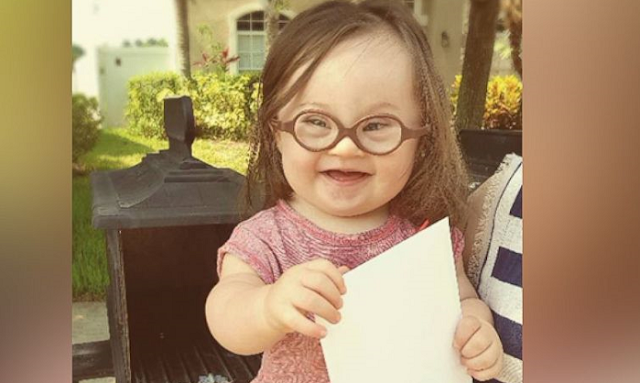 When Courtney Baker found out that her unborn daughter had Down syndrome, she felt anxious and afraid, but she also knew that her daughter was a valuable human being.

Abortion was not an option for the Sanford, Florida mom, and she told her doctor that. But, as is increasingly typical for families in similar situations, she said her doctor continued to pressure her to abort her daughter.

More than a year after her daughter Emersyn “Emmy” Faith was born, Baker mustered the courage to write her doctor a letter and put it in the mail, ABC News reports. She sent the letter at the end of May, but she said she began thinking about writing it before Emmy was born. In the letter, she explained how valuable her daughter Emmy’s life is and how wrong it is to pressure anyone to have an abortion.

“Every action from opening and closing the mailbox, to raising the red flag, was closure for me,” Baker told ABC. “I have no idea how the doctor might have reacted to my letter, but I do have faith that God can work any miracle and He can change any heart.”
Unborn children with disabilities often are singled out for abortions across the world. The eugenic push has prompted several U.S. states to pass bills banning these discriminatory abortions. This spring, Indiana became the second state to pass a law banning abortions based on a genetic disorder, race or sex. North Dakota was the first in 2013.

Studies have confirmed that unborn babies with Down syndrome often are targeted for abortions, with abortion activists and sometimes doctors pushing misconceptions about disabilities and playing into parents’ fears. Many families have shared their stories with LifeNews.

Stories like the Bakers’ are raising awareness about this problem and shedding light on the value of children with special needs.

“Emmy is proof that children with special needs are worthy and can change the world,” Baker said. “She’s doing it right now.”