Just a little more than a year after Miracle film producer Gordon Gray and his wife Kristen learned both their young daughters Charlotte and Gwenyth were afflicted with the rare and fatal brain disease Batten CLN6, Gray’s desperate race against time for a cure has led to a potential medical breakthrough. The girls were the pioneer recipients of the first gene therapy of its kind in humans in a clinical trial begun at Nationwide Children’s Hospital in Columbus, OH. Gray tells Deadline that he is already seeing signs of a rebound in Charlotte, the 5-year old whose motor and verbal skills were eroding at a heartbreakingly fast rate. 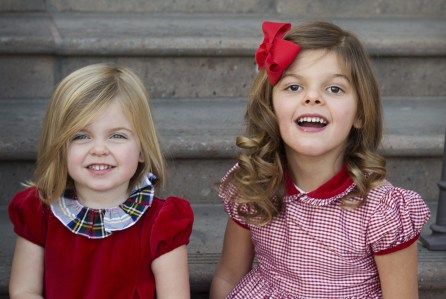 In March, Charlotte was given the equivalent of a magic bullet: a virus infused with the healthy CLN6 gene that was missing from her brain, and which allows cells to purge built-up wastes and restore balance in the brain. That virus was introduced intrathecally into Charlotte’s spinal fluid, for a short ride to her brain. This was done almost exactly a year after the Grays were given the death sentence diagnosis by doctors and told there was nothing to be done except prepare for Charlotte to go blind, lose her motor and verbal functions and ability to feed herself, progressing to eventual death between ages 6 and 12. And then prepare to live the same nightmare once again, because even though Charlotte’s younger sister Gwenyth hasn’t shown symptoms, she too was diagnosed with the rare brain disorder. Gwenyth was given a preventive dose of the gene therapy clinical trial last week…


Charlotte’s deterioration has been halted, and she has begun to show slow signs of recovery. There are no guarantees in life, but the producer of so many inspirational underdog sports movies, who told Deadline last June that he needed a Doug Flutie-like Hail Mary pass to save his daughters, is cautiously optimistic this breakthrough may in fact have saved both their lives. But the ongoing trial is expensive, and he has pledged to help four more children who are lined up to receive the treatment by the fall. Another six, maybe more, are out there in the world, also hoping for a chance to stop the disease’s progression. So Gray continues to try and rally financial support and the appeal can be viewed here for what he feels could be an historic medical breakthrough for children afflicted with Batten CLN6 and other similar brain diseases.


“The news is good,” Gray said. “We fought really hard after being told Batten was rare, fatal with no cure and when we refused to accept that, we were told even if you want to get FDA approval to get a clinical trial going, it would take five to six years. We didn’t have that time and we’ve managed to get something done. The doctors won’t say they treated anyone because it’s all investigational, but Charlotte was the first patient in the clinical trial on March 10. This past Friday, April 22, we entered my second daughter Gwenyth, into it. I’m so grateful to have gotten to this point but it feels like we’re starting from day one again. We need to keep this trial going, and Charlotte has lost so much ability because of this disease.


“I used to call her the mayor, because she never stopped talking, and she knew everyone’s name,” Gray said. “She went from being that kind of child to, right before we entered her into the trial, being down to one-word sentences, with no word more than two syllables. She’d gone from this girl who’d get on her little scooter going up and down the beach to having real difficulty walking. There’s receptive and expressive communication, and she seemed to understand most of what I say to her, but she has difficulty communicating and it’s only because we spend so much time with her that we understand what she wants,” Gray said. “The one thing about Charlotte is she was a happy vibrant child with a big expressive personality and hasn’t lost any of that joy and happiness, despite the difficulties walking, talking and eating and going through her daily life.”
Things have improved since the treatment that have given the Grays real hope for the first time in a long time.
“She seems to be making progress,” Gray said. “It seems like she’s more present, more engaged; she’s joking a little bit, in her own way. If there’s a song that mentions happy, she’ll say, ‘no, sad,’ and laugh. That’s her way of joking. She’s sitting up a little straighter, and she’s walking better. Doctors and especially scientists, they are very conservative, but I’m incredibly hopeful and they are optimistic and that’s the best they are going to give me. But she is making strides. If this worked, and God I hope it did, we now have to just put her back together. There’s something called Neuroplasticity, where the brain can sort of rebuild itself. But the first thing we had to do was arrest the progression of the disease.”…
Then came the miracle Gray was looking for, in the form of a doctor named Brian Kaspar, another named Jerry R. Mendell and a third named Emily C. De Los Reyes. They had taken Spinal Muscular Atrophy to clinical trial and even though this had nothing to do with Batten CLN6, there was a common thread.
“I asked Brian if he would be willing to pursue a clinical trial with the girls and everyone else afflicted with this disease, and when I got on the call, he wasn’t even really familiar with Batten,” Gray said. “He said he would look into it, and based on some of the work he’d done with SMA, he was not unfamiliar with gene therapy, something he was pursuing. He asked my daughters’ names, and told me, ‘I too have a daughter named Charlotte.’…
Gray sees signs of improvement in Charlotte, and even though he’s made a career out of producing movies with happy endings, he said all this constitutes just one giant step on a long road. “There are no biomarkers to see if the therapy worked,” he said. “It’s like if someone put a bomb under your table and you try to defuse it. The only way you’re going to know you haven’t been successful at defusing the bomb if it blows up. The only way we’ll know if the treatment for my youngest daughter Gwenyth didn’t work is if she starts to decline. And the only way I’ll know with Charlotte is if she becomes overtly better, or she starts to decline again. You just have to wait.”
http://deadline.com/2016/04/miracle-producer-gordon-gray-gene-therapy-breakthrough-batten-cln6-disease-charlotte-gwyenth-gray-1201745102/ 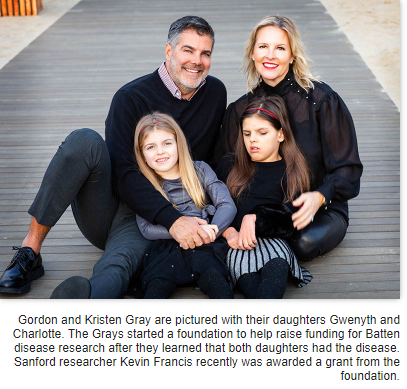 Posted by Galen Breningstall, MD at 11:24 AM