Diagnostic utility of exome sequencing in the evaluation of neuromuscular disorders

OBJECTIVE:
To evaluate the diagnostic yield and workflow of genome-scale sequencing in patients with neuromuscular disorders (NMDs).

RESULTS:
The overall diagnostic yield of exome sequencing in our cohort was 12.9%, with one or more pathogenic or likely pathogenic variants identified in a causative gene associated with the patient's disorder. Targeted gene lists had the same diagnostic yield as a broad NMD gene list in patients with clear neuropathy or myopathy phenotypes, but evaluation of a broader set of disease genes was needed for patients with complex NMD phenotypes. Most patients with NMD had undergone prior testing, but only 10/16 (63%) of these procedures, such as muscle biopsy, were informative in pointing to a final molecular diagnosis.

CONCLUSIONS:
Genome-scale sequencing or analysis of a panel of relevant genes used early in the evaluation of patients with NMDs can provide or clarify a diagnosis and minimize invasive testing in many cases.

Retrospective analysis of the NMD patient cohort revealed that most individuals had undergone an extensive prior workup, often over a period of many years. Almost half (43%) of patients had undergone a muscle biopsy before enrollment in this study, and almost 10% had undergone a nerve biopsy. A majority (86%) had prior electrodiagnostic testing. Furthermore, most patients (67.7%) had previously had negative single gene testing, with an average of roughly 2 genes tested per patient, and 20.4% of patients had prior multigene panel testing, all with negative results (since not having received a molecular diagnosis was necessary for participation in the study). All prior diagnostic workup is summarized in figure 1, illustrating the challenging nature of obtaining an accurate diagnosis in such patients… 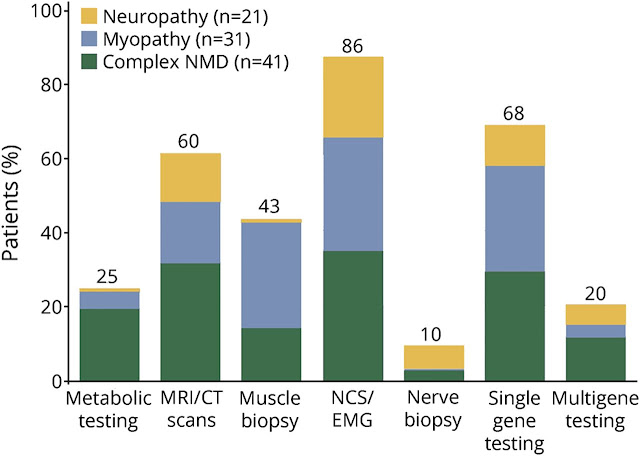 In at least 2 cases, WES identified molecular diagnoses that directly impacted medical treatment. In case H this patient was thought to have a chronic inflammatory demyelinating polyneuropathy; WES identified 2 frameshifting indels in SACS, consistent with Spastic Ataxia of Charlevoix-Saguenay, and consequently, this individual was not started on immunotherapy. In 1 patient previously thought to have hereditary spastic paraplegia, WES identified a nonsense variant in GCH1, indicating dopa-responsive dystonia (MIM 128230). This patient demonstrates the dramatic utility that can stem from making a correct diagnosis, as she was started on dopa therapy and regained the ability to walk without assistance…

Only 62.5% of prior muscle biopsy or electrodiagnostic testing suggested the type of NMD in patients later found to have a pathogenic mutation in an NMD gene. Often, the prior testing could identify no specific myopathy/neuropathy or did not identify the same type of myopathy/neuropathy indicated by the genetic testing result. Uninformative muscle biopsies were often apparently normal, or consisting mainly of fat tissue, which while possibly consistent with mild myopathies, or later stage myopathy or muscular dystrophy, are not informative toward a specific diagnosis. Nerve conduction studies that were informative often delineated the affected region (proximal vs distal) and those that were uninformative often were due to being normal or limited due to the patient being uncomfortable with the procedure. One limitation of our analysis is that patients in this study were often enrolled on the basis of being undiagnosed, despite extensive prior testing, potentially biasing the present analysis in a way that makes invasive or prior testing appear to be less informative than in an unselected cohort. Nevertheless, we propose the use of sequencing early in the diagnostic workup of patients with NMD, particularly in complex cases in which additional testing may be likely to be uninformative in pointing to a specific diagnosis.

The decreasing cost of massively parallel sequencing, coupled with clear diagnostic utility, raises the question of the precise role that genomic analysis should have in a diagnostic workup for NMDs. A thorough physical examination, clinical history, and common laboratory test results should always be obtained first to identify more common, nonheritable causes of NMD. WES cannot reliably detect some major causes of several more common NMDs, including large deletions, duplications, and repeat expansions such as those causative of Duchenne muscular dystrophy, type 2 myotonic dystrophy facioscapulohumeral muscular dystrophy, or CMT1A. If a heritable condition amenable to sequencing is considered most likely, it is reasonable to consider a “sequence-early” approach, consisting of a dedicated gene panel or exome sequencing with targeted analysis.

Given the potential costs, invasiveness and incomplete yield from muscle biopsy, as well as the cost of testing for a broad array of hereditary conditions using traditional Sanger single gene testing, we suggest that genome-scale sequencing or multigene panel testing be considered early in the diagnostic process in patients likely to have a monogenic neuromuscular disorder, particularly in complex or challenging cases. Early genome-scale sequencing may shorten the diagnostic odyssey, minimize invasive testing, and provide potential opportunities for clinical and investigational therapeutics for patients with NMD.