A 19-year-old man with ACTA2 mutation presented with a right intracranial ICA fusiform aneurysm. His past medical history included recurrent aortic dissections involving the arch and thoracoabdominal aorta, previously treated with arch replacement and grafts to the innominate and left common carotid artery, left common carotid to left subclavian bypass, and bilateral iliac and thoracoabdominal aortic stents. In 2013, he had a right hemispheric ischemic stroke with complete recovery after intravenous tissue plasminogen activator.

Workup demonstrated large bilateral fusiform petrous-cavernous ICA aneurysms, the right larger than the left . He developed worsening headaches and significant aneurysm growth over 1 year of follow-up, with erosion of the bone at the skull base and protrusion of the aneurysm sac to the mesial temporal lobe. 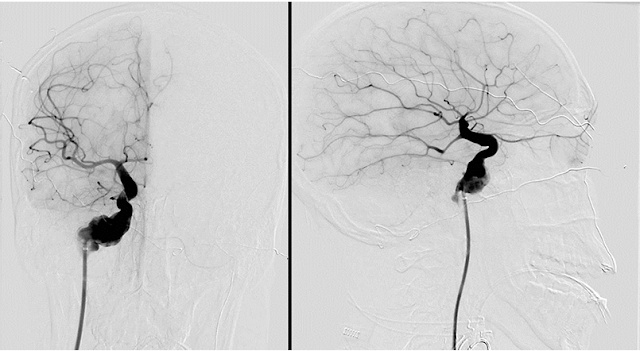 Due to the risk of subarachnoid hemorrhage despite the proximal location, the decision was made to treat the right ICA aneurysm first with flow diversion. Given the patient’s ACTA2 mutation, recurrent dissections and extensive aortic instrumentation resulting in an extreme angle of the right common carotid artery off the aortic arch, a transfemoral vascular approach was considered exceptionally difficult and high-risk. The decision was made to access the aneurysm surgically through the cervical carotid.

Aspirin 325 mg/d and clopidogrel 75 mg/d were started 10 days prior to the procedure, with adequate platelet suppression on platelet aggregometry testing. With the patient under general anesthesia, the neck was prepped and draped in a sterile fashion. Following surgical exposure of the right carotid bifurcation, an incision was made in the proximal ICA, a 6-French Shuttle® guide sheath was introduced and the carotid incision was sutured around the Shuttle. Heparin was administered.
A working angle for Pipeline™ embolization device (PED) deployment was obtained. Under fluoroscopic guidance, an intermediate catheter was navigated over a standard microcatheter and microwire to the distal cervical ICA. The microcatheter was then positioned distal to the aneurysm. Four overlapping PEDs were deployed successfully in a telescopic fashion from distal to proximal. Angiography demonstrated adequate wall apposition of the PEDs at the distal and proximal landing zones, with reduced flow to the aneurysm and partial contrast stasis. The catheters were removed, the carotid was sutured and the neck incision was closed, leaving a drain in place for 24 hours. The patient went home 3 days later without complications.

ACTA2 is a gene encoding alpha-2 actin, a major component of vascular smooth muscle. ACTA2 mutation is associated with early-age thoracic aortic aneurysms and dissections.1 Some patients have manifestations of diffuse smooth muscle involvement and cerebrovascular abnormalities including Moyamoya disease and fusiform and saccular intracranial aneurysms.

Our patient with ACTA2 mutation had bilateral ICA fusiform aneurysms. Given the worsening headaches, aneurysm growth and concern for intradural extension, the decision was made to treat with flow diversion. In light of the patient’s previous aortic dissections involving the arch and descending thoracoabdominal aorta, as well as his extensive prior vascular procedures, transfemoral access with a large guide sheath was concerning for potential vascular complications, including new dissections or injury of the previously dissected and replaced thoracoabdominal vessels. Furthermore, his extensive aortic instrumentation made percutaneous femoral access and catheter navigation through the aorta nearly impossible. Surgical exposure of the carotid artery at the neck with access through a carotid cutdown was performed, followed by endovascular delivery and deployment of PEDs without complications.

Notably, the patient’s brother carried the same genetic mutation and developed aneurysms in the identical location. Our combined surgical-endovascular approach was successfully used to treat the brother’s aneurysm as well…

A previous study reported alternative access for a variety of neurointerventional procedures in 21 patients.  Surgical cutdown was performed in 12 patients (8 in the carotid and 4 in the vertebral artery) and percutaneous puncture in 9 (5 in the carotid and 4 in the brachial artery), with no access-related complications. These authors included patients between 50 and 82 years of age in whom the intracranial vasculature could not be accessed via the transfemoral route, mainly due to tortuosity in the aorta and supra-aortic vessels. The transradial approach is an alternative access route for PED delivery in elderly patients with a tortuous aortic arch.

Managing intracranial vascular lesions in patients with significant proximal large-vessel tortuosity, aortic arch disease or instrumentation, and genetic conditions is highly complex, due to vessel fragility and the risk of complications. Alternative access for an intracranial procedure should be considered in these patients. As demonstrated in the case of this young patient with ACTA2 mutation, cervical carotid surgical cutdown can provide optimal access, allowing a safe and efficient approach to endovascular flow diverter treatment of a large dysplastic aneurysm.