A 15-year-old British teen who suffered from strep throat in June has since developed a rare psychiatric condition that causes involuntary outbursts and tics.

“When it happens it’s like he’s been imprisoned. I’m scared to take him out or let him go anywhere in case it happens in public,” Lee Wilson’s mother, Lisa Bullen, said of her son. “It comes out of nowhere. His eyes roll back and it’s really shocking to see.”

Lee has been diagnosed with PANDAS, or pediatric autoimmune neuropsychiatric disorders, associated with Streptococcus infections. The neurological condition, which is a subtype of PANS (pediatric acute-onset neuropsychiatric syndrome), can bring on or worsen symptoms of obsessive-compulsive disorder (OCD) and tics, according to the National Institute of Mental Health.

Those who develop the condition following a strep infection are said to often show signs “overnight and out of the blue,” says the institute.

“It’s incredibly disturbing. There’s nothing I can do to help him. He just sits there dribbling and drooling and making these awful noises,” Bullen, 36, told South West News Service (SWNS), a British news agency. “It’s like he’s been possessed by a ghost or something and to be honest it scares the life out of me.”

“He’s imprisoned in his own mind.” 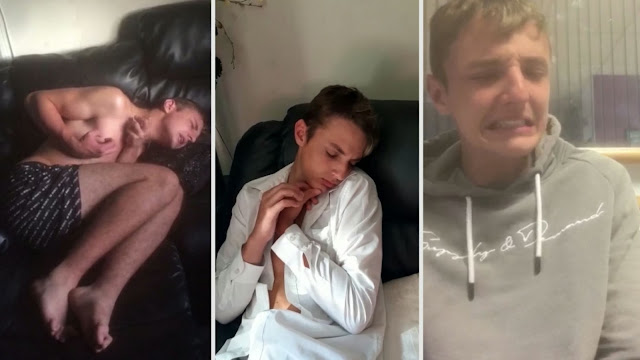 PANDAS can occur when a strep infection “causes an abnormal immune response resulting in neuropsychiatric symptoms,” according to the Genetic and Rare Diseases Information Center (GARD)....

Bullen said her son’s condition developed just days after he suffered a strep infection. Though he was treated with antibiotics, his symptoms persisted. She has since taken him to numerous doctors in an attempt to understand, as Bullen put it, Lee’s “personality change.”

Before Lee was formally diagnosed with the condition, Bullen said, many doctors told her that he needed to be admitted to a psychiatric institute.

“I felt like I had to constantly fight to prove my son wasn’t mental," said Bullen. "I knew he was really, really ill and not crazy. I was devastated by it all. My son just wasn’t the same person anymore.”

Lee continues to suffer from tics and fits. When they occur, the teen’s body becomes rigid. He laughs and cries uncontrollably.

Treatment for PANDAS typically includes medication and cognitive behavioral therapy. In severe cases, intravenous immunoglobulin therapy and plasmapheresis — or plasma exchange — are sometimes considered. Most people with PANDAS can recover with treatment, though they can redevelop the condition if another strep infection occurs.

Lee will soon see neurologists at the Evelina Children's Hospital in London for further treatment, his mother said.

"I’m so worried for his future,” she said. “My son isn’t the person I remember him to be. It is heartbreaking for me.”

Posted by Galen Breningstall, MD at 11:46 AM