After suffering several miscarriages, Kiera Meldrum, 20, was delighted to learn she was pregnant again in July 2018. But roughly five months into her pregnancy, the United Kingdom woman was told her unborn daughter was suffering from a serious medical condition that spurred doctors to recommend abortion.

But Meldrum, of York, refused … fourteen times, she claims.

“I refused to terminate Lillee-Rose every time they told me to, and I'm so happy I listened to my heart instead of the doctors,” Meldrum told SWNS of her now 6-month-old daughter.

Doctors told Meldrum her child had Grade 3 severe ascites to the bowel, a condition that causes an abnormal buildup of fluid in the abdomen. The mother was told Lillee-Rose was suffering from the condition at her 21-week scan.

"I felt sick when they told me she wasn't well, but I just knew my little girl was a fighter and that she could make it,” she recalled. "There was no way I was terminating my pregnancy —  I'd waited so long to become a mom and I was determined to do all I could to protect my baby."

At 28 weeks, the baby’s bowel ruptured— prompting doctors to recommend an abortion once more, the mom said. Amniotic fluid was also building up inside Meldrum, causing her immense pain.

“My stomach swelled up enormously, and it felt like I was carrying a giant painful water balloon against my tummy. Doctors said that draining the fluid could hurt my baby, and after being told how poorly she already was, I knew I couldn't do anything risky,” she told SWNS.

"I was in constant pain, but I had to do everything I could to protect my baby or I'd never forgive myself."

In February, Meldrum went into labor and gave birth to her daughter at 34 weeks. The little girl, who weighed just over 4 pounds when she was born, required emergency surgery shortly after to repair her ruptured bowel, her mother said.

“I was terrified of losing her and watching them whisk her straight away from me and into surgery broke my heart,” she said.

Lillee-Rose was required to stay in an incubator at Leeds Teaching Hospitals for the first eight weeks of her life. Finally, following a second surgery, she was given permission to go home.

A doctor at the hospital told SWNS Lillee-Rose suffered from a rare birth defect called jejunal atresia with ascites, “which affects between 1-3 babies in every 10,000 born and requires complex specialist surgery to correct.”

Though the young girl will require check-ups every few months to ensure her bowel is healing and functioning properly, her mother said she’s doing well and getting stronger each day. 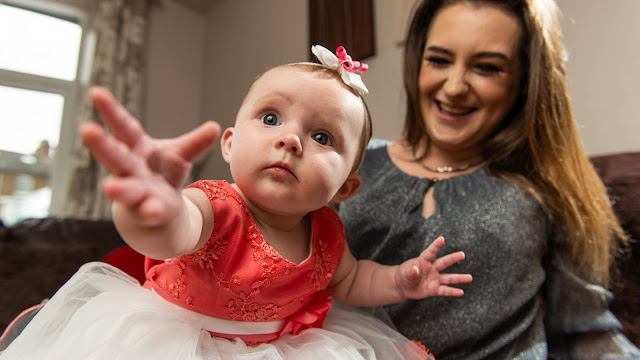 “Doctors told me every week to terminate my pregnancy, and hearing that advice over and over again was horrific, but something told me Lillee-Rose would make it through,” she said. "My baby girl never stopped fighting and finally having her home with me is a blessing. She's my little miracle."