Adam Recke's classmates in the Bethlehem Area School District have never focused on his disease.

The senior from Bethlehem Township was diagnosed with a rare neurodegenerative disorder at age 6 that for many years was not obvious at first glance.

Today its toll is more evident. But that hasn't stopped Recke from making friends, cheering on Philly sports teams, going to dances, acting in plays and just being a teenager.

On Saturday night, he took it a step farther. Thanks to his classmates, the Freedom High School senior was able to add the title of homecoming king to his list of accomplishments.

He learned of his win during Freedom's homecoming dance, where he was crowned along with queen Shalyn Banas. 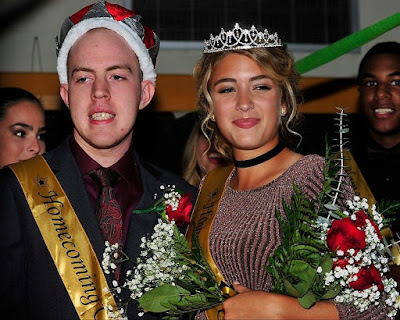 Recke has Type-C Niemann Pick Disease, a rare terminal disease that afflicts only 500 people around the world and has no cure. It's also known as childhood Alzheimer's.

He cannot metabolize cholesterol and other lipids in his body, which causes them to build up in his liver, spleen and brain at toxic levels that destroy the cells controlling mobility and cognition.

Recke is participating in a two-year clinical trial of a drug that's been shown to help reverse the decline of those with his disease.

His father, Sean Recke, and Lehigh Valley Health Network successfully petitioned for the network to become a study site, eliminating the twice-a-month commute to Maryland the family endured during the first phase of the trial.