Texans like to boast that their state is oversized on everything from job creation to cowboy hats, but its latest big news is nothing to be proud of. According to a just-released report from the journal Obstetrics and Gynecology, maternal mortality doubled in the state from 2011 to 2014. Unbelievably, Texas now has the highest rate of maternal mortality in the developed world. The United States as a whole is pretty shameful on that score, to be sure, with a rate that places it between Qatar and Bahrain. Moreover, the national rate has been rising in recent years—California is the only state that has managed to significantly lower maternal mortality. Even so, Texas is way out of line. What gives?...

Before I started working on this column, I pictured maternal mortality as death during pregnancy or childbirth. In fact, the statistics include every form of death except non-pregnancy-related cancer and accidents for up to a year after the pregnancy’s end. (This would include deaths from abortion, but despite the concerns of Texas politicians, there seem to have been none of these.) Most Texas women who died post-pregnancy didn’t do so in the delivery room, but six weeks or more after childbirth. The three top causes: cardiac events, drug overdoses, and hypertension.

OBJECTIVE:
To develop methods for trend analysis of vital statistics maternal mortality data, taking into account changes in pregnancy question formats over time and between states, and to provide an overview of U.S. maternal mortality trends from 2000 to 2014.
METHODS:
This observational study analyzed vital statistics maternal mortality data from all U.S. states in relation to the format and year of adoption of the pregnancy question. Correction factors were developed to adjust data from before the standard pregnancy question was adopted to promote accurate trend analysis. Joinpoint regression was used to analyze trends for groups of states with similar pregnancy questions.
RESULTS:
The estimated maternal mortality rate (per 100,000 live births) for 48 states and Washington, DC (excluding California and Texas, analyzed separately) increased by 26.6%, from 18.8 in 2000 to 23.8 in 2014. California showed a declining trend, whereas Texas had a sudden increase in 2011-2012. Analysis of the measurement change suggests that U.S. rates in the early 2000s were higher than previously reported.
CONCLUSION:
Despite the United Nations Millennium Development Goal for a 75% reduction in maternal mortality by 2015, the estimated maternal mortality rate for 48 states and Washington, DC, increased from 2000 to 2014; the international trend was in the opposite direction. There is a need to redouble efforts to prevent maternal deaths and improve maternity care for the 4 million U.S. women giving birth each year. 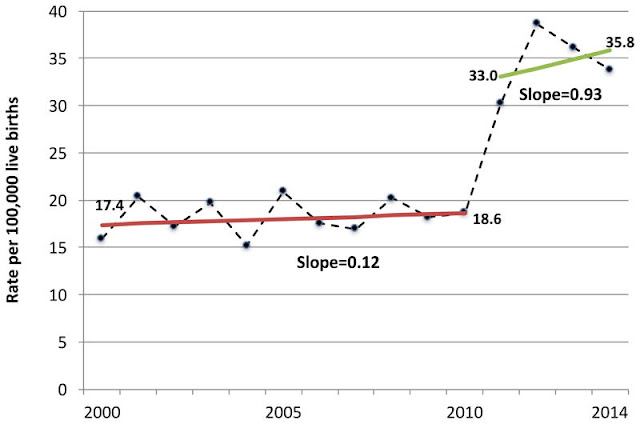