This leads to a physiological mechanism called lateral inhibition, which has the effect of causing a bright surround to an area appear darker and, conversely, a dark surround will make an area appear lighter. 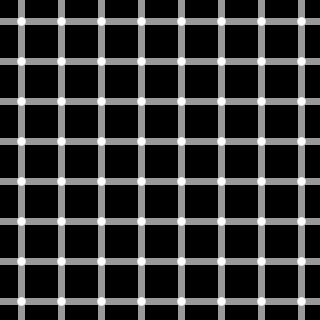 Your retina is partially composed of many small nerves, which function as receptors of light. These receptors are arranged in rows on the inside of your retina. A number of scientists have shown that it is possible to illuminate and record from a single receptor (A) without illuminating its neighboring receptors. It was discovered that if you illuminate a single receptor (A) you will get a large response; however, when you add illumination to A's neighbors, the response in A decreases. In other words, illumination of receptors "inhibits" of firing of neighboring receptors. This effect is called lateral inhibition because it is transmitted laterally, across the retina, in a structure called the lateral plexus.

The effect is greater in your peripheral vision, where lateral inhibition acts over greater distances. 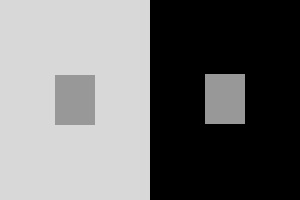 Many magicians use the principle of simultaneous contrast to conceal parts of their magical apparatus. For example, perhaps they want to conceal the supports of a floating body. The magician would make the surrounding parts brightly illuminated, shiny metallic objects, white cloth, etc. The parts the magician wishes to conceal are black, in front of a black background, usually drapery, and appear even darker to the viewer, dazzled by the rest of the display. The eye cannot make out the details in the darker parts.