Having been born without a left hand, Maureen Beck grew up with a gumption that attracted her to activities that “limb-different” athletes too often hear they shouldn’t pursue. First it played out on the soccer field when she was a little girl. Later it informed her approach to rock climbing, a sport in which she would become a two-time world champion…

Beck, who grew up in Maine and lives in Golden, is the subject of a 25-minute short film called “Stumped” that is part of the Reel Rock festival of climbing films now touring the country…
“We’ve been doing Reel Rock for 12 years,” said Pete Mortimer, who co-founded the Boulder-based Reel Rock. “We’ve brought to the world a lot of the big names and big characters from the climbing world like Alex Honnold and Ueli Steck. To me, Maureen is unarguably one of the best top-five characters we’ve ever had. She totally embodies the spirit of climbing. She doesn’t have any limits set. She has ideas about what she wants to do and she goes after those things. She’s just totally inspiring in a way that few people in the world are.”

“Stumped” includes scenes of Beck climbing in Utah and Wyoming but focuses on her five-month effort to climb a 5.12 route in Boulder Canyon that captured her imagination. In the grading system of climbing, 5.12 routes are difficult — Beck describes 5.12 as “the benchmark grade of, ‘I’m a real climber now.’ ” The route she picked, “Days of Future Passed,” was her first 5.12, and it took more than 20 days of climbing to solve — hence the multiple meanings of the title.

“There was something about it,” Beck said. “I can’t describe it, it’s intangible, but it feels doable even as you’re falling all over it. There’s just something there that I thought, ‘If I can just turn the switch, find the right puzzle (piece), it will go.’ ”

The 90-foot route, first climbed in 1996 by Bob D’Antonio and Greg Hand, is dead vertical with an overhang at the top.The crux is a 10-foot section that took Beck around 50 attempts to figure out.
“The hard part is this fairly blank section that has a crack in it that’s really slippery and is both too small for a fist and a hand and too big for fingers, so you’re kind of sliding around,” Beck said. “The feet (holds) are horrible, so you’re trying to traverse across this blank face using this awful crack. Once you can do that, there is this giant easy hold that signifies the end of the crux. It’s this process of getting from one big rest ledge to that giant hold.

“Then the hard part’s over, but there’s still another 30 feet of overhanging steep climbing. It’s not hard climbing but you’re so tired.”

Before she climbs, Beck wraps her stump (which medicine calls a congenital amputation) with tape. She is limited in the holds she can utilize with her left arm, but she does use the elbow and shortened forearm.

“I will grab holds different,” Beck said. “When I have to clip (a rope anchor) for lead climbing, I might do it in a different stance. I try to lead left (handed) whenever I can, to try to stay muscularly balanced and technique-balanced, but it’s definitely stronger right.”… 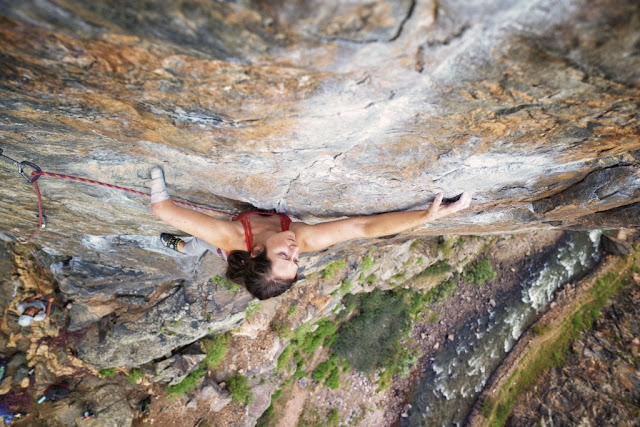 “When we first started filming, we were like, ‘Wow, how is she going to be able to climb at a pretty high difficulty level missing most of her arm?’ “Wright said. “For me it was like watching climbing through new eyes. It was just so wild to watch her climb at that level, but as we got to know Maureen we realized that was secondary to the journey she was on to climb 5.12. It became less about the arm and more about her pushing her own level in climbing.”

Beck is ambivalent, in fact, about her role as an inspiration. She hopes her example will lead others into adaptive sports — she has won gold medals at the past two Paraclimbing World Championships — but she resists being consigned to that niche.

“When it comes to being ‘Stumped,’ the point is you should try things that are ‘too hard,’ because sometimes if you chip away at it, it’ll work out,” Beck said…

We wanted this film to be, we’re climbers first, I am a woman climber second, and then, oh by the way, I happen to have one hand. The part that’s adaptive is a really small part of who I am.”