A Pensacola, Florida, family is in unspeakable anguish as members say goodbye to a dying 5-year old girl, just weeks after she was found to have an aggressive type of brain cancer.

Trying to convey her pain, heartbroken mother Ally Parker shared a photo that is capturing attention around the world.

The picture also shows the little girl's grandfather, who is suffering from ALS, or Lou Gehrig's Disease, sobbing by her bedside in a hospital room. 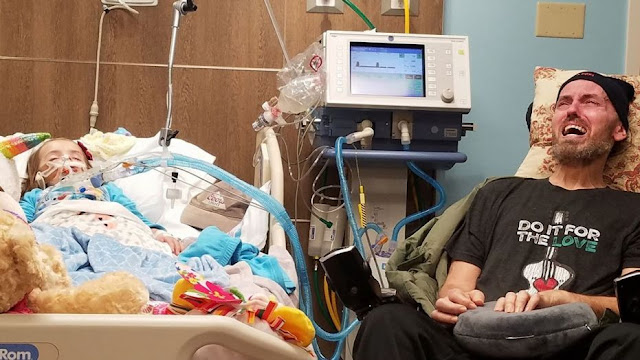 Braylyyn Lawhon received a diagnosis of Diffuse Intrinsic Pontine Glioma (DIPG), a rare cancer that typically kills its victims in less than one year, according to the National Institute of Health.

Braylyyn's grandfather, Sean Peterson, sitting bedside, may no longer be able to articulate words, but his expression speaks volumes.

In a Facebook post, Parker said she never imagined she would have to say goodbye to her daughter and her father at the same time.

"'In a few days I will have to bury this beautiful little girl. Months, maybe even weeks, later, I will have to bury my father.'  'Both of my heroes, gone, within the same year,' she continues. 'How could this happen to us? What did any of us do to deserve THIS?"

The gut-wrenching photo went viral right after Parker posted a message on Jan. 7.

"There is no one in this world who is evil enough to deserve to feel what I am currently feeling," she wrote. "My baby girl deserves to live a full, happy life, and so does every other child who has had to face DIPG."

As a last resort, the family was getting ready to try an experimental treatment in Mexico, but last week doctors found Braylyyn was bleeding from the tumor and her condition took a turn for the worse.

At this point, little Braylyyn is expected to pass away at any moment.


Prognosis of diffuse intrinsic pontine glioma (DIPG) is poor, with a median survival of 10 months after radiation. At present, chemotherapy has failed to show benefits over radiation. Advances in biotechnology have enabled the use of autopsy specimens for genomic analyses and molecular profiling of DIPG, which are quite different from those of supratentorial high grade glioma. Recently, combined treatments of cytotoxic agents with target inhibitors, based on biopsied tissue, are being examined in on-going trials. Spontaneous DIPG mice models have been recently developed that is useful for preclinical studies. Finally, the convection-enhanced delivery could be used to infuse drugs directly into the brainstem parenchyma, to which conventional systemic administration fails to achieve effective concentration. The WHO glioma classification defines a diffuse midline glioma with a H3-K27M-mutation, and we expect increase of tissue confirmation of DIPG, which will give us the biological information helping the development of a targeted therapy.
Posted by Galen Breningstall, MD at 9:40 AM