A meconium-stained, nonvigorous girl was born at 41 weeks of gestation via normal, spontaneous vaginal delivery to a 30-year-old, gravida 1, para 1 mother. The maternal history and prenatal laboratory test results were unremarkable. Meconium suction from the neonate’s airway and positive pressure ventilation for 30 seconds were provided according to the American Academy of Pediatrics/American Heart Association Neonatal Resuscitation Program guideline.

The girl’s Apgar score was 4 at 1 minute and 8 at 5 minutes. She was transferred to the neonatal intensive care unit (NICU) due to delayed fetal-to-neonatal transition. In the NICU, the patient’s vital signs were stable. Oxygenation at 4 L/min was administered via a high-flow nasal cannula for 6 hours to reduce desaturation. The results of chest radiographs and a complete blood count were normal. Antibiotics were started pending blood culture results.

At 24 hours of age, the newborn developed twitching on the left face, lasting 60 seconds, with eye blinking and jerking arm movements. A loading dose and a maintenance dose of phenobarbital were given. Results of cerebrospinal fluid studies were unremarkable. 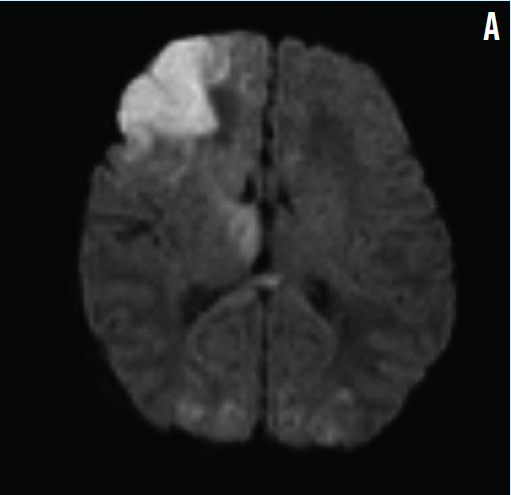 The etiology of arterial ischemic stroke in this infant was attributed to factor V Leiden heterozygous mutation. To our knowledge, 6 cases of perinatal stroke have been reported in association with factor V Leiden mutation, and all 6 involved hemorrhagic infarction…

Our patient had normal cognitive and motor development at follow-up at 15 months of age.