A 10-year-old boy with fainting spells and seizure activity

A 10-year-old boy with a history of multiple fainting spells is brought to an outpatient pediatric clinic by his parents. These spells are sometimes complicated by generalized tonic-clonic "seizurelike" activity.

The patient first started experiencing these attacks 8 months ago. His mother has noticed that the fainting most often occurs either in the early morning, after the sounding of an alarm clock, or during some type of sports activity. The child states that the seizures occur without warning, and they are sometimes associated with urinary incontinence or vomiting. According to the patient's family, the child remains unconscious for about 1 minute, after which he awakens abruptly, with no evidence of confusion and full recall of all of the events preceding the attack.

The patient was born full-term, without any complications. He has no chronic medical conditions and is not on any medications. As a result of experiencing similar symptoms, his father was diagnosed with epilepsy and started on treatment at age 8 years; however, the father has been without treatment and has not had any attacks since age 14 years. The patient's paternal uncle was also diagnosed with epilepsy at age 10 years; he died during a seizure at age 19 years. The patient has an 8-year-old brother who is well, with no history of seizures or fainting spells.

Upon physical examination, the patient is a well-appearing and well-developed boy whose weight and height are in the 50th and 60th percentiles, respectively. His oral temperature is 98.6°F (37°C). His pulse is strong at 66 beats/min, with a regular rhythm. His blood pressure is 105/65 mm Hg, and his respiratory rate is 15 breaths/min.

Head and neck examination findings are normal. The lungs are clear to auscultation, and normal respiratory effort is noted. Cardiac auscultation reveals normal S1 and S2 heart sounds, and no audible murmurs, rubs, or gallops are heard. His abdomen is soft, with no tenderness. No organomegaly is detected. The neurologic examination reveals intact cranial nerves and intact speech. Sensory and motor functions are normal in all extremities, without any pronator drift. The deep tendon reflexes are brisk and symmetric throughout. The patient's Romberg sign is negative, and his gait is stable.

The laboratory analysis, including a complete blood cell count and a basic metabolic panel with serum electrolytes (including calcium and magnesium), is normal. Chest radiography and brain CT findings are also normal. An ECG is obtained (Figure). 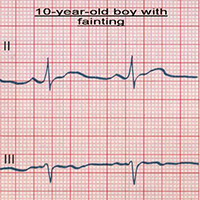 The patient's ECG showed a prolonged QT interval (Figure) The corrected QT (QTc) was 0.56 second. In addition, a biphasic T wave was seen in the precordial leads. His father's ECG  also showed a prolonged QT interval (QTc, 0.55 second) and a high-amplitude, rounded T wave in leads V2 and V3. On the ECG of the patient's 8-year-old brother, the QTc was 0.52 second, and T/U wave abnormalities in leads V2 and V3 were also detected.

In the context of the patient's history of recurrent fainting and the family history of "seizures" and sudden death, the prolonged QT intervals noted were very suggestive of intermittent ventricular arrhythmias caused by congenital long QT syndrome (LQTS).

LQTS is an electrical disease of the ventricular myocardium that is characterized by prolonged ventricular repolarization, which results in prolongation of the QT interval on the surface ECG and an increased risk for sudden death. It is characteristically associated with the potentially life-threatening cardiac arrhythmia known as torsade de pointes, which is a form of polymorphic ventricular tachycardia.

A prolonged QT interval may be acquired (usually resulting from drugs or electrolyte disturbances) or congenital. The congenital form is caused by mutations in the gene coding for the cardiac potassium, sodium, or calcium ion channels; about 400 mutations in 10 gene loci have been identified.  The distinct genetic types are designated LQT1-LQT10. LQT1, LQT2, and LQT3 account for over 90% of cases of LQTS, with some estimated prevalences of 45%, 45%, and 7%, respectively.  The specific genotype influences the clinical course, the kinds of triggering events that may initiate arrhythmias, the prognosis, and the recommended form of treatment. An underlying genetic predisposition has been identified in some patients with the acquired form of LQTS.

Traditionally, congenital LQTS has been characterized as two clinical entities:

Romano-Ward syndrome, which is inherited in an autosomal dominant fashion and only has cardiac manifestations.

Jervell and Lange-Nielsen syndrome, which is inherited in an autosomal recessive fashion and is associated with sensorineural deafness.

Most of the epidemiologic and clinical data on congenital LQTS come from reports from the International LQTS Registry. The registry, which began in 1979 and is still ongoing, is a major source of data on the incidence, natural history, and prognosis of patients with congenital LQTS.
The incidence of congenital LQTS is difficult to determine, but it is estimated to be 1 case per 2500-10,000 population, with most estimates around 1 case per 5000 population.[5] The range is broad because a large number of cases go undiagnosed; about 20%-50% of affected patients may not demonstrate QT prolongation on resting ECG. Technical difficulties and methodological controversies in accurately measuring the QT interval are in part to blame. It is nonetheless one of the most common causes of autopsy-negative, unexplained sudden death.

Women are more commonly affected than men. Patients with congenital LQTS usually present in childhood, adolescence, or early adulthood, and they usually present with palpitations, syncope or near syncope, seizures, or cardiac arrest. Syncopal episodes associated with secondary seizures may be misdiagnosed as primary seizure disorders. The seizures are probably secondary to hypoperfusion of the brain during arrhythmic events.

Cardiac dysrhythmias can be initiated by an external trigger, such as emotional stress, exercise, or sudden loud noises (ie, an alarm clock or telephone); however, this is not always the case. Ventricular arrhythmias may also occur during sleep, which is commonly seen in patients with the LQT3 genotype. In fact, the kind of triggering event is often linked to the underlying mutation, with certain triggers more commonly associated with certain genotypes.

As many as 10% of patients are only diagnosed with LQTS at the time of sudden death.[6] Mortality can be as high as 70% in patients who remain untreated over a 10-year period.[3] This emphasizes the importance of presymptomatic diagnosis and treatment. Important clues indicating that a patient may have LQTS include abnormal ECG findings, a family history of unexplained death, or hearing loss (which is present in around 4% of patients with LQTS).

In patients with suspected congenital LQTS, the initial evaluation should be directed at calculating the QTc interval on a resting ECG. The QTc interval is the QT interval corrected for heart rate because, under normal physiologic circumstances, the actual measured QT interval adjusts with the heart rate; in other words, it is longer at slower rates and shorter at faster rates. QTc is calculated by dividing the measured QT by the square root of the R-R interval (the Bazett formula), both of which are measured in seconds…

A scoring system for the diagnosis of congenital LQTS was established in 1985 by Schwartz and colleagues  and revised in 1993 but still serves as the best guide for clinicians today. It incorporates the ECG criteria (the measured resting QTc interval, history of torsade de pointes, presence of T-wave alternans or notched T wave on ECG, and low heart rate for age), the clinical criteria (syncope or congenital deafness), and family history (family members with definite LQTS or unexplained sudden death at < 30 years of age). Points ranging from 0.5 to 3 are assigned to each of the above criteria, and the points are added to calculate the LQTS score. Depending on the patient's score, the probability of having LQTS is rated as low (< 1 point), intermediate (2-3 points), or high (≥ 4 points). Additional testing, such as cold-water facial immersion or exercise testing, may be applied in patients in whom the diagnosis is still unclear.

Genetic testing for congenital LQTS is now available in specialized centers; however, the practical application of genetic testing is limited because of the complexity and heterogeneity of congenital LQTS. In addition, as many as 25% of patients have unknown mutations; therefore, a negative test does not exclude the disease. Once an index case with congenital LQTS is identified, evaluation needs to extend to all first-degree relatives, and treatment must be established where indicated.
The guidelines published by the American College of Cardiology, the American Heart Association, and the European Society of Cardiology consider "lifestyle modifications," defined as the contraindication of competitive sports and of all drugs known to prolong the QT interval, as a class I recommendation and an important strategy for the prevention of fatal arrhythmia in patients with congenital LQTS. The mainstay of medical treatment for LQTS is the use of beta-blockers.  Beta-blockers shorten the QT interval, which decreases the risk for torsade de pointes arrhythmia and reduces the incidence of syncope and sudden cardiac death. They are effective in approximately 70% of patients…