Approximately one in 42,000 children are born with a disease called CDKL5 Deficiency Disorder, according to a new medical report recently published in the journal Brain and presented last month at the 13th European Paediatric Neurology Society Congress in Athens, Greece. This means that each year there are over 100 new children born with the disease in the EU alone, and over 3,000 in the world.

The disease leads to frequent seizures shortly after birth and severe impairment in neurological development, with most affected people being unable to walk, talk or care for themselves. "When our daughter was diagnosed in 2009 they told us there were approximately 200 cases in the world," says Carol-Anne Partridge, chair of CDKL5 UK and the International CDKL5 Alliance, which represents patient organizations from 18 countries. "Today we know that these children were simply not being diagnosed correctly," she adds.

The study, by a medical team from the Royal Hospital for Children in Glasgow, kept track of all births in Scotland during three years and applied genetic testing to all children under 3 years of age who developed epilepsy. "We found that as many as 1 in 4 children with epilepsy have a genetic syndrome", explains Professor Sameer Zuberi, corresponding author for the study, "and a small group of genes explains most of the cases."

Among these genes is CDKL5, which encodes a protein necessary for proper brain functioning. Mutations in the CDKL5 gene produce CDKL5 Deficiency Disorder, with one of the first symptoms being early-onset epilepsy. There is no therapy approved for treating the disease now known to affect thousands of people.

But therapies are being developed and the disease has recently attracted much interest from the pharmaceutical industry. There are four clinical trials currently ongoing, and additional companies have announced efforts towards the development of enzyme replacement and gene therapies.

The new disease incidence study highlights the need to increase disease awareness around these genetic disorders previously thought to be much more rare. "Our data suggest that genetic testing should be a primary investigation for epilepsies presenting in early childhood," explains Professor Sameer Zuberi.

Most of these cases are due to de novo (spontaneous) mutations, so they can occur in any family. But genetic testing is not offered to many patients with early childhood epilepsy and neurodevelopmental disabilities. Because of that, only about 10% of all people living with CDKL5 Deficiency Disorder might have a correct diagnosis.

"These new incidence findings demonstrate that there is still much work to do to diagnose CDKL5 Deficiency Disorder correctly," explains Daniel Lavery PhD, Chief Scientific Officer of the Loulou Foundation. "As we partner with pharmaceutical companies to develop new therapies and cures for the disorder, we also need to find the thousands of people that are living with this condition so that they can access these new therapies," he adds. 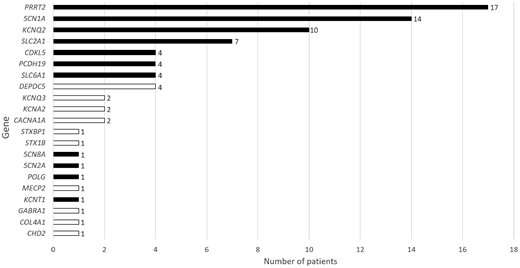 Genetic results. No case had more than one diagnostic result. Shaded bars represent genes for which there is evidence for precision therapy.

Abstract
Epilepsy is common in early childhood. In this age group it is associated with high rates of therapy-resistance, and with cognitive, motor, and behavioural comorbidity. A large number of genes, with wide ranging functions, are implicated in its aetiology, especially in those with therapy-resistant seizures. Identifying the more common single-gene epilepsies will aid in targeting resources, the prioritization of diagnostic testing and development of precision therapy. Previous studies of genetic testing in epilepsy have not been prospective and population-based. Therefore, the population-incidence of common genetic epilepsies remains unknown. The objective of this study was to describe the incidence and phenotypic spectrum of the most common single-gene epilepsies in young children, and to calculate what proportion are amenable to precision therapy. This was a prospective national epidemiological cohort study. All children presenting with epilepsy before 36 months of age were eligible. Children presenting with recurrent prolonged (>10 min) febrile seizures; febrile or afebrile status epilepticus (>30 min); or with clusters of two or more febrile or afebrile seizures within a 24-h period were also eligible. Participants were recruited from all 20 regional paediatric departments and four tertiary children's hospitals in Scotland over a 3-year period. DNA samples were tested on a custom-designed 104-gene epilepsy panel. Detailed clinical information was systematically gathered at initial presentation and during follow-up. Clinical and genetic data were reviewed by a multidisciplinary team of clinicians and genetic scientists. The pathogenic significance of the genetic variants was assessed in accordance with the guidelines of UK Association of Clinical Genetic Science (ACGS). Of the 343 patients who met inclusion criteria, 333 completed genetic testing, and 80/333 (24%) had a diagnostic genetic finding. The overall estimated annual incidence of single-gene epilepsies in this well-defined population was 1 per 2120 live births (47.2/100 000; 95% confidence interval 36.9-57.5). PRRT2 was the most common single-gene epilepsy with an incidence of 1 per 9970 live births (10.0/100 000; 95% confidence interval 5.26-14.8) followed by SCN1A: 1 per 12 200 (8.26/100 000; 95% confidence interval 3.93-12.6); KCNQ2: 1 per 17 000 (5.89/100 000; 95% confidence interval 2.24-9.56) and SLC2A1: 1 per 24 300 (4.13/100 000; 95% confidence interval 1.07-7.19). Presentation before the age of 6 months, and presentation with afebrile focal seizures were significantly associated with genetic diagnosis. Single-gene disorders accounted for a quarter of the seizure disorders in this cohort. Genetic testing is recommended to identify children who may benefit from precision treatment and should be mainstream practice in early childhood onset epilepsy.