A simple blood test could potentially help triage and evaluate patients in the emergency department with suspected traumatic brain injury (TBI) and normal CT findings, according to an August 23 report in The Lancet Neurology.

The blood test, which is under development, measures the concentration of glial fibrillary acidic protein (GFAP), a protein considered to be a specific biomarker of astrocyte injury, which tends to be elevated with TBI.

The multi-center study included 450 suspected TBI patients who had normal CT scans and underwent testing with GFAP and MRI. MRI detected numerous head injuries missed by CT, and the analysis found that patients with the highest concentrations of GFAP were far more likely to have an MRI that indicated TBI.

“This study builds upon a lot of prior work and excitement about the promise of biomarkers in the treatment of traumatic brain injury,” said lead author Geoffrey Manley, MD, PhD, professor and vice chair of neurosurgery at University of California, San Francisco.

In the case of GFAP, “the biomarker appears to be more sensitive than a head CT for diagnosing traumatic brain injury,” he said.

The biomarker test, under development by Abbott and still in clinical testing, is conducted using a hand-held blood analyzer that delivers results in about 15 minutes, Dr. Manley said.

Another biomarker test for mild TBI (concussion) was given the go-ahead by the US Food and Drug Administration (FDA) last year, but it is more of a traditional lab test with results taking several hours. That test, marketed by Banyan Biomarkers, measures two biomarkers, GFAP and UCH-L1 and is intended for use in patients being considered for initial CT scanning.

Patients with a suspected head injury are typically given a CT scan to rule out brain swelling and bleeding. If the scan appears abnormal, further evaluation with MRI may be done. Dr. Manley said it is not unusual for patients to be sent home from the emergency department thinking they have nothing to worry about when they in fact have mild TBI. 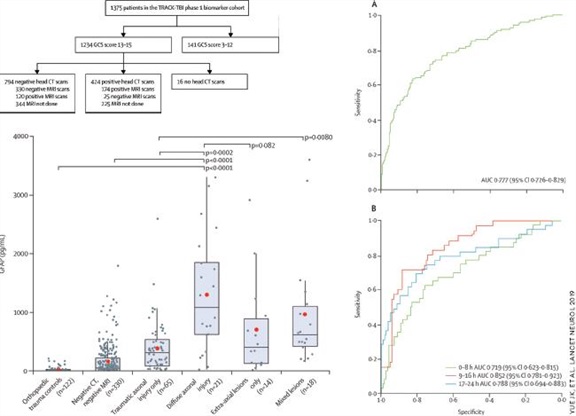 Plasma GFAP concentration using a point-of-care platform (A) shows fair discrimination (AUC 0.777) between patients with MRI-positive findings and patients with MRI-negative findings in patients with CT-negative traumatic brain injury. GFAP at 9-16 hours post injury (B) shows improved discrimination to good—area under the curve (AUC) 0.852—suggesting temporal effects of GFAP release or accumulation in the systemic circulation after traumatic brain injury and time for optimal or repeat measurement.

Dr. Manley said that he does not believe that GFAP or any other biomarker will be the singular tool for diagnosing TBI. He expects that like with heart attack, where troponin testing is one component of evaluation, TBI biomarkers will be among several diagnostic tools used to arrive at a firm diagnosis.

“I see this as being a triage tool,” he said, but cautioned that the study included only adult patients who got to the emergency room because of a car accident or a fall. He said more research is needed before he could say whether the test “is ready for use in kids with concussions.”

The latest report on the GFAP biomarker test stems from a study known as TRACK-TBI (Transforming Research and Clinical Knowledge in Traumatic Brain Injury), a large prospective study being conducted at 18 Level 1 trauma centers in the US. A sub-analysis was done of 450 of the participants, most of whom were classified as having mild TBI due to a traffic accident or fall. They all had normal findings on CT scan (and a Glasgow Coma Scale score 13-15) and consented to the blood test within 24 hours of their injury and an MRI scan seven to 18 days post-injury. The study also included orthopedic trauma patients and healthy controls for comparison.

“These results indicate that the diagnostic utility of GFAP might extend beyond CT-visible pathology and might help to identify patients with more subtle injury,” the researchers said....

Dr. Lecky said the findings that GFAP concentration at nine to 16 hours post-injury discriminated well between patients with MRI-positive findings and MRI-negative findings were positive.

“These results are promising,” she wrote, “but, as the investigators acknowledge, are some distance from suggesting that GFAP assays should become part of current emergency department management of patients with TBI and negative CT scans. The clinical significance of the positive MRI findings is unknown; data on patient symptom severity at 2 weeks or later follow-up were not reported in the study. If the frequencies of disabling concussion symptoms do not differ in the MRI-positive and MRI-negative cohorts during follow-up, it is hard to argue that either GFAP or the MRI scans are providing key information to guide further management.”

She noted that nearly half of the study participants with “negative CT scans did not have MRI as part of their follow-up, and because their characteristics are not reported, it is difficult to assess the potential for selection bias.”

In addition, she said it would be time consuming and expensive to do an MRI on every suspected TBI patient who had a normal CT.

Dr. Lecky said a biomarker test could be useful for sorting out which suspected TBI patients need head imaging and/or medical follow up, but she cautioned that t he biomarker test needs to be further investigated before it is ready for clinical use.

Methods
TRACK-TBI is a prospective cohort study that enrolled patients with TBI who had a clinically indicated head CT scan within 24 h of injury at 18 level 1 trauma centres in the USA. For this analysis, we included patients with normal CT findings (Glasgow Coma Scale score 13–15) who consented to venepuncture within 24 h post injury and who had an MRI scan 7–18 days post injury. We compared MRI findings in these patients with those of orthopaedic trauma controls and healthy controls recruited from the study sites. Plasma GFAP concentrations (pg/mL) were measured using a prototype assay on a point-of-care platform. We used receiver operating characteristic (ROC) analysis to evaluate the discriminative ability of GFAP for positive MRI scans in patients with negative CT scans over 24 h (time between injury and venepuncture). The primary outcome was the area under the ROC curve (AUC) for GFAP in patients with CT-negative and MRI-positive findings versus patients with CT-negative and MRI-negative findings within 24 h of injury. The Dunn Kruskal–Wallis test was used to compare GFAP concentrations between MRI lesion types with Benjamini–Hochberg correction for multiple comparisons. This study is registered with ClinicalTrials.gov, number NCT02119182.

Interpretation
Analysis of blood GFAP concentrations using prototype assays on a point-of-care platform within 24 h of injury might improve detection of TBI and identify patients who might need subsequent MRI and follow-up.