At first I asked if this was from The Onion, because honestly after reading I wasn’t sure. 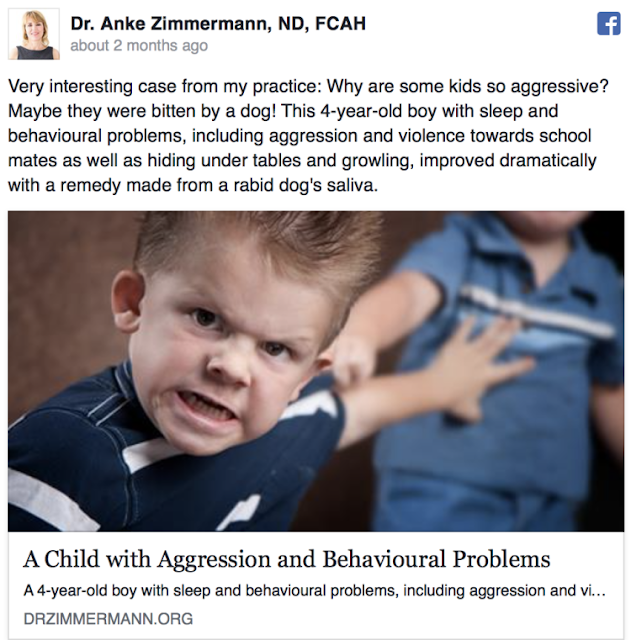 But no, Dr. Zimmerman is really a naturopath and, well, this is how she summarized the problem…

This is a 4-year-old boy who is suffering from an inability to fall asleep at night, a fear of the dark, of wolves, werewolves, ghosts and zombies and who frequently hides under tables and growls at people. He is overly excitable and has a tendency to defiance. He was normal as a baby, not affected by sleep or temper problems.

It is clearly a great business model to medicalize the fear of monsters, excitability, and defiance in 4-year-olds, either that or developmental pediatrics is not a subject taught in naturopathic schools. Maybe it would detract from Tinctures 101.

Dr. Zimmerman’s diagnosis was a previous bite from a dog recently vaccinated with rabies thus affecting “the boy with the rabies miasm.”

I am totally sure that was first on every pediatrician’s list as well.

I had to look up “miasm” because it sounded like a totally made up word. A miasma is “the ghost of the disease state still rampant in the energy system.” So it’s a word for a totally made up illness. Rabies is a killed virus, so I guess the ghost of rabies walks among those who have been vaccinated just looking to infect victims? That sounds more like a zombie, but perhaps I’m splitting hairs.

Also, that’s not how germ theory works, but whatever.

It actually gets worse as Dr. Zimmerman treated this terribly affected, yet normal 4-year old with a homeopathic remedy called lyssinum, which claims to be made from rabies, because obviously homeopathy treats like with like.

At first I thought, okay, she is some rogue homeopathy but, yeah, nope. HuffPost in Canada e-mailed the homeopathic board that oversees Dr. Zimmerman and as far as they are concerned DILUTE RABIES SALIVA IS A LEGIT HOMEOPATHIC TREATMENT.

Health Canada also has this product under the names lyssin and hydrophobium (okay, that last one made me laugh a little).

Naturopaths who use this must believe that somewhere, at some point in time after 1895 some brave naturopath was able to get saliva from a rabid dog without getting rabies and then handle the virus safely to dilute it out of existence. Getting the virus would not have been impossible in those days, obvious Louis Pasteur and Edward Jenner were working with viruses that could have killed them without a level 2 biosafety lab, but then again they didn’t believe that the viruses could kill via ghost action.

Then there is the whole concept that you are claiming to have a pill or a tincture or whatever made from a virus with essentially a 100% mortality (there have been three known survivors). Obviously, the pills/tincture are placebo, but the idea is a bit disconcerting,

And of course the idea that you are treating a ghost illness with a zombie of a virus that has been diluted so much it doesn’t really exist.

This is so ridiculous it is offensive.

While no child is going to be harmed with this placebo therapy there is obviously the possibility there could have been a real medical condition that required therapy (And the waste of money).

The thing that bothers me the most though is naturopaths also push Lyssin/Lyssinium as a way to vaccinate animals against rabies. Put aside the idea that they believe the vaccination of a dog and the treatment of a child’s behavior requires the exact same medicine and just think about the damage that could be done if more people stop vaccinating their dogs and cats against rabies, a disease with essentially a 100% mortality that is also essentially 100% preventable.

This whole idea would be ridiculous if it were not so enraging.