The mice behaved just like others of their kind, as far as scientists could tell, and they also looked the same — except for the human mini brain that had been implanted into each rodent’s own cortex, made visible by a little clear cover replacing part of their skull. 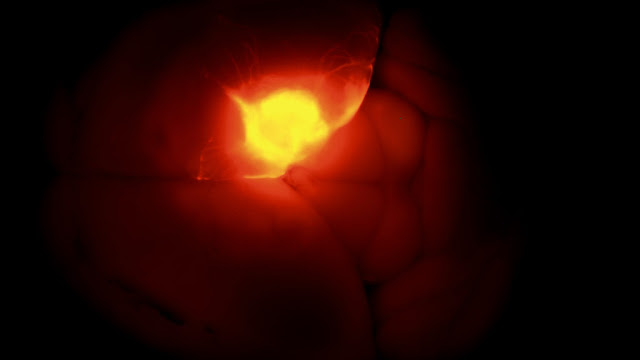 The report on Monday by scientists at the Salk Institute is the first publication describing the successful implant of human cerebral organoids into the brains of another species, with the host brain supplying the lentil-sized mini cerebrums with enough blood and nutrients to keep them alive and developing for months. It won’t be the last, as scientists use the approach to understand human brain development and test whether the tiny entities might one day serve as cortical repair kits, replacing regions of the brain that have been injured or failed to develop normally.

When the Salk researchers briefly described their experiments last November at the annual meeting of the Society for Neuroscience, bioethicists raised questions about what implants of human brain organoids would do to mice’s intelligence, consciousness, and even their identity as mice. The published paper, in Nature Biotechnology, fills in details about how successfully the human organoid integrated into the mouse brain and addresses one of those concerns: At least in the tests the scientists ran, the mice with human brain organoids seemed no different, and no smarter, than standard lab mice.

Since the first human brain organoids were created from stem cells in 2013, scientists have gotten them to form structures like those in the brains of fetuses, to sprout dozens of different kinds of brain cells, and to develop abnormalities like those causing neurological diseases such as Timothy syndrome. Researchers hope the organoids will be better than lab animals or cells growing in culture at revealing how the human brain develops, both normally and when things go awry, and identify potential therapeutic or genome-editing targets.

The basic recipe takes human stem cells, makes them differentiate into brain cells, and lets them grow into entities a few millimeters across that mimic the structure, cell populations, and even the electrical activity of the full-blown version.

But the verisimilitude of human brain organoids has been limited: Once they grow more than a few millimeters across, oxygen and nutrients can’t get to their innermost cells. “In our hands, the organoids stop growing around five weeks,” said Salk’s Fred Gage, who led the study. “It’s a function of size rather than time. We see some cell death even in the edge of the organoids starting at 10 weeks, which becomes really dramatic over time. This is an obvious hurdle for longtime study” if the goal is to follow brain development for longer than a trimester or two prenatally, the stage at which the current crop of brain organoids start to wither. Implanting human brain organoids in a mouse brain gives them everything they need to grow and develop.

The Salk team therefore took human brain organoids that had been growing in lab dishes for 31 to 50 days and implanted them into mouse brains (more than 200 so far) from which they had removed a tiny bit of tissue to make room. Because the human cells had been genetically engineered to express green fluorescent protein, the tiny blobs showed up in brilliant lime through the transparent window that the scientists glued into the mice’s skull.

Some 80 percent of the implants took. Within two to 12 weeks, the organoids were sprouting additional neurons, including ones found in very specific regions of the human cortex; glia cells including astrocytes; and neural stem cells. By 14 days almost all the organoids had developed a rich network of blood vessels carrying nutrients and oxygen, allowing them to survive for up to 233 days. Their structure and cell maturation was that of a newborn.

The implanted organoids were also sending axons — the biological wires that carry brain signals from one neuron to another — into both sides of the mouse brain, not only the side with the window, and forming such strong synapses with mouse neurons that the neural activity of the two species was synchronized.

“When neurons fire together, that means they are connected and [engage in] cross-talk,” said Salk’s Abed Mansour, the paper’s lead author, forming “neuronal networks.”

For all the human-mouse mixing, however, the rodents were no better learners than those with mouse-only brains. The scientists put the mice onto a circular platform with 20 holes around the edge, gently guiding them to the one hole that led to an escape tunnel and then letting them try it themselves to test their memory. (The other holes were dead ends.) On the first day of testing, the mice with human brain organoids made fewer mistakes, finding the right hole more often, but this edge vanished by the second day.

“We are just scratching the surface” in terms of behavior tests, Gage said. “I think it’s early to provide solid answers to this important question.” The escape-hole test is very specific, he pointed out: “I can’t exclude at this point other behavioral impacts.”

Differentiation of human pluripotent stem cells to small brain-like structures known as brain organoids offers an unprecedented opportunity to model human brain development and disease. To provide a vascularized and functional in vivo model of brain organoids, we established a method for transplanting human brain organoids into the adult mouse brain. Organoid grafts showed progressive neuronal differentiation and maturation, gliogenesis, integration of microglia, and growth of axons to multiple regions of the host brain. In vivo two-photon imaging demonstrated functional neuronal networks and blood vessels in the grafts. Finally, in vivo extracellular recording combined with optogenetics revealed intragraft neuronal activity and suggested graft-to-host functional synaptic connectivity. This combination of human neural organoids and an in vivo physiological environment in the animal brain may facilitate disease modeling under physiological conditions.