A 30-year-old climber, Honnold is known as the master of a discipline known as free solo climbing, which involves scaling vertical walls without the help of ropes, harnesses, or anything that might break a fall.

The penalty for failure on those climbs is death.

Most of us would be overcome by fear long before we hauled ourselves ropeless up the first 100 feet of the 2,500 foot El Sendero Luminoso limestone cliff in Mexico, which Honnold scaled in 2014. Yet somehow he remains calm, no matter what — to the point that he's known as Alex "No Big Deal" Honnold. 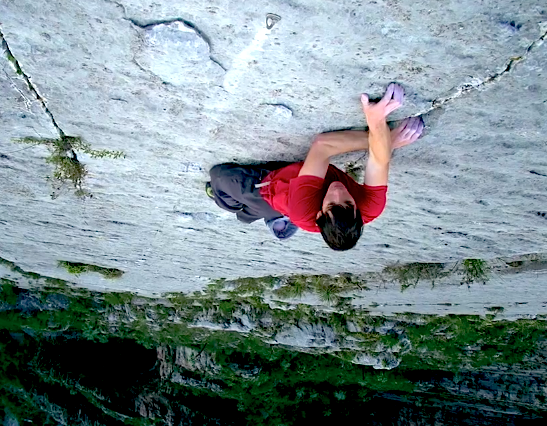 People always him if he's fearless, to the point that he's said he gets tired of answering the same questions. But it's a fair question — is there something different about Honnold's brain? Is he truly fearless?

The climber has always insisted that he does feel fear, he just prepares to the point that he knows he'll be able to accomplish his goal by mentally rehearsing everything that could happen. Yet some of his climbs, including at least one recent one up a route he'd never ascended before, make you wonder if he really understands what it's like to be afraid.

To get to the bottom of that, journalist J.B. MacKinnon, writing for Nautilus, asked Honnold if he'd be willing to get a brain scan with an MRI.

Cognitive neuroscientist Jane Joseph of the Medical University of South Carolina agreed to do the scan. Mainly, she was looking to answer two questions: First, if he had a healthy amygdala — the part of the brain that responds to threatening or scary stimuli (and controls many of our reactions to other phenomena) — what was happening there? And second, what drives him to do this? Is it a pursuit of some rewarding feeling, some hit of dopamine?

The full Nautilus story is worth a read, but basically, Joseph and others who reviewed the MRI found nothing wrong with Honnold's brain. His amygdala was there and didn't seem damaged. However, there was no activity there even when the research team showed him a series of images designed to get that region firing — disturbing and shocking things. Another climber whose brain was used a control lit up just as expected, but Honnold's remained silent.

It seems that despite the normal physiology, there was nothing that looked like a normal fear response.

The reward response showed interesting results as well. Things that would normally trigger a surge just didn't. Basically, Honnold was an extremely high sensation seeker, according to Joseph. Basic "reward tasks" weren't interesting enough. He sought out what most people consider insanely thrilling or dangerous sensations in order to feel satisfied, and for him (perhaps especially due to his fear response), that meant free solo climbing.

But that still leaves the question of why Honnold's brain works the way it does when confronted with frightening stimuli. To understand that, we have to go back to the explanations Honnold has always given — he understands that some moments are scary, but is able to mentally work past them…

"Particularly if it's a free solo, I'm climbing ropeless, then I'll think through what it'll feel like to be in certain positions, because some kinds of movements are insecure and so they're kind of scarier than other types of moves, and so it's important to me think through how that'll feel when I'm up there, so that when I'm doing it I don't suddenly be like 'Oh my God, this is really scary!' I know that it's supposed to be scary, I know that's going to be the move, I know what it'll feel like, and I just do it."

Honnold's mental prep sounds like a psychological technique known as "mental rehearsal," which is used to get ready for anything difficult. Research has shown it can help doctors perform better. Astronauts like Chris Hadfield say it's an essential part of their preparation for spaceflight.

If you've already thought through how everything could feel, even when it goes wrong, you're prepared if things actually do go south.

Rehearsing the way that certain scary moments will feel means that those moments feel "right" when they happen, instead of feeling surprising. In Honnold's case, we can't know exactly why his brain didn't perceive the stimuli as worthy of amygdala activation. Perhaps his probably already naturally hard-to-trigger fear response has been essentially trained out of him through his own mental exercises. Joseph thinks you could probably still trigger it, it would just take something a whole lot more intense.


Video at link
Posted by Galen Breningstall, MD at 10:36 PM