When Molly Duffy and Robbie Edwards, both 3, met in person for the first time at Boston Children’s Hospital in November, it was like they’d been best friends forever.

The tiny tots, who both have light brown hair, sparkling blue eyes and infectious, toothy grins, could pass for sisters. They both love listening to “Wheels on the Bus,” playing house in their miniature toy kitchen sets and spending time outside.

But another commonality unites the toddlers, who are the only known people in the country, and two of 11 in the entire world, diagnosed with an extremely rare disease called SPG-47 or hereditary spastic paraplegia type 47 that causes a decline in everyday cognitive and physical functions.

Doctors say their symptoms, which currently include difficulty walking and talking, will worsen over time — most likely shortening their lives.

When doctors told Kasey and her husband Chris Edwards, 41, about their daughter’s rare diagnosis in May 2016, they felt devastated and alone.

“It was surreal. We wept and said, ‘This can’t be,’ ” says Kasey, also mom to 5-year-old son Davis. “No one knows much about the condition, so we knew our world would be completely changed. But we weren’t going to let it derail our train.”

The Boston parents began researching Robbie’s SPG-47 diagnosis, a particular subtype of hereditary spastic paraplegia that, in addition to causing the progressive decline of motor functions, leads to severe cognitive delays and microcephaly. They found only nine other known children with the condition and none were in the U.S.

But, in what they describe as a “miracle meeting,” Kasey and Chris connected with Molly’s parents Angela and Kevin Duffy, both 33, in August through a Facebook support page for parents of children with SPG.

“We thought she was the only person in America with this type of SPG,” Angela tells PEOPLE of Molly, who was diagnosed with SPG-47 a year ago. “There are over 50 types of SPG, but Molly and Robbie are the only ones with type 47. Until we found Robbie, we thought we were so alone in this journey.

“But now we have each other.”

“They’re in this fight together,” says Robbie’s mom, Kasey Edwards, 38. “Their futures are intertwined, as we look to the future.” 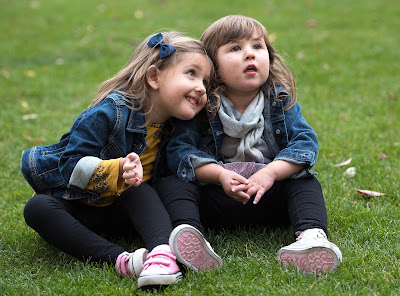 Like most 3-year-olds, Robbie Edwards loves action. But Robbie faces more challenges than most her age.

Last summer, an MRI revealed a genetic cause for Robbie's developmental delays. She was diagnosed with an ultra-rare sub-type of hereditary spastic paraplegia called SPG 47. The brain can't correctly produce a protein needed for central motor neurons to function properly. At the time, there were only nine known cases in the world.

At this point, what researchers do know is there is no cure and patients lose mobility. In the already documented cases, patients have developed paraplegia and quadriplegia.

Dr. Basil Darras, a pediatric neurologist at Boston Children's Hospital who studies SPG 47, described some of the symptoms.

"Instead of having tight muscles, the muscles are floppy and they have low tone. Sort of unusual," Darras said. "As time goes on, they develop spasticity. As we see with kids who have cerebral palsy."

It was a devastating finding for Robbie's parents, Kasey and Chris. So Kasey went online, reading research papers and joining forums for parents with children diagnosed with similar diseases.

In September, in one of those parent forums, the unexpected happened.

Kasey said, "It was disbelief at first. I just thought, oh, he, that's a typo."

Despite the extreme rarity of SPG 47, another parent in the forum shared his daughter also had the genetic mutation. It was a sudden link to someone going through exactly what they were.

Chris said, "We realized that we weren't completely alone in this."

The Duffy family lives in Philadelphia and their 3-year-old daughter, Molly, also has SPG 47. The girls are the only known cases in the U.S. Through Facetime, the families got to know each other and last month, they met at Children's Hospital in Boston. That meeting full of smiles, hugs and the beginning of a friendship that is now the force behind their nonprofit, Cure SPG 47.

Chris said, "We're facing pretty much impossible odds, we know that but you know, we're not going to give up on our kids."